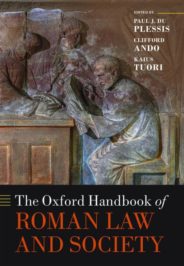 The Oxford Handbook of Roman Law and Society

Aside from the field of history itself, few disciplines routinely reach out to texts dating back several millennia to reassess fundamental issues. Theology is one, for obvious reasons. Another is philosophy, where the texts of Plato or Aristotle, not to mention more obscure writers, routinely warrants attention. In legal scholarship, a similar foundational position is held by Roman law. It formed the fundamental framework of legal thought which still unites Western law.

New scholarship claims that it offers new approaches to the study of Roman law. What makes these approaches new?

The dirty secret of all studies on classical Antiquity is that rather than improving, the knowledge basis of your average scholar is actually getting worse. The scholars of nineteenth-century had read Latin and Greek from childhood, from the modern standpoint enormous parts of the school curricula were devoted to ancient languages and cultures. It’s simply not possible that one could now reach the same fluency with ancient languages, cultures, and laws as was normal for scholars then. However, these studies were tinted with idealization and selective readings guided by classicism. The classics were read with an eye for the present, a male upper-class white reading that supported the world views of the elite. Traditional Roman law was similarly used to legitimize and to give a pedigree to the existing legal orders.

New studies set out to change the perspective of the reader to include the persons, groups, and things that were previously invisible. Women, the lower classes, slaves, and foreigners are given a prominent place in this new history. Their agency, often in contrast to the rules of the law, is highlighted. In her work, Verena Halbwachs elaborates how despite the official exclusion from legal agency and public office, women were prominent in the actual legal cases as active participants.

While the earlier classicizing history writing relied on the establishment of a connection and identification between the classics and the reader, the new history of Roman law seeks to demonstrate how the past is truly a foreign country. The influence of religious rituals is demonstrated, the permanence and permeability of patriarchal structures and social conventions is explored and the pluralism of legal regimes, especially in the provinces, is underlined. Rejecting the neat and logical, even quasi-modern idea of classics, these studies establish a new way of looking at the often messy interaction between the rules and practice of law, not simply the law in books, but also the law in action. For example, Christopher Fuhrmann dispenses with the myth that ancient Rome was a society without police and examines the different forms of public order and security that have thus far been overlooked.

In addition to examining social and cultural practices and their implications for the law(s), they apply many of the methodologies of contemporary social sciences to ancient materials, from anthropology to economic theory. What this means is that the new approaches are used to help frame new questions and new answers to old questions. Like the heterogeneous field of studies titled “law and …”, law and society, law and economics, law and literature, law and anthropology, the aim is to critique, to subvert, and to complement the traditional approach to law with novel ways of looking at law in society. For example, Michèle Lowrie approaches the texts of Roman law as texts between orality and literacy, drawing inspiration from speech act theory.

Not long ago, professor Bruce Frier, wrote about the “descent of Roman law into history,” meaning the transmission of interest in Roman law from law schools into the departments of history or classics. Whether such a move is happening is questionable on a global scale, as is evident from the strength of the scholarship taking place in law schools (over half of the authors are lawyers by training or working at law schools), I would in fact describe the phenomenon as the opening up of Roman law. Not only has the field been enriched by scholars from classics and history, but equally the broadening of methodological horizons has given scholars new tools and helped them participate in new discussions.

Kaius Tuori is associate professor of European intellectual history at the University of Helsinki. He is co-editor of The Oxford Handbook of Roman Law and Society and the author of The Emperor of Law: The Emergence of Roman Imperial Adjudication (OUP 2016).