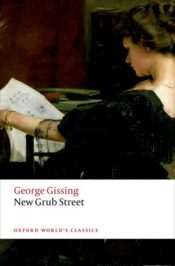 Sitting alone in front of a computer screen, a writer sometimes feels like screaming at the machine to make the words appear. When inspiration finally strikes, the result may be far from satisfying—but when your next meal is at stake, it hardly matters.

The plight of the author hasn’t changed much since George Gissing wrote about this dilemma in his novel New Grub Street. Written in 1890 and loosely based on Gissing’s own experiences, it features a struggling writer named Edwin Reardon. Reardon must decide between writing long-form literary novels to satisfy his soul or “selling out” and writing shorter commercial fiction to provide for his wife and child.

His livelihood, reputation, and marriage all hang by a thread, dependent upon the weight of his next review. His health suffers, as does his sanity. He envies his colleagues their success, particularly the journalist Jasper Milvain, who encourages Reardon to write more commercially viable content. Despite his own near poverty, Milvain maintains the reputation of a “man about town” and finds success through his social connections writing for a magazine The Current. He vows never to write anything of solid literary value, as it would interfere with his ambition for wealth.

Gissing lets us inside a London not unlike any modern day metropolitan city. Intellectualism is respected but kept at arm’s length, while mainstream commercialism is embraced. Writers sell their possessions both prized such as books and unnecessary like clothing to keep themselves afloat. Some take up side jobs as clerks and tutors to pay the bills. At one point, Reardon muses with fellow down-and-out writer Harold Biffen that suicide may be preferable to their poor existence.

The situation in New Grub Street certainly feels familiar given that bodice rippers and celebrity self-help books frequently outsell novels destined for the Nobel or Man Booker Prize. At one point, Milvain proposes writing a book to fit a catchy title (he suggests The Weird Sisters as an example), rather than naming it after completion, but this idea fills Reardon with misery. Sensible as it seems, it would go against every principle he has.

The only difference I find between Gissing’s London and the world we live in today is the power of the critic. In Reardon’s quest for financial success, one bad review can put everything in jeopardy. Whether the book is truly a poor read is immaterial, and the risk of a bad review is high, as he has no friends among the journalists.

Critics hold power in Milvain’s life as well, though for a different reason: Milvain’s plans to marry his neighbor Marian Yule and gain access to her substantial inheritance are thwarted by her father Alfred Yule because Yule, a critic himself, was slighted decades earlier by Milvain’s employer, the editor of The Current, causing a lifelong vendetta.

These days, on the other hand, a harsh review does not automatically result in commercial failure. A novel well received in The New York Times can suffer from lack of exposure on Twitter and Goodreads. However, a handful of five star reviews on Amazon can propel a critical failure into a best seller.

As Milvain flourishes, Reardon’s world crumbles. The former finds success and happiness through calculated design while the latter feels his soul ache every time he abandons his principles. Therein lies the truth that Gissing understood all too well. Pouring your heart out into pages may or may not lead to a comfortable lifestyle. Those who know the system, rub shoulders with influential people, and write with the purpose of raking in cash tend to succeed more readily.

Even today the coffee houses and tenement buildings of cities like New York, Los Angeles, and London are teeming with starving artists. Authors, screenwriters, actors, painters, dancers, musicians, etc., it always comes down to the same set of quandaries, “sell out,” or give up and get a different job, and eat well. Or, keep making the art you believe in. Because despite all the hardships, at the end of the day, it’s the one thing you can rely on to bring you fulfillment.

Reneysh Vittal is a writer, editor, and cultural critic. His work has appeared on VICE, Narratively, TOR, The Rumpus and NPR. Read more work at www.RVittal.com and follow him on Twitter @ReneyshV.