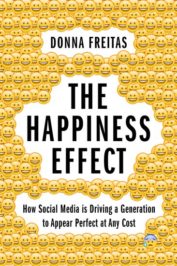 The Happiness Effect: How Social Media is Driving a Generation to Appear Perfect at Any Cost

With so much information available online, it’s easier than ever for employers to spot potential red-flags on social media profiles. In this shortened excerpt from The Happiness Effect, author Donna Freitas explains the “Facebook Cleanup,” and how university students are designing their profiles with future employers in mind.

The notion that we are using social media to police, spy upon, and subsequently judge our children, students, and future employees (how­ever well-intentioned we might be in doing so) is rather chilling. In It’s Complicated: The Social Lives of Networked Teens, danah boyd alludes to a generational conflict around the idea of privacy, and that even posts that teens make in public forums like Facebook deserve to remain pri­vate from certain constituencies (namely parents), much like the diaries of old that teens kept to record their most secret thoughts and feelings. The widely accepted notion that all young adults today over-share and therefore don’t care about privacy is wrong according to boyd, and she argues passionately that we’ve misunderstood teens’ relationship to pri­vacy—they do desire it, intensely so, and believe that it is inappropriate for “parents, teachers, and other immediate authority figures” to surveil them on social media.

But the college students I interviewed seem to have given up on the idea of retaining any semblance of privacy on social media forums at­tached to their names. They’ve accepted the notion that nothing they post is sacred and everything is fair game for evaluation by anyone with even the littlest bit of power over them—that these are simply the cards their generation has been dealt.

“For college students, the highlight reel is a social media résumé, usually posted to Facebook, which chronicles a person’s best moments, and only the best moments”

Hence, the Facebook Cleanup that so many of the students talked about at length has sprung up in response to the situation that young adults find themselves in today. A Facebook Cleanup involves going back through one’s timeline and deleting any posts that do the following:

Students who aren’t quite sure what to keep or delete can consult nu­merous news articles for advice. The term “Facebook Cleanup” is apt, since students’ fears are very much focused on Facebook rather than other social media sites. Facebook is so ubiquitous among people of all ages, that students consider it the go-to app for employers. As a result, it’s the social network where they feel they need to be most careful, and the professionalization of Facebook where they believe the creation of what they refer to as the “highlight reel” is most essential. For college students, the highlight reel is a social media résumé, usually posted to Facebook, which chronicles a person’s best moments, and only the best moments: the graduation pictures, sports victories, college acceptances, the news about the coveted, prestigious internship you just got. Students often organize their Facebook timelines to showcase only these achievements and use other platforms for their real socializing.

In The App Generation, Howard Gardner and Katie Davis briefly remark on the notion of a “polished,” “shined- up,” “glammed- up” profile, “the packaged self that will meet the approval of college admissions officers and prospective employers.” Students are indeed seeking control of public perception in a sphere where loss of control is so common and so punishing. Gardner and Davis worry that young adults’ belief that they can “package” the self leads to a subsequent belief that they can “map out” everything, to the point where they suffer from the “delusion” that “if they make careful practical plans, they will face no future challenges or obstacles to success.” This makes everyone disproportionately outcome-focused and overly pragmatic, especially in terms of careers, and less likely to be dreamers.

The students I interviewed and surveyed certainly are outcome-focused in their online behavior when it comes to pleasing future employers. But rather than giving the students a false sense of control, which Gardner and Davis find so worrisome, this focus seems instead to make them feel incredibly insecure.

And who can blame them?

“If they are completely absent from social media, this might seem suspicious, too—a future employer might assume the worst about them”

They are acutely aware of the precariousness of their reputations and the potential that their lives could be ruined in an instant. The students I spoke to clearly understand that they lack control because of the way they’re constantly being monitored online. This knowledge was central to nearly every conversation I had…

Appearing happy and positive in order to please potential employ­ers was also of central concern to students. In the online survey, students were asked to reply yes or no to the following statement:

I worry about how negative posts might look to future employers.

Seventy-eight percent of the respondents answered yes. And, when asked about the dos and don’ts of social media, 30 percent said that the main advice they’ve received about social media was related to employment.

Most students feel that they are in a “damned if you do, damned if you don’t” situation. They worry about whether future employers might find an offending photo or post attached to their names. But many of them also worry about what happens if they have no social media pres­ence at all for their future employers to scrutinize and dissect. If they are completely absent from social media, this might seem suspicious, too—a future employer might assume the worst about them (i.e., their photos and posts are so vulgar and unbecoming that they’ve hidden everything from the public). As a result, many students keep their Facebook pages updated with the highlight reel—a G-rated social media résumé that em­ployers are welcome to peruse. As long as employers can find something, and that something is good, students believe they’ve done their social media homework.

Donna Freitas is a Nonresident Research Associate at the University of Notre Dame's Center for the Study of Religion and Society, and when she is not traveling for research she teaches in the Honors Colleges at Hofstra University. She is the author of Sex and the Soul: Juggling Sexuality, Spirituality, Romance and Religion on America's College Campuses (Oxford University Press, 2008), as well as several novels for young adults. A regular contributor to Publishers Weekly, she has also written for The Wall Street Journal, The New York Times, and The Washington Post. She is also the author of The Happiness Effect: How Social Media is Driving a Generation to Appear Perfect at Any Cost.