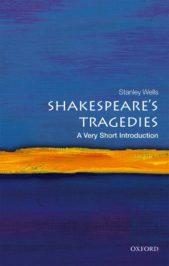 On his recent visit to England Barack Obama chose to tour Shakespeare’s Globe, on Bankside; and in the last days of his Presidency, when interviewed about his reading habits, he spoke touchingly and revealingly of his admiration for Shakespeare’s tragedies, and of what they had taught him. ‘I took this wonderful Shakespeare class in college’, he said, ‘where I just started to read the tragedies and dig into them. And that, I think, is foundational for me in understanding how certain patterns repeat themselves and play themselves out between human beings.’ Like Obama, another American President, Abraham Lincoln, greatly admired Shakespeare’s tragedies, especially Macbeth, ironically since he himself, like Duncan in that play, was to be the victim of an assassin.

Other world leaders, too, have studied and found inspiration in these plays. Winston Churchill contributed a short story to a long-forgotten volume of 1934 called Six Stories from Shakespeare in which he chose to write about Julius Caesar. He displayed a politician’s shrewdness in narrating Brutus’s reasons for the assassination of Caesar, writing ‘Caesar must not even be allowed the chance of going wrong, the seed of potential tyranny must be killed outright, like a serpent in the egg. One could hear the sigh of relief and release with which he finally persuaded himself to acquiesce in this sophistry.’ A Great orator himself, Churchill stands aside from the story of the play to comment on its rhetoric: ‘it can scarcely be necessary to remind the reader of what [Antony] said, for no speech in the history of the world is more famous, none better known. “Friends, Romans, countrymen …” ….the words are alive on every tongue, and custom cannot stale them.’ Those last words show Churchill’s knowledge of another tragedy by Shakespeare: they echo Enobarbus’s description of Cleopatra in Antony and Cleopatra.

Nelson Mandela, like Churchill, appears to have had a special affinity with Julius Caesar. In the famous copy of the complete works of Shakespeare disguised as a Bible that was smuggled into the gaol on Robben Island where he spent part of his long period of imprisonment, he singled out a passage from this play: ‘Cowards die many times before their deaths. / The valiant never taste of death but once.’

For all this, few, if any, of the central characters of Shakespeare’s tragedies are fit to stand as role models for national leaders. In the plays based on English history, Henry VI is a wimp and Richard II a vain, self-centred narcissist who achieves grandeur only in defeat. Richard III is a tyrant who murders his way to the throne.

Shakespeare’s tragedies go on resonating with the times, foreshadowing the shape of things to come with a prescience that can seem uncanny.

Stephen Greenblatt, in a brilliant article published in the New York Times headed ‘Shakespeare Explains the 2016 Election’, has recently compared him to Donald Trump. Only the Earl of Richmond, who becomes Henry VII at the end of Richard III, shows promise as a leader. It is to the non-tragic English history plays that we have to look if we seek a central character who is a natural leader of men, and we may find him in Henry V, a charismatic warrior who is also, like Mark Antony, a master of rhetoric.

In the plays normally classed as tragedies, Othello’s distinction as a leader lies mainly in his past, before the action of the play starts. And King Lear is a spent force long before the play’s opening, in which he gives away his kingdom. Coriolanus is a great warrior, a natural leader of men, but a disaster as a politician, despising the common people and failing in his dealings with them so badly that they banish him. And in Antony and Cleopatra the Mark Antony who in Julius Caesar had succeeded so brilliantly in swaying the citizens of Rome against the conspirators is characterized as having become ‘the bellows and the fan / To cool a gipsy’s lust.’ In this play the successful politician is the coldly unlikable Octavius Caesar, as cold and unlikable here as in the earlier play.

In performance, Shakespeare’s tragedies have often been used for political ends. As early as 1681 Coriolanus was adapted, by Nahum Tate, as The Ingratitude of a Commonwealth to reflect on the ‘Popish Plot’ against King Charles II. A production of the same play at the Comédie Française in 1932 provoked right-wing demonstrations in Paris, and in 1973 John Osborne published A Place Calling Itself Rome, a ‘reworking’ of the play which adopts an emphatically right-wing attitude. In 1937 Orson Welles directed a strongly anti-Fascist Julius Caesar in New York, and Gregory Doran’s 2012 production of the same play with an all-black cast suggested comparisons with tyrannical African regimes of our time.

As Mr Obama suggested, Shakespeare’s tragedies go on resonating with the times, foreshadowing the shape of things to come with a prescience that can seem uncanny.