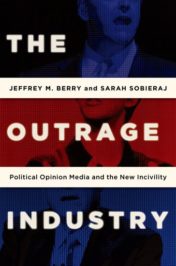 The Outrage Industry: Political Opinion Media and the New Incivility

Fake news has always had a presence American politics. No less an august figure than Benjamin Franklin partook of the practice. In 1782 Franklin generated a fake version of a real Boston newspaper, featuring his own inspired but false story about American troops uncovering bags of scalps to be sent to the King of England. As the story was spun, the scalps were intended to win the King’s friendship toward Native Americans. Franklin hoped that the story would turn British citizens against the Crown.

Since Franklin’s time, fake news has taken on different forms. In the past it has sometimes come from mainstream sources, as was the case with Yellow Journalism. Today, insurgent media are the primary source. However fake news is manifested, it is characterized by sensationalism—headlines that prove irresistible, content that is compelling, and a story line that “uncovers” a scandal or an injustice. In the 2016 election the fake news stories about Hillary Clinton’s health were a staple of the genre. One piece said she had a blood clot surgically removed from her brain and then, shortly thereafter, Clinton’s henchman killed the doctor, Sandeep Sherlekar, to keep him from exposing the surgery. Poor Dr. Sherlekar did die but he committed suicide after being indicted in an alleged kickback scheme involving urine samples.

More disturbing is the case of the gunman, Maddison Welch, who wanted to “shine some light” on a Washington pizza parlor, Comet Ping Pong, which fake news had identified as the center of a Hillary Clinton underage sex ring. Arrested after firing his gun inside the restaurant, Welch subsequently told the New York Times that “The intel on this wasn’t 100%.”

Although there is historical continuity in the fallibility of those who accept fake news as real, the business side of fake news today is fundamentally different than in the past. Whereas Ben Franklin had to find a printer, produce many copies of the fake issue, and then hand them out to friends to circulate, fake news can now be distributed instantaneously and almost without cost. The reduction in barriers to entry have fundamentally altered the media industry. Consider the evolution of television. When there was only broadcast TV, the early network entrants, ABC, CBS, and NBC, quickly became an oligopoly because the newly established value of a nationwide set of local TV stations created a prohibitive barrier to entry. When cable technology emerged, however, the barrier to entry fell as affiliate stations were no longer necessary. The technology also created advertising efficiencies and programming for niche markets became economically feasible. The result was the Golf Channel, Fox Cable News, the Home Shopping Network, food channels, and other narrowly focused enterprises.

Anyone with a laptop and an Internet connection can be in the news business.

The Internet is the ultimate equalizer as it demolished the existing barrier to entry for those who would like to be in the news business. Conventional newspapers have not been able to monetize their online presence while news websites without newsrooms have proliferated. Anyone with a laptop and an Internet connection can be in the news business (such as the rise of “citizen journalists”). Quality, of course, is another matter but when it comes to fake news, it is sensationalism and “clickability” that is most critical.

The capital requirements for creating fake news stories are not only infinitesimal—only an imagination is required—but the costs of distribution are negligible as well. The technologically savvy can create bots which propel stories back and forth among fake accounts, scoring hits and likes and pushing these articles to the top of trending news on Facebook and Google. Placed on a website, a story can be linked to an advertising service which generates a few pennies per clickthrough. Solutions are elusive. Fact checking fake news is ineffective—stories multiply faster than legitimate news sites can discredit them. With the unquenchable thirst of the 24 hour news cycle, cable TV and talk radio often cover political accusations as news stories, alleviating themselves of the responsibility to without the need to verify their accuracy. Thus, on his show on Fox Cable Sean Hannity might discuss accusations that were made by Breitbart, which in turn was covering incendiary charges made earlier in the day by radio host and conspiracy theorist Alex Jones. The biggest megaphone of all for fake news belongs to Donald Trump, who can dominate a news cycle even with a story that is immediately refuted, such as his tweet that there was evidence that three million voted illegally.

In our current media environment outrageous content is what attracts audiences and, therefore, advertising. Legal remedies for even the most scurrilous of stories are beyond what’s realistically possible. Distribution often emanates from foreign servers such as those based in Macedonia, home to many fake news sites.

Scholars don’t know what impact fake news had on the 2016 election and we may never really know. News consumers have a strong selection bias as they make choices among conventional media, websites, tweets, and Facebook postings. The density and velocity of fake news is an overwhelming tide that provides stiff competition to mainstream news sources. Unfortunately, in terms of its economic efficiency, fake news makes a lot of sense.

Jeffrey M. Berry is Skuse Professor of Political Science at Tufts University. With Sarah Sobieraj, he is the author of The Outrage Industry (Oxford University Press, 2014).