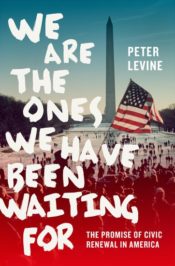 We Are the Ones We Have Been Waiting For: The Promise of Civic Renewal in America

Leaders and influential movements in countries such as the Philippines, Russia, Turkey, Hungary, Italy, France, Spain, Britain, Venezuela, and the United States are being called “populists.”

Sometimes that word (or its equivalent in other languages) is critical. It means that the leader has promised voters impossible or unjustifiable benefits in order to win election. No one calls themselves a “populist” in this sense; it’s an epithet.

Sometimes “populism” means advocacy for majoritarian or directly-democratic procedures, such as referenda or decentralization to local governments. That does not seem to be a major global trend at the beginning of the 21st century.

Jan-Werner Müller uses the word in a third, influential sense in his recent book, What is Populism? For him, “populists are antipluralist. They claim that they and they alone represent the people. All other political competitors are essentially illegitimate, and anyone who does not support them is not properly part of the people. [… ]The people are a moral, homogeneous entity whose will cannot err.” For instance, Donald Trump has said: “the only important thing is the unification of the people – because the other people don’t mean anything.”

I would add that this kind of populism is anti-intellectual, in the tradition that Richard Hofstadter depicted in Anti-Intellectualism in American Life (1963). Anti-intellectual populism rejects advanced, specialized, complicated thought, which is viewed as antithetical to common sense. According to Mark Fisher, Donald Trump is an explicit anti-intellectual:

He said in a series of interviews that he does not need to read extensively because he reaches the right decisions “with very little knowledge other than the knowledge I [already] had, plus the words ‘common sense,’ because I have a lot of common sense and I have a lot of business ability.” Trump said he is skeptical of experts because “they can’t see the forest for the trees.” … “ I want it short. There’s no reason to do hundreds of pages because I know exactly what it is.”

Trump seems to fit Müller’s definition precisely. However, “populism” can have a fourth and much more positive meaning. It can be explicitly and fundamentally pluralist. In her recent book Populism’s Power: Radical Grassroots Democracy in America, Laura Grattan writes:

Radical democratic actors, from grassroots revolutionaries, to insurgent farmers and laborers, to agitators for the New Deal, Civil Rights, and the New Left, have historically drawn on the language and practices of populism. In doing so, they have cultivated peoples’ rebellious aspirations not just to resist power, but to share in power, and to do so in pluralistic, egalitarian ways across social and geographic borders.

In the examples that Grattan explores, populists who celebrate “the people” (in contrast to corrupt elites) do not merely tolerate diversity or accommodate themselves to it. They are actively enthusiastic about pluralism, inventing “alternative” spaces and styles of engagement, inviting disparate actors to join in their festivals and parades, emphasizing freedom of speech and assembly as core values, and usually preferring to retain some distance from the state. In fact, one of their political liabilities is their tendency to splinter because they fear uniformity.

In this form of populism, diverse people create actual power that they use to change the world together.

In this conception, The People are not only heterogeneous; they are defined by being more pluralistic than the straight-laced elites, who promote one way of life as best for all. Furthermore, The People are not interested in surrendering their power to any leader. Their populist activity is all about building direct, grassroots, horizontal, participatory power. They are proud of their democratic innovations, whether those are letters of correspondence, Grange halls, sit-ins, salt marches, or flashmobs.

Eli Rosenberg, Jennifer Medina, and John Eligon began a recent New York Times article about anti-Trump protests: “They came in the thousands — the children of immigrants, transgender individuals, women and men of all different ages and races — to demonstrate against Donald J. Trump on Saturday in New York. Some held handwritten signs like, “Show the world what the popular vote looks like.” The throng chanted, ‘Not our president!’”

This form of populism is also often quite intellectual. It seeks to give everyone opportunities to study, reflect, and create knowledge. When I interviewed the great community organizer Ernesto Cortés, Jr. (Industrial Areas Foundation (IAF) co-chair and executive director of the West / Southwest IAF regional network), he told me this was his organization’s strategy:

Building talented, committed, enterprising relational organizers through recruitment, training, and mentoring. We develop their capacity to be reciprocal, relational organizers. Ask–what do Aristotle and Aquinas say? Explore the different traditions. Offer all kinds of seminars with a wide range of scholars from left, right, center. Develop their intellectual capacity, which is the capacity to be deliberative. Help them to understand labor, capitalism, the various faith traditions, strategic thinking. We offer what amount to postgraduate-level seminars in how to create effective leaders in an institutional context–not lone celebrity activists–people who build institutions that can then be networked together.

I emphasize populist pluralism because I fear we face three unsatisfactory alternatives:

We need a dose of populism that neither delivers power to a leader nor merely promises fair economic outcomes to citizens as beneficiaries. In this form of populism, diverse people create actual power that they use to change the world together.

Peter Levine is Lincoln Filene Professor of Citizenship and Public Affairs in the Jonathan Tisch College of Citizenship and Public Service at Tufts University and Director of The Center for Information and Research on Civic Learning and Engagement (CIRCLE). He is the author most recently of We Are the Ones We Have Been Waiting For, Reforming the Humanities: Literature and Ethics from Dante through Modern Times, and The Future of Democracy: Developing the Next Generation of American Citizens.