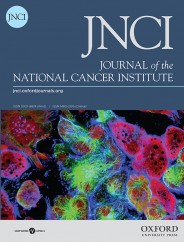 Journal of the National Cancer Institute

One of the most-cited cancer journals, the Journal of the National Cancer Institute features original research from around the world and is internationally acclaimed as the source for the most up-to-date news and information from the rapidly changing fields of cancer research and treatment.

Amy Griffin, associate head coach of women’s soccer at the University of Washington in Seattle, first began to wonder about artificial turf and cancer in 2009. “We had two goalies from the neighborhood, and they had grown up and gone to college,” Griffin said. “And then they both came down with lymphoma.

“And we were all sitting there chatting—both of them were bald—and they were like, ‘Why us?’ We were just brainstorming and someone said, ‘I wonder if it has something to do with the black dots.’”

The “black dots” are familiar to anyone who plays sports on artificial turf. Black dots are the crumb rubber used in today’s artificial turf fields (and on playgrounds). Those fields are designed to be more pliable than AstroTurf because they’re made from longer synthetic grass surrounded by infill made of ground rubber from used tires, usually mixed with sand.

Today’s fields typically contain the equivalent of at least 20,000 ground-up tires. Such fields were introduced in the 1990s to make playing fields safer (gone were the AstroTurf rug burns) and safely dispose of used car tires, which can pollute the water, air, and soil as they decompose—or catch fire—in landfills.

The UW campus is near Seattle Children’s Hospital. In three of the first four times Griffin visited, she encountered goalies with cancer.

“And there was a lot of online discussion about this. What are those little black dots? Well it’s ground-up tires. It’s tire trash, from the dump. And it contains carcinogens,” Griffin said.

“I’ve been at the University of Washington for 21 years,” Griffin said. “And for 15 years I saw nothing. I knew no one with lymphoma. But now, personally, I know six people who’ve had cancer.” By 2010 she had heard of 12 soccer players with cancer and decided to keep a list. She now has a list of 230 soccer players, nearly all goalkeepers, who have played on artificial turf and developed cancers. “Why is this?” she said. “I thought it might be like asbestos, where it took 35 years for people to see the danger.”

A 2014 study of nine synthetic turf fields in Italy indicated that evaporating materials at high temperatures may expose children in crucial growth stages to toxic chemicals. The release of polycyclic aromatic hydrocarbons (PAHs) occurs continuously, according to the report, and the “toxicity equivalent of the different compounds evaporating from the crumb was far from negligible.” The quantity of toxic substances synthetic turf releases, the report concluded, “does not make it safe for public health”.

In 2010, researchers from the Agency for Toxic Substances and Disease Registry in Atlanta evaluated the concentration of lead in synthetic turf by collecting samples of fields. They determined that the level of lead in turf fiber material and in field dust exceeded the limit for children’s consumer products and concluded that “synthetic turf can deteriorate to form dust containing lead at levels that may pose a risk to children”.

The most pertinent concern, echoed by many scientists and advocates, was that researchers didn’t know much about the safety of crumb rubber. In 2008 researchers from Robert Wood Johnson Medical School put it like this:

Neither systematic testing nor post-test evaluation has been performed on the composition and fate of either the turf or the filler. […] Is the crumb rubber contaminated with metals as it comes from ground up used tires that have been in contact with many roadways and dirt surfaces; what is the surface temperature of the artificial turf as the crumb rubber is black and will absorb more heat than a grass surface; how are the fields safely disposed of once they exceed their usable lifetime; and what happens to the rubber material that does not stay attached to the turf as it becomes mobilized and is released into the environment or becomes attached to the skin and clothing of the users? Numerous mothers have told us that this crumb rubber comes home with the child and is distributed around the house. Furthermore, there are now residential uses of turf with and without “in fill” marketed in many colors with unspecified coloring agents. Is the rubber and turf safe?

But the fact that crumb rubber contains carcinogens doesn’t necessarily mean that it’s dangerous to people or leads to cancer.

Archie Bleyer, MD, clinical research professor at the Knight Cancer Institute of the Oregon Health & Science University, spent ten years with other researchers investigating the causes of childhood cancers. “We spent tens of millions, maybe hundreds of millions, and we could find no external cause for cancer in children.”

Much of the debate about the danger of synthetic turf concerns the bioaccessibility of the contaminants in crumb rubber infill—whether the contaminant is likely to be absorbed into the body. A 2013 study in Risk Analysis indicated that PAHs in artificial turf were generally below the limit of detection. The study characterized the exposure as generally “de minimus”.

A 2013 review of evidence indicated that the total risk of absorption through oral exposure, skin absorption, or inhalation for athletes was insignificant, concluding that “elevated health risk from inhalation exposure could occur only for workers installing artificial turf in small and poorly ventilated facilitates with a long exposure history”.

“Lots of environmental factors are important to developing cancer later in life,” Bleyer said, “but childhood cancers? Cancer in adolescents is almost always due to spontaneous mutation.”

Researchers in California, Oregon, and Washington are looking into the relationship between synthetic turf and cancer. So far, according to Bleyer, a trend doesn’t appear to be evident. Indeed, peer-reviewed research over the years has not yet shown evidence of a connection between crumb rubber turf and any childhood cancers.

Griffin’s concern is that the way scientists have been testing the safety of artificial turf may not reflect the way some soccer players interact with the material. She has seen blood cancers mostly in soccer players who were goalkeepers. They dive into the turf, often breathing only inches away from it, and end up ingesting much more of the substance orally than the average player. That’s not the sort of interaction researchers tend to investigate.

Despite widespread adoption of the crumb rubber–filled synthetic turf, no epidemiological studies have examined populations with experience playing on such fields. Nor have researchers conducted animal testing on rubber fill, in which mammals are directly exposed to the substance for long periods and researchers examine the effects.

Andrew Watterson, PhD, professor of health and director of the Centre for Public Health and Population Health Research at Scotland’s University of Stirling, has found cancer-causing chemicals in crumb samples from artificial soccer fields. He argues that the problem is just that so little is known about such a potentially dangerous substance.

“The surprising thing to me is that the health issues were not checked out much earlier—bearing in mind how long such pitches have been around and how many millions of people, especially children, use the surfaces worldwide—and we still don’t know what, if any, health risks there are from widely recognized carcinogenic substances used in crumb rubber and what uptake rather than simply exposure there is,” Watterson said. “It would have been in both government and industry interests to have sorted this [out] a long time ago.”

Tania Bush Isaksen, PhD, MPH, lecturer in the department of environmental and occupational health sciences at UW’s School of Public Health, is investigating cancer rates among athletes across Washington State. What she’s working on won’t tell whether artificial turf causes cancer, but “it’ll [tell] us if these rates are higher than we should expect.”

The Environmental Protection Agency, the Consumer Product Safety Commission, and the Centers for Disease Control and Prevention also are studying the issue. However, some sports facilities aren’t waiting. At least 30 clubs in the Netherlands have stopped the public from using fields made with artificial turf because of fears that the rubber could be dangerous to health.

But that choice carries risk, too. As Bleyer put it, “I don’t want us to eliminate this stuff.” Artificial turf helps allow children to exercise year-round. “I think there is a very good chance that a lack of exercise over the course of their lives would cause far more cancer than crumb rubber ever could.”

And Griffin, despite her serious concern about artificial turf—and despite being arguably the major figure to voice that concern—agrees. “The biggest problem would be if kids stopped playing and exercising over fear of cancer,” she said. Her own kids play on synthetic turf. She has them shower right after practice and immediately put their clothes in the laundry.

“A lot of this is just basic hygiene,” Isaksen said. “Take off your cleats and your shin guards and your socks outside; those things just don’t go in the house. And then go take a shower.”

A version of this article originally appeared in the Journal of the Nation Cancer Institute.

Daniel Luzer is the author of "Artificial Turf and Cancer Risk", recently published in the Journal of the National Cancer Institute.