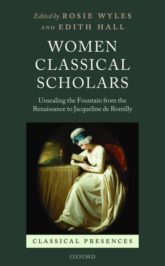 Women Classical Scholars: Unsealing the Fountain from the Renaissance to Jacqueline de Romilly

An unexpected figure lurks in the pages of Wonder Woman (no. 48) from 1951 — the 17th century French Classicist Anne Dacier. She’s there as part of the “Wonder Women of History” feature which promoted historical figures as positive role models for its readership. Her inspirational story tells of her success in overcoming gender prejudice to become a respected translator of Classical texts. Three hundred years after the publication of Dacier’s final translation, Homer’s Odyssey (1716), we too can learn from this figure. Looking back across her career, I can reveal ten tips for women today.

1. Be proactive
The keystone to Dacier’s success was the level of education she gained from her father, the scholar Tanneguy Le Fèvre. She was apparently proactive about securing this opportunity, secretly listening to her brother’s lessons and one day revealing how much she had learnt. This prompted her father to offer her the same education as her brothers.

2. Take risks
After Dacier’s father died unexpectedly, she made the bold decision to travel the 200-mile journey from Saumur to Paris and try to establish a career there. Later in her career, she took another risk when she translated the vulgar comedy of Aristophanes which was completely out of fashion. This daring undertaking is now recognized as a major part of her legacy to Classics.

3. Learn from mistakes
In two letters from 1681, Dacier begs her father’s friend, Daniel Huet, to intervene for her at Court so that she would get paid for the work which they had commissioned, as otherwise she was going to be left out of pocket. In fact, she never managed to resolve this issue, and in another letter, from later in that year, she notes that in future she would be more cautious! We all make mistakes, but it’s learning from them which can be our making.

4. Find your voice
Dacier was working in the shadow of her father who had been a famous scholar, but this didn’t stop her from carving her own path. In part she managed to do this by making her own voice heard — by respectfully disagreeing with some of his views in print. She was also ready to challenge other male scholars of her day, demonstrating that she was equal to them.

5. Make female solidarity work for you
Women were the cultural arbiters of Dacier’s day and could confirm the success of a publication, Dacier therefore wooed the female readership in her first French translation. In the preface, she says she hopes that her translation will delight women (and of course it’s no coincidence that one of her chosen authors to translate was Sappho the famous ancient Greek female poet).

6. Transgress smart
Achieving your goals despite society’s gender boundaries can mean playing the boundary — enforcers at their own game. Dacier offers a textbook example of this when she negotiates her transgression into the exclusively male domain of the King’s Library to consult a manuscript. She gets away with her invasion into male territory by describing her reluctance and timidity in going there. This reassuring assertion of modesty allays any alarm felt at the incursion.

7. Network
A swift perusal of Dacier’s book dedications shows a skilled operator at work. These are not sentimental choices of parents and partners, but rather key figures whose support Dacier needed. She ensures that she’s noticed by the right people through these dedications. They are the equivalent of modern networking.

8. Pick a supportive partner
One of the mistakes which Dacier learnt from was her first marriage (to a printer, Jean Lesnier, in the Loire region). The marriage broke down after the death of their first child. Her second marriage, however, was to last until her own death. Her second husband André Dacier had studied with her father and was also a scholar. He respected her intelligence, collaborating with her on some publications, and supported her career.

9. Work-life balance
It seems impossible, from the stack of publications which Dacier produced, to believe that she could have also managed to have a life outside her books, but that’s exactly what the evidence suggests. Her contemporaries write that she was a wonderful conversationalist and praise her ability to socialise, setting the books aside to talk about hairstyles. Meanwhile her devotion to her family life is vividly recorded through her heartfelt words of grief after the death of her daughter.

10. Attract trumpet blowers
Self-publicity is a treacherous enterprise (and perhaps even more so now than in Dacier’s day). The elegant solution to the trumpet-blowing dilemma is to find someone else to do it for you. Dacier’s friend, who also happened to be a champion of women, Gilles Ménage did that brilliantly for her in his History of Women Philosophers.

The 21st century can seem a world apart from the 17th century: we’ve made significant gender progress over the intervening centuries. Yet gender inequality continues to be an issue. Looking back to the success of Dacier, and other historical female figures, at overcoming barriers is not only uplifting, but can also prove surprisingly instructive. It seems that we need our “Wonder Women of History” as much in 2016 as they did in 1951.

Rosie Wyles is Lecturer of Classical History and Literature at the University of Kent. Her publications include her monograph Costume in Greek Tragedy (London, 2011) and co-edited OUP volumes: New Directions in Ancient Pantomime (2008, edited with Professor Edith Hall) and The Pronomos Vase and its Context (2010, edited with Professor Oliver Taplin). Her most recent volume is Women Classical Scholars: Unsealing the Fountain from the Renaissance to Jacqueline de Romilly (2016, co-edited with Professor Edith Hall). Her research interests include: Greek and Roman performance arts, costume, reception within antiquity and beyond it, and gender.