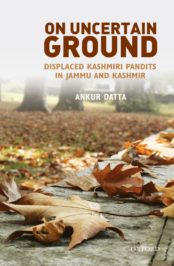 On Uncertain Ground: Displaced Kashmiri Pandits in Jammu and Kashmir

If there is a figure that has truly come to define the human condition over the last few years, it is the refugee. From the battlefields of Syria, to the water crossings from North Africa to Europe and the boats of Rohingyas escaping the Myanmarese state, to camps in Calais or Nauru, the refugee is not far from our sight. To claim the refugee as the figure of the 21st century is to forget that Hannah Arendt made a similar claim about the modern world, writing in the aftermath of the Second World War and decolonisation, and the flows of displaced people in Europe and Asia.

In popular and legal imaginations, the refugee is someone who has crossed an international border and had to flee the nation-state of their origin due to persecution and fear of threat to life. They become stateless as they are caught between their home lands and states, and other places they flee too. And as the news reports about Syrian refugees making their way desperately to Europe show, they are feared by receiving states and populations. To be a refugee is to be truly neither here nor there.

But does the refugee category capture the full experience of displacement? Since 1990 the valley of Kashmir has been marked by a conflict between an insurgency and a movement demanding the right of self-determination from the Indian state. Consequently life in Jammu and Kashmir has been marked by an extreme militarisation of the landscape, the violation of human rights, the loss of life, curfews, and strikes. However, amidst the different casualties of this conflict are the Hindu Minority of the Kashmir valley, better known as the Kashmiri Pandits. Between 1989 to 1991, an overwhelming majority of the community had fled to areas in southern Jammu and Kashmir and different Indian cities. The Pandit exodus remains controversial. Some argue that the Indian Government initiated the exodus to discredit the movement for Azaadi in Kashmir. Others insist that the Pandits were targeted as a Hindu minority and were supportive of the Indian state in Kashmir. The truth of the exodus is yet to be established.

Do the Pandits qualify as refugees? Many of them remain within India and even within their home state of Jammu and Kashmir. A prominent section of the population had been accommodated in camp colonies and townships, and have slowly rebuilt their lives over the years. While some return to visit Kashmir from time to time, barely have any Pandits returned to resettle in Kashmir.

But if we look at areas marked by conflict, past and ongoing, across the world, the phenomenon of Internal Displacement is far from uncommon. In conflicts such as the Sri Lankan Civil War, to South Sudan and Iraq, there have not only been flows of refugees but also large populations of people who have lost their homes, but remain within or close to conflict zones or within their own states. While the refugee is a legally recognised identity with rights and entitlements on paper, the Internally Displaced Person (IDP) is only a working definition. In some cases IDPs often have to look to the same state authorities whose policies and actions may have displaced them in the first place. Most IDPs also find themselves in the company of peoples displaced from their homes due to natural disasters, or large masses of migrants who travel to escape poverty. This contributes to the imagination of IDPs as an unclear mass of people, seemingly unrecognisable.

The Kashmiri Pandits especially face this problem. They are internally displaced and cannot claim refugee status. In turn the Indian state labels them as ‘migrants’, which is used to refer to all displaced persons in Indian administered Jammu and Kashmir. While the Pandits have been beneficiaries of a relief programme which provides limited financial and food aid, shelter in special camps and colonies for some, they remain uncomfortable with the label migrant. I was often told during my fieldwork in a migrant/Pandit camp in Jammu; ‘anyone is a migrant. You are a migrant!’ Hence the Pandits are acutely aware of a lack of recognition of their experience. The relief programme also locates them in a difficult position in relation to local communities. While there is sympathy for Pandits as a displaced people and  as beneficiaries of relief, they are also seen to be privileged by the Indian state at the expense of other socio-economically and politically marginalised people in the region.

The Pandits share many of the problems faced by refugees. They have lost their homes, lives, and livelihoods. They express nostalgia for the lives they left behind in Kashmir and worry for an uncertain future in Jammu and Kashmir, in India and elsewhere. They are also dependent on the support of the state which offers very few solutions of any final form of resettlement or rehabilitation. In the early days of their displacement, many locals helped the Pandits while others were resentful and fearful of the arrival of potential squatters in their territories. However, the Pandits are fellow citizens and subjects. Like other IDPs the Pandits face the struggle of seeking legal and political recognition of their condition. It is from the struggle for recognition that we should begin a discussion about what it means to be a refugee in one’s own country.

Ankur Datta teaches in the Department of Sociology, Faculty of Social Sciences, South Asian University, New Delhi. He is author of On Uncertain Ground: A Study of Displaced Kashmiri Pandits in Jammu and Kashmir.