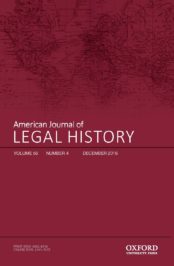 The new American Journal of Legal History aims to publish outstanding scholarship on all facets and periods of legal history. While retaining its focus on American legal history, it accommodates the enormous broadening of the intellectual horizon of the discipline over the past decade and is particularly interested in contributions of a comparative, international or transnational nature. Book reviews are a regular feature.

Nate Parker’s movie The Birth of a Nation, which opens in Europe this month, tells the semi-fictionalized story of Nat Turner, an enslaved man who led a short-lived rebellion in rural southeast Virginia in August 1831. The movie focuses on Turner’s life before the rebellion; demonstrating one man’s breaking point sparked by the witnessing of extraordinary brutality. In the movie version, Nat Turner was a baptist minister, hired out to plantation owners to preach sermons of obedience to the enslaved communities. The Birth of a Nation showcases the roots of Black revolutionary thought at a time when the Black Lives Matter movement is in full force. It also begs acknowledgement to the legacy of the rebellion as it relates to the eventual abolition of slavery. Taking the long view, was the rebellion successful? What questions does the film raise, and how can we use the film as a catalyst for honest reflection and progress?

The movie invites timeless questions such as why did most enslaved people obey their owners instead of rebelling? What legitimate options did slaves have given that they had no say in the laws holding them in brutal bondage? Was Turner a Freedom Fighter like those heroes of the American Revolution whom we venerate? What is the history and legacy of Black freedom fighting? Yet, we do not hear Turner say much about this. For the movie depicts the defeat of the Turner rebels and then—after some weeks in hiding—it has Turner surrendering and being executed. The movie leaves out what has come to be known as his Confessions and his trial. That is, Turner has an important legacy in the debate he sparked. That legacy of debates about the morality and expediency of slavery is not explored in the powerful movie.

Much of what we know about the rebellion and Nat Turner himself comes from the pamphlet called The Confessions of Nat Turner, which was published by a local lawyer, Thomas Gray. The Confessions purport to be a statement made by Turner to Gray, but for decades scholars have debated how much of it is Turner’s thoughts and how much Gray’s. The Confessions suggest that Turner was unrepentant and believed himself divinely inspired and justified. There are sections that sound unmistakably different from the main narrative, which leads many scholars to believe that Turner’s voice is indeed there—but edited—by Gray.

There is another, longer story of the rebellion’s aftermath, too. For the rebellion inspired Quakers to petition the Virginia legislature to end slavery. Some legislators from western Virginia, where slaves were relatively few, took up the cause. They looked back to enlightenment ideas of freedom that circulated in Virginia during the days of the American Revolution and urged the adoption of a gradual abolition scheme. But the ideas that property and slavery were twin pillars of civilization, that Virginians could not afford to give up slavery, and that slavery was a key ligament of society were more popular.

After the debates ended Thomas Dew, a young William and Mary professor, summarized the arguments in a pamphlet called Review of the Debates in the Virginia Legislature. Dew’s pamphlet covered well the pro-slavery case, from the near ubiquity of slavery in history, to the impracticality of deporting freed slaves, to the centrality of slavery to the southern, indeed American, economy. Turner, thus inspired one of the most important pro-slavery treatises ever written. And Dew silently responded to other African Americans as well. Where David Walker’s Appeal to the Coloured Citizens of the World proclaimed that “we Coloured People of these United States, are, the most wretched, degraded, and abject set of beings that over lived since the world began,” Dew responded, without deigning to mention Walker, “A merrier being does not exist on the face of the globe than the negro slave of the United States.” Others built out Dew’s ideas. For instance, Georgia lawyer Thomas Cobb wrote An Inquiry into the Law of Negro Slavery in 1858, which contained pro-slavery arguments drawn from history, economics, and ethnography. But subsequent authors worked within the arguments Dew first used. They say a lot about why southerners would not give up slavery without a fight and a big one.

Though only a few dozen slaves participated in the rebellion and it was largely over in two days, the rebellion marked a turning in proslavery thought and set the nation on the road towards Civil War—and the extinction of slavery through that war. Black revolutionary thought is a long established ideology throughout the African Diaspora, and Turner’s rebellion is without question one of the pillars of this tradition.

Kelley Fanto Deetz is the founding director of The Shared History Project, and the author of the forthcoming cover story entitled Nat Turner’s Bones for the January/February issue of National Geographic History magazine. She is directing the excavation of the Turner Rebels’ Burial Site and the repatriation of Nat Turner’s remains in conjunction with National Geographic and the Smithsonian.

Alfred Brophy is Judge John Parker Distinguished Professor of law at the University of North Carolina. He is co-editor the Amercian Journal of Legal History. His most recent book is University, Court, and Slave: Proslavery Thought in Southern Colleges and Courts and the Coming of Civil War (Oxford University Press, 2016).

The latest issue of American Journal of Legal History revisits the debate on the interpretation of the Second Amendment with a forum: an article by Douglas Walker, Jr. and commentary by Nathan R. Kozuskanich and William Merkel. Access these three papers for a limited time for free online. The journal published an article on STYRON's confessions, entitled, Thomas R. Gray and William Styron: Finally, A Critical Look at the 1831 Confessions of Nat Turner by Daniel S. Fabricant.