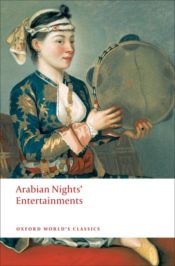 What do Jane Austen, William Makepeace Thackeray, Charles Dickens, Charlotte Brontë, Robert Louis Stevenson, Joseph Conrad, H.G. Wells, James Joyce, Salman Rushdie, and Hanan Al-Shaykh have in common? Give up? Other than all being great authors who write in English, they were all influenced by One Thousand and One Nights.

It’s difficult to overstate the significance of One Thousand and One Nights in our literary tradition, and yet this work of literature historically bore little resemblance to what we might recognize today as the Arabian Nights. In Arabic, the earliest fragments of the text (including the frame story involving Scheherazade, who tells a story each night to Schahriar to keep him from killing her) date to the ninth century, though the stories most likely circulated orally for centuries before that—it’s thought that the oldest stories originated in India and Iran. Later, in the tenth to twelfth centuries, the One Thousand and One Nights corpus grew to include stories originating in Baghdad, the cultural capital of the Arab world at the time, including the adventures of the caliph Haroun Alraschid and his vizier Giafar. (Spellings of characters’ names vary—in this article, I’m using the spelling that appears in the Oxford World’s Classics edition of Arabian Nights’ Entertainments, but you may recognize “Giafar” better as “Jafar,” as in Disney’s Aladdin.) Still more stories were added to the corpus in Cairo in the twelfth to fourteenth centuries; these stories often contain elements of ancient Egyptian folklore: tricksters, magic talismans, demons, and genies. Until the nineteenth century, there was never a single standard version of One Thousand and One Nights—aside from the definitive frame story, storytellers and compilers might choose to include or exclude stories associated with the collection to suit their own aims.

Although the first “authoritative” versions of One Thousand and One Nights in Arabic did not appear until the nineteenth century, the earliest French and English versions, which tacitly claimed to draw from a standardized source text, appeared a century earlier. In fact, rather than straightforwardly translating a single source text, Antoine Galland, the first translator of One Thousand and One Nights into French (as Mille et une nuit), drew on a variety of sources, including old manuscripts and the folk tales he heard from a traveling Maronite Christian from Aleppo, Hanna Diab. Some of the most popular stories in Galland’s Mille et une nuit—Ali Baba and the Forty Thieves and Aladdin and the Lamp among them—were probably not a part of the original One Thousand and One Nights at all. Critics tend to agree that, as one E.F. Bleiler put it, “translation [may be] too precise a word” for what Galland did to his Arabic sources.

Arabian Nights’ Entertainments was, in turn, a translation not of any Arabic source text but of Galland’s Mille et une nuit. Known as the “Grub Street” translation, there is no named translator of the work. Arabian Nights’ Entertainments proved very popular—it was adapted countless times for children, usually with a moralistic tone (e.g., Oriental Tales, Being Moral Selections from the Arabian Nights Entertainments calculated both to Amuse and Improve the Minds of Youth (1829)), and in spite of attracting scorn from some critics for being perceived as too “feminine,” the work was widely read and worked its way into the psyches of many great British writers, from Jane Austen to H.G. Wells.

The influence of Arabian Nights’ Entertainments has been far from all positive—the stories, which romanticize and exoticize a monolithic “East,” added fuel to the Orientalist fire that swept Britain in the eighteenth and nineteenth centuries, and we should be careful not to assume that details and the atmosphere of the stories in Arabian Nights’ Entertainments are factual rather than invented by Antoine Galland. (To combat the risk of making this assumption, I recommend reading Arabian Nights’ Entertainments in tandem with the excellent One Thousand and One Nights by Hanan al-Shaykh.) Though One Thousand and One Nights has mostly reached us as an Orientalist translation of a translation of a hodgepodge of stories, it is nonetheless important to recognize how much the modern British and American storytelling tradition owes to the art form as it developed in Baghdad and Cairo so many centuries ago.

Lucie Taylor is a publicity assistant at Oxford University Press in New York; she holds a B.A. in Arabic and French from Brasenose College, Oxford. Follow her on Twitter at @lmtaylor222.