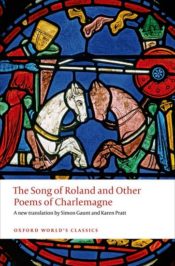 The Song of Roland

What constitutes a person’s identity: family, country, religion? How do we resolve conflict: military action, strategy, negotiation? What turns a good man into a traitor? How different are we really from our enemies? These are all burning questions today, but they were equally urgent in the late eleventh century, as we see in the most famous Old French epic, the Song of Roland. Composed at the time of the First Crusade for a French-speaking audience in post-conquest England and continental France, the Roland tells of a heroic defeat turned into victory. Its eponymous hero dies for his family’s reputation, for his overlord Charlemagne, ruler of “sweet France,” and for his Christian God. But are his actions motivated more by self-interest (his reputation as a great warrior) or by altruism (the interests of France and Christendom)? Not all members of the French army agree with Roland’s thirst for revenge against the Saracens, who have previously killed Christian messengers, and after seven years on campaign in Spain, many Frenchmen are ready to return home. Roland, disgusted with the views of the doves, mischievously nominates his own stepfather Ganelon to negotiate with the Saracen foe. As a result, Ganelon becomes one of the most infamous of literary traitors, finding himself later in Dante’s Hell. He nominates Roland to lead Charlemagne’s rearguard, thus enabling the Saracens to kill the twelve peers (Charles’s greatest barons), including the emperor’s nephew at the battle of Rencesvals in the Pyrenees. This, however, occurs only after Roland’s companion-in-arms, Oliver, has tried to persuade him to call for reinforcements before joining battle, a suggestion Roland rejects as cowardly. Nevertheless, despite opposition to Roland’s reckless ideology from his fellow Frenchmen, he eventually does blow his famous ivory horn, attempts to destroy his trusty sword Durendal so that it does not fall into enemy hands, and dies a poignant death as a hero (scenes immortalised in the stained glass windows of Chartres Cathedral, and imitated countless times in literature and film down to the present day).

The rest of this tragic narrative involves Charlemagne’s revenge for Roland’s death, aided by divine intervention. He defeats a massive army of Muslims, whose martial, aristocratic characteristics resemble in many ways those of the Christians, and who differ from them only in religion, fundamental to the epic’s ideology, but in fact described (and understood) only superficially, or in the case of Islam, erroneously. In the final scenes, Charlemagne punishes Ganelon in the most gruesome of ways.

However, despite the Roland’s strong crusading propaganda many issues are left open for debate, suggesting parallels with our own troubled world. Can holy war ever be justified, particularly when human desires and emotions, such as jealousy, envy, and greed inevitably intervene? How different are opposing religions, or indeed races, from each other, however entrenched the ideological differences? As the Roland remarks wistfully of the strapping, handsome Saracen emir: “What a great warrior, if only he were a Christian!” Troublingly, the lyricism of the poem’s celebration of military masculinity and its uncompromising patriotism are at times intensely moving, as are Roland’s distress at the sacrifice of his men and his own heroic self-sacrifice as he blows his iconic horn to recall Charlemagne, fatally rupturing his temples as he does so. The Roland is a perfect illustration of the power of epic poetry and rhetoric to sway opinion and stir emotion

Roland and Charlemagne are great heroes of French culture, yet the other two French epic poems we have translated present them in a surprising light. Both texts were composed after the Roland, probably in the twelfth century, but provide prequels to the battle of Rencesvals. In the Occitan (southern French) Daurel and Beton, Charlemagne betrays his sister for money, marrying her off to a treacherous and murderous baron who behaves with intense brutality. In the Journey of Charlemagne, he is prompted to travel abroad in order to disprove his wife’s suggestion that he is not the greatest ruler in the world. Thus women play a more significant role in the later works than the pagan queen in the Roland, who converts to Christianity, and Aude, who drops down dead at the news of her fiancé Roland’s death. Comedy, even parody, is the overriding tone in the Journey, especially when the French, after a drinking session, are overheard bragging outrageously about their sexual and martial prowess, and only divine intervention enables them to fulfil their boasts. What is more, Charlemagne proves to be superior to King Hugo the Strong of Constantinople only because he is taller, therefore wearing his crown higher! Thus, the medieval French were not averse to poking fun at their national hero and his acolytes, even questioning the propaganda coming out of St Denis that its holy relics had been fetched personally by Charlemagne from the Holy Land.

What these three medieval epics demonstrate is that medieval literature can be funny, dramatic, exciting, lyrical, self-questioning, and tragic. We may thus have more in common with medieval authors and audiences than we might think.