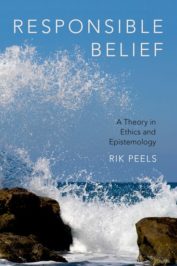 Responsible Belief: A Theory in Ethics and Epistemology

Some people think that voting for Donald Trump was a detestable thing to do, whereas others are convinced that we had an obligation to vote for him in order to get rid of the political elite. Of course, in explaining why they voted the way they did, people will appeal to their beliefs. Some of those will be factive: beliefs about such things as whether someone paid his taxes or whether someone gave full disclosure of certain emails. Other beliefs will be normative: beliefs about such things as whether America should pursue international political leadership or about whether it is permissible to use water-boarding techniques to extract information from prisoners.

However, the idea of responsibility for our beliefs faces two big challenges. First, how can we be responsible for our beliefs at all? I am responsible for whether I treat my neighbor kindly or rudely, because I can choose or decide to treat her kindly or rudely. But I do not choose or decide to hold a belief. Nobody ever wakes up in the morning and thinks: “Today, let me form this or that belief.” Beliefs are things that are not under the control of our will. How, then, are we responsible for them? This is a controversial issue in contemporary analytic philosophy. One way to think of it is this: we are responsible for our beliefs, because they are the consequences of things over which we do have control, such as whether we gather more evidence, whether we are humble and pay attention to our prejudices and biases, and whether we try to become more open-minded.

Second, assuming that the first challenge can be met and that we are indeed responsible for our beliefs, we still face a deep puzzle about responsibility. As I said, people normally act in accordance with their beliefs. And that, it seems, is the right thing to do. One should not act contrary to what one believes to be the facts or contrary to what one believes one ought to do. Philosophers have even come up with a name for situations in which one succumbs and acts against one’s better judgment. Ever since Aristotle, they call it akrasia. One is akratic, for instance, if one believes that eating an entire bag of chips is bad, but one still does it. We don’t want people to be akratic. Rather, they should act in accordance with their beliefs.

Now, here’s the problem. If we are to hold people responsible for their beliefs, then, given that belief is not under the control of the will, it must issue from an earlier culpable act: one neglected evidence, one failed to enter into conversation with certain people, one was not open-minded, or some such thing. But, presumably, at that earlier time, one believed it was alright to neglect that evidence, fail to enter into conversation, or not be open-minded on that occasion. Thus, how can we ever hold people responsible for their beliefs and the actions performed on the basis of those beliefs? We are unwilling to give up holding people accountable for their beliefs. But it seems we are equally unwilling to give up the principle that people should not act contrary to their beliefs.

I am not entirely sure how this challenge can be met. But here are at least a few things we ought to note that can help in solving the problem.

First, it seems that if people act on their beliefs and there was no way they could have changed those beliefs – for instance, because they have been thoroughly indoctrinated or they suffer from a psychosis – we cannot blame them for holding those beliefs and for the actions based on those beliefs. Maybe we should take protective measures and perhaps even incarcerate them, but they are not morally responsible for what they believe or what they do.

Second, intellectual virtues or, as philosopher Linda Zagzebski calls them, ‘virtues of the mind’, steadily grow over long periods of time: open-mindedness, curiosity, thoroughness. And so do intellectual vices, such as dogmatism, conformity, and sloppiness. They gradually arise out of choices we make on particular occasions, such as whether we listen to someone and try to understand what things would look like from their point of view. These intellectual virtues and vices heavily influence our beliefs and, consequently, our actions. Thus, the more evidence we have that someone has had enough opportunity to develop these virtues, the more we can hold them responsible for their beliefs.

Third, the flat-out principle that we should act on our beliefs might be too simplistic: it may need substantial qualification by taking into account serious doubts that one might have, whether or not one’s belief matches one’s emotions and desires, and whether or not there is substantial disagreement with others about the belief in question. This, as such, will not solve the problem, but such qualifications seem needed to do full justice to our intuitions about the plausibility of the akrasia principle.

The responsibility we bear for our beliefs is crucial for individual well-being and the flourishing of our societies. And yet, like so many things that are crucial in our lives, it is vexing and raises deep philosophical questions. We will need joint work by ethicists, epistemologists, psychologists, and sociologists to find satisfactory answers.

Rik Peels is Assistant Professor in Ethics and Epistemology at Vrije Universiteit Amsterdam, the Netherlands. He is the author of Responsible Belief: A Theory in Ethics and Epistemology (OUP, 2016), editor of Perspectives on Ignorance from Moral and Social Philosophy (Routledge, 2016), and co-editor of The Epistemic Dimensions of Ignorance (CUP, 2016). You can read more on his personal website www.rikpeels.nl.