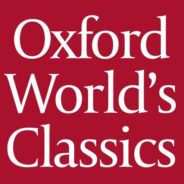 This week, Oxford University Press (OUP) and The Reader announced an exciting new partnership, working together to build a core classics library and to get great literature into the hands of people who need it most, with the Oxford World’s Classics series becoming The Reader’s “house brand” for use in their pioneering Shared Reading initiatives.

To celebrate the new partnership between Oxford University Press and The Reader, the team based at The Reader’s headquarters in Liverpool’s Calderstones Park is shouting about classics they’ve either just discovered for the first time or love from growing up, education, or from a Shared Reading group.

Meanwhile, the team at OUP have taken a look at their treasured classics, whether they’re re-reading or finding a classic they love for the first time.

“One definition of a classic is that it is a book you can read again—or even, that it is a book that is worth reading partly so that you can re-read it. ‎ A great book, as the critic Lionel Trilling once said, is not only something you read, but also something that reads you. Sometimes you can come to a book too early, and then the book tells you ‘not just yet’; but when you return to it later it may say ‘now’s the time’. I think many people feel that way about George Eliot’s Middlemarch—described by Virginia Woolf as ‘a novel for grown-ups’. ‎It is part of George Eliot’s conception that any person may be the moral centre of a story, and as you return to Middlemarch its different characters move in and out of the centre-ground — what felt like a story revolving around Dorothea becomes a story about Casaubon, or Bulstrode, or Mary Garth. It has something of the complex multiplicity of life itself—which must be a good definition of a classic.” – Jaqueline Norton, Senior Commissioning Editor for Literature at Oxford University Press

Jane Davis, The Reader’s Founder and Director, has chosen Cousin Phillis by Elizabeth Gaskell because of its tender, humane intelligence about the deep currents in family life.

“Over the summer I decided to fill in some ‘gaps’ in my reading—books that as an English literature graduate I was embarrassed to not have read—and decided to visit the OWC range in the very useful OUP library. After some searching I settled on the novels of Charlotte Brontë: I had never read any of her novels, and she has a relatively small body of work that I felt I could work my way through in a reasonable amount of time. A few months later, I’ve been pleasantly surprised by her lesser-known novels, The Professor and Shirley, and have been taken aback by the power of Jane Eyre and Villette. Now I have to decide who to read next!” – Ryan Kidd, Editorial Manager at Oxford University Press

Ailsa Horne, Specialist Development Manager at The Reader, has chosen Shakespeare’s The Winter’s Tale, as it was the first Shared Reading text she experienced.

“I’ve just enjoyed Ford Maddox Ford’s The Good Soldier. Its world is very different from mine, and I will never meet people like these. But like any book that grabs me, it has made me think about how people respond to dilemmas and challenges (and other people) that life serves up to them. In fact the distance from my world seem to sharpen my thinking, and that’s one of the beauties of reading a classic.” – Phil Henderson, Senior Marketing Manager at Oxford University Press

Alex Joynes, Project Worker at The Reader picked The Great Gatsby, by F. Scott Fitzgerald because it’s a stunning dismantling of the American Dream.

“Classics are something I re-read as a ritual. Jane Austen when I am ill (in bed with chocolates, obviously); The Turn of the Screw when under some kind of mental duress (it haunts me, and takes me away from whatever else is occupying my mind); Dubliners at Christmas (to replace different, lost rituals); previously unread classics in the summer; and new translations of old favourites in the spring. They measure out the year.” – Luciana O’Flaherty, Publisher at Oxford University Press

Andrew Parkinson, Membership Marketing Assistant at The Reader, has chosen Songs of Innocence and of Experience because he sees Blake as a visionary free of the ‘mind forged manacles’.

“At the moment, I’m rereading childhood classics with my eldest child, a daughter who is as precocious a reader as her mother once was. We tried Alice in Wonderland and The Wizard of Oz, at about two, far too soon for her which was frustrating for me. But now she’s 8, going on 9, and we started Oz again, together, and she has continued reading the Oz books on her own. We devoured The Secret Garden and The Little Princess together, cried through Black Beauty together, and were bored by Anne of Green Gables together (don’t holler, I loved them as a child and she probably will too when she’s a bit older).

I don’t know if my daughter and I will continue to read aloud together as she grows older, but if the time we have to read together is growing shorter the classics feel all the more relevant to the education of a modern child. I’m looking forward to Emma, Wuthering Heights, The Adventures of Tom Sawyer, and Treasure Island and all of the questions about history and time that they bring to the forefront of our conversations from day to day.” – Sarah Russo, Head of Publicity and Trade Marketing at Oxford University Press

Eamee Boden, Calderstones and People Assistant at The Reader, sees herself and Jane Eyre’s character as having lives that are parallel to each other.

“I love it when I have time to sit down with a classic book, because they remind me of what a rich history of Literature there is out there, and how fortunate we are to be able to immerse ourselves in it, or dip in and out, at will. Two longstanding favourites of mine are Madame Bovary and (quite different) the extraordinary Moby Dick.” – Ellie Collins, Senior Assistant Commissioning Editor for Literature at Oxford University Press

Chris Lynn, Volunteer Coordinator at The Reader, has chosen The Tempest because it’s his favourite play, and because it made Shakespeare’s works feel accessible to him.

“I read classic literature because it enriches my understanding of my favourite contemporary novels—if I wasn’t familiar with the mythology of 1001 Nights (and its Orientalist interpretations/“translations” e.g. Arabian Night’s Entertainments), I wouldn’t love Salman Rushdie’s Two Years, Eight Months and Twenty-Eight Nights nearly as much as I do. (Hint: the allusions begin with the title.) Reading Donna Tartt’s The Secret History without having read Homer and Plato just wouldn’t be as much fun, and how can you read The Sound and the Fury if you haven’t read Macbeth? Classic literature helps me make sense of my favourite books, and my favourite books help me make sense of the world.” – Lucie Taylor, Publicity Assistant at Oxford University Press USA

Communications Intern at The Reader Lauren Holland has picked the The Yellow Wall-Paper by Charlotte Perkins Gilman as an essential feminist text concerning women’s mental and physical health.

“In school I was a reluctant classics reader, and the seemingly never-ending discussion of Goethe’s Faust (though only Part One) didn’t particularly help that matter. Growing up in Germany and learning English, Shakespeare was a compelling, if largely confusing, teacher but he opened doors to other English writers, and soon I was willingly reading the usual suspects (Austen, the Brontës, and a little Dickens). Over the years and the course of an English literature degree I’ve branched out to other writers and shores, and Kafka’s stories and Ibsen’s plays have become favourites. While their stories were created in different centuries, they still feel relevant and help create an understanding of the past.” – Kim Behrens, Associate Marketing Manager at Oxford University Press

Martin Gallagher-Mitchell, The Reader’s Marketing and Communications Coordinator, has chosen The Woman In White by Wilkie Collins as the first novel he read with his Shared Reading group.

And, finally, a haiku from Niko Pfund, President of Oxford University Press USA:

Why classics, you ask?

GIFs created by The Reader. Used with permission.

This post was created by the OWC Marketing and Publicity team at Oxford University Press, in partnership with The Reader.