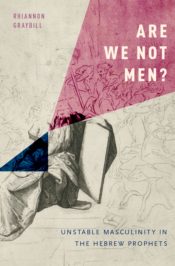 Are We Not Men?: Unstable Masculinity in the Hebrew Prophets

What does the Hebrew Bible have in common with horror movies? This question is not as strange as it might seem. It only takes a few minutes with the biblical texts to begin to realize that the Bible is filled with all kinds of horror. There are strange figures dripping blood (Isa. 63) and mysterious objects that kill upon touch (2 Sam. 6:7). Women are threatened, pursued, and even dismembered (Judges 19). The “scream queens” of horror are well matched by the screaming women of the Bible, especially in the prophetic literature, where women weep, cry, and howl in pain. (Even when it is men who are crying, their sound is compared to the sound of screaming women, as in Isa. 26:17-18). Even the repetitions of horror—the endless sequels, the killers returned from the (near) grave to haunt another day, the perky college students who just can’t stop going into the basement to find out what’s making that noise—have their parallels in the repetitions of the Hebrew Bible—the people who can’t stop sinning, the God who can’t stop finding new and appalling ways to punish them (in the book of Numbers: miserable food, disease, poisonous snakes, and strange fire, to name but a few). A better question might be not ‘What does the Bible have in common with horror movies?’ but ‘Why is the Bible so much like a horror movie?’.

I first became interested in reading the Bible in dialogue with horror because I was frustrated with the ways biblical scholarship repeated the same explanations about the prophetic literature, often without exploring how else we might understand the texts in all their bloody intensity. Intentionally framing the Bible as a work of horror destabilizes our sense of the familiar, while also opening new possibilities for reading—many of them inspired by new readings of horror films by critics, feminist and otherwise.

What does approaching the Bible like a horror film do for us as readers?

Classifying the Bible as horror lets us identify and address the parts of the text that are truly horrible, without trying to make excuses or sweep them under the interpretive rug. Instead, this approach shows that we might find continuity with other texts and scenes of horror. Isa. 63, the passage I have alluded to above, describes God’s appearance on the horizon, dripping with the blood of those he has trampled. This immediately brings to mind iconic scenes from The Shining and Carrie. In Hosea 2, God, terrorizing Israel (here represented as a woman), threatens to “hedge her up with thorns” and torture her, an image I have long associated with the barbed-wire death scene in Dario Argento’s Suspiria.

Horror also makes us think about gender, and what it means to have a female body. While both male and female bodies are subjected to outrageous violence and sadism, these bodies are not treated equally. In the Hebrew Bible, and in the prophets in particular, female bodies are disproportionately subjected to violence; rarely do they appear without being threatened. A common trope in horror films is that women who have sex are punished with violence, pain, or death; this is the case in Ezekiel 16 and 23 as well. On the other hand, death isn’t always a consequence of sex; God kills Ezekiel’s wife for no reason a few chapters later, in Ezek. 24:15-25. Lowbrow horror films, especially slasher films, are often criticized for their undermotivated violence; characters die “for no good reason.” The same is true, of course, of the Bible as well.

All this leads to another question, one often asked of horror films: What sort of person would want to watch that?—or, in the case of the Bible, What sort of person would read—or believe—that? If the Bible is truly as gruesome as a horror film, wouldn’t it be better simply to reject it? As a Bible scholar and (easily frightened) horror fan, I suggest the answer is no. The pleasure we take in watching Psycho or The Babadook—or I Know What You Did Last Summer or Child’s Play—is not simply sadism or misogyny. Instead, horror lets us complicate our experiences and play with categories. Ezekiel’s vision of the valley of the dry bones, in which the bones are brought back to life, takes on new (and more ominous) implications in light of zombie fictions as well as older films like Re-Animator. Horror also lets us play with gender. Here, one famous example in horror film is the “Final Girl,” the feisty, androgynous, female character who is the slasher film’s sole survivor (the term was coined by Carol Clover in Men, Women, and Chain Saws). The Final Girl helps us to understand a figure like Jael, the Kenite woman in Judges 4 and 5 who stabs the Canaanite general Sisera to death and lives to tell the tale. Like the Final Girls of horror films, Jael is self-directed, independent, vaguely masculinized – Sisera addresses her with a masculine grammatical form – and more than willing to stab a killer to death using a phallic weapon (in her case, a tent peg). Reading Judges 4 and 5 while watching Halloween or Scream draws out unexpected connections of all sorts.

Rhiannon Graybill is Assistant Professor of Religious Studies and Director of the Gender and Sexuality Studies Program at Rhodes College in Memphis, TN. She is the author of Are We Not Men? Unstable Masculinity in the Hebrew Prophets (OUP, 2016). She has written previously for the OUPblog on teaching the Hebrew Bible in the context of campus sexual violence.

The surprising similarities between Game of Thrones and the Hebrew Bible

10 books on magic, monsters, and myths to read for Halloween [reading list]