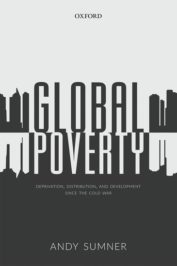 Amartya Sen’s famous study of famines found that people died not because of a lack of food availability in a country, but because some people lacked entitlements to food. Can the same now be applied to the causes of global poverty?

Certainly there have been big changes in the distribution of global poverty since the end of the Cold War. Back in the late 1980s over 90% of the world’s poor were to be found in countries classified as low income countries. Today three-quarters of the world’s poor – about a billion people – live in countries classified as middle income countries. Of course there are all sorts of questions about the classification of countries by average income per capita, and the location or ‘geography’ of contemporary poverty in middle income countries points towards that. It also points towards the potential divorce of much of foreign aid from global poverty as most donors seek to focus aid on the poorest countries, even though much of world poverty is no longer in the low or least developed countries. What the large increases in average income do point towards is that there has been substantial increases in domestic resources available to end poverty. In fact about 70% of global poverty could be ended via redistributive social policy potentially funded, for example, by the public funds currently spent on regressive fossil-fuel subsidies that largely benefit elites and the upper middle classes. Those classes are more likely to drive cars and thus use more fuel and use larger amounts of household electricity than lower income classes. If such regressive subsidies were redirected, it would cover the cost of the poverty gap via cash transfer programmes in many middle income countries.

In short, a ‘poverty paradox’ has emerged: Most developing countries have or will have in the foreseeable future the domestic resources to address absolute poverty at a national level, and yet poverty is likely to persist despite those available resources because of prevailing patterns of and trends in inequality which may weaken the poverty reducing power of economic growth.

What does it mean for theorizing or thinking about the causes of global poverty? Orthodox theoretical explanations of poverty have tended to imply that the poor are poor because they do not have what they need to be defined as not poor, for example; the ownership of, or access to, assets or the holding of certain values over others, rather than theorizing about the structural causes of poverty at a societal level. Put another way, studying poverty has become to some considerable extent about studying the poor at an individual or household level, but that is not the same as studying poverty and structural causes at a societal level. And the study of poverty is often in a vacuum rather than systematically connected to broader processes of economic development.

In short, studying the ‘poor’ is not the same as studying poverty. This distinction is important as the difference between individual (or household) analysis and social structure of society is a central contention in theories of poverty in addressing the question of why are some people poor? An individual might be able to get better educated and get a job, and possibly move out of poverty as some theories emphasise, but individuals cannot change the unemployment rate or education opportunities across a society nor the welfare regime for social policy or the ‘growth regime’, for economic policy, which are a product of, amongst other things, the forms of economic development pursued.

One could say that theories of absolute poverty fall into three types: (i) material, deprivational, and deficit theories (within which those outlined above fall); (ii) subjective, cultural, and behavioural theories (the poor are lazy or have the ‘wrong’ values in terms of consumption and procreation); and (iii) structural and distributional or relational theories of poverty (which are those theories where poverty is a structural aspect of society or the mode of late economic development perused). Each theory of poverty implies a different type state response or ‘public responsibility’ in terms of the social policy or the welfare regime, or more generally the governing of who benefits from economic development. For illustration, if poverty is caused by individual failure such as laziness as subjective, cultural and behavioural theories suggest then there is little role for the state in terms of an interventionist welfare regime. However, if poverty is structurally related to distribution of existing wealth, income, and opportunities, and the nature of contemporary labour markets then there is a substantial role for a state to redistribute with an interventionist welfare regime.

Much theorising on the causes of poverty have tended not to emphasize questions of national inequality, and tended not to present poverty as a structural outcome of specific patterns of economic development and distribution. This is, at least in part, due to a prevailing assumption that distribution is not a relevant factor in explanations of poverty. If it is no longer the case in many developing countries that everyone is poor, then structural theories have a new found relevance. This points towards poverty as a question of national political economy rather than resource scarcity and related in particular to welfare and growth regimes and to fiscal policy which is – of course – a political choice or contract that governments or political elites make with the rest of the population; and that if you care about ending global poverty, there is now a case for looking more closely at national redistribution for purely instrumental reasons: to end global poverty quicker than waiting for economic growth to do the job.

In the same way that Amartya Sen’s famous study of famines found that people died not because of a lack of food availability in a country but because some people lacked entitlements to that food, the shifts in global poverty since the Cold War now point towards the availability of national resources to end much of global poverty, but the lack of entitlement of the poor to those public funds.

How Asia got richer