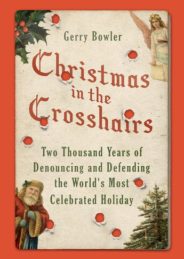 Christmas in the Crosshairs: Two Thousand Years of Denouncing and Defending the World's Most Celebrated Holiday

Christmas is the most widely celebrated festival in the world but in few countries is it valued as deeply as in Germany. The country has given the world a number of important elements of the season, including the Christmas tree, the Advent calendar and wreath, gingerbread cookies, and Bach’s Christmas Oratorio, “Es ist ein Ros` entsprungen,” or “Vom Himmel Hoch.” Christmas became inextricably linked to feelings of national identity, so it is no surprise that the holiday became part of Germany’s ideological wars in the turbulent first half of the 20th century.

For the country’s large Social Democratic Party, Christmas was a time to point out bourgeois hypocrisy, contrasting pious sentiments of the middle class with the reality of working-class poverty. For the Communist Party of Germany, Christmas was the season to attack religion and capitalism. Party newspapers called Christmas a fantasy that should be abolished, while party militia took to the streets to tear down community Christmas trees, bully church-goers or throw tear gas into department stores. This left Adolf Hitler’s National Socialists to pose as the defenders of this sacred German season—their brown-shirted goon squads battling it out in public December brawls with Communist Red Front fighters. Nazis also used Christmas to promote their anti-Semitic policies, blaming Jewish businesses for rapacious practices, vandalizing these shops, and urging consumer boycotts.

In 1933 when Hitler achieved power, Nazis at first simply tried to co-opt Christmas; party officials sponsored seasonal celebrations and appeared alongside Mary and Joseph in re-enactments of the Nativity, singing familiar carols along with their marching song, the “Horst Wessel Lied.” To further identify National Socialism with Christmas in the public mind, the new government undertook a vast program of winter welfare every December. Thousands of Nazi youth members and party volunteers collected money in Winterhilfwerke campaigns to be distributed to those families hardest hit by the Great Depression. But, at its heart, Nazism was incompatible with the traditional German approach to Christmas; like the Jacobins of the French Revolution and the Bolsheviks of the Russian Revolution, National Socialists wanted to reshape the calendar and the annual cycle of celebrations. There would be new holidays such as Hitler’s birthday, new rites of passage for youth and families, and an attempt to alter Christmas, by replacing its Christian core with secular and neopagan elements. The peaceful sentiments of Christmas had no place in a nation of racial warriors; thus the Berlin banners that proclaimed “Down with a Christ who allows himself to be crucified! The German God cannot be a suffering God! He is a God of power and strength!”

With the Nazi takeover of the school system and the national Protestant church, new hymns and carol replaced familiar favourites. Hebrew terms such as “Hosanna” or “Hallelujah” were edited out. The first verse of “Stille Nacht” was now a song of praise to Hitler:

All is calm, all is bright.

Only the Chancellor stays on guard

Germany’s future to watch and to ward,

There were those in the black-shirted S.S. elite who were genuine pagans, believers in the power of the old Teutonic gods and ancient symbols and relics. From these men came efforts to move celebrations from 25 December to the date of the winter solstice, to replace St Nicholas as the seasonal gift-bringer with Wotan, and to decorate the Christmas tree with pagan runes, swastikas or sun-wheels. On the winter solstice, S.S. men could be seen mountain tops lighting fires and performing “manly dances” with torches while in town the community were to gather around a massive bonfire from which children would ignite their candles to “bring home the light” to place on their own Yule tree.

With the beginning of the Second World War it became even more important for the Nazi state to control Christmas sentiment. To maintain morale during the holiday season Reichsmarschall Herman Göring supplied shops with plenty of extra food and consumer goods looted from occupied countries. Since the German people had too much emotional investment in the holiday for it to be directly attacked—however much National Socialists disliked its emphasis on peace and forgiveness—the Christian content was to be watered down in public celebrations and national publications. In the Advent calendar sent out by the Nazi party to families to help with its holiday celebrations the emphasis was on the solstice, decorating with pagan symbols and celebrating military successes.

However, as the war dragged on and Germany began to suffer defeats on the battlefield, government agents noted how the population continued to flock to church and how religion was sought for its comfort in the face of mounting casualties. The Nazi attitude to Christmas now turned macabre. For the 1944 edition of the official Advent calendar, the page for Christmas Eve was given over to a chilling “Poem of the Dead Soldiers” wherein readers were told “Einmal im Jahr, in der heiligen Nacht, verlassen die toten Soldaten die Wacht”: yearly on this date the ghosts of fallen soldiers rise to visit their homes and silently bless the living for whom they died. Within a few months the Nazi regime and its pagan Christmas were dead in the rubble.

Gerry Bowler is a Canadian historian specializing in the intersection of religion and popular culture. His Ph.D. is from King's College, London and he is the author of Europe in the Sixteenth Century, The World Encyclopedia of Christmas, and Santa Claus: A Biography.