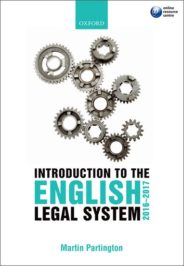 Introduction to the English Legal System 2016-2017

Legal knowledge doesn’t just come from textbooks and lectures. Last year, we asked Martin Partington, author of Introduction to the English Legal System, for his top ten film recommendations for law students and aspiring lawyers. This year he turns his attention to inspiring books that will get you thinking about our legal system, our society, and the role of lawyers – what would you add to his list?

The Rule of Law by Tom Bingham

I start, not with a work of fiction, but this book by a former Lord Chief Justice and President of the Supreme Court of the United Kingdom which is, quite simply, THE must-read book in the list. The ‘rule of law’ is a concept often mentioned in public debate but with little analysis of what the phrase actually means. Here, the late Lord Bingham sets out clearly and accessibly what the rule of law is, and why all lawyers need to be aware of its importance. It is about the proper limits of power and who should have responsibility for setting boundaries to the use of power. As an introduction to this fundamental constitutional principle on which the UK legal system is founded, it is without equal.

The Trial by Franz Kafka

The Trial tells the story of Josef K, who is arrested and prosecuted by a remote, inaccessible authority, with the nature of his crime revealed neither to him nor indeed to the reader. All law students should read this work as it forces the reader to consider what can happen if accepted norms of behaviour by public authorities are not adhered to – indeed what can happen if the rule of law is ignored. Its themes are relevant not just in the context of criminal justice but also administrative justice.

This is the tale of, among other things, the long-running case of Jarndyce v Jarndyce. Charles Dickens was critical of many aspects of the legal system as it operated in 19th century England. In Bleak House there are two particular targets in his sights. First the extent to which proceedings could be drawn out by endless procedural steps that failed to move the case forward – an issue that has only relatively recently been improved following Lord Woolf’s reforms of the civil justice system. Second, and related to the first, is that a claimant in an action may ultimately succeed in his action, but because of the delay and expense of the lawyers involved, there is ultimately no money left to satisfy an award of the court. This is an essential point that to this day needs to be borne in mind whenever civil litigation is contemplated.

This is a brilliant short story/novella which raises profound questions about the relationship between law and justice. Billy Budd tells the story of a sailor who, after a false accusation of conspiracy to mutiny, fatally injures one of his ship mates. While his remaining ship mates believe in Billy’s moral innocence, he must still face a court-martial and bear the consequences of his actions. Many works of literature explore this tension between law and justice – consider contemporary issues such as mercy killing. In what circumstances can killing be excused?

Order and Dispute by Simon Roberts

I was a colleague of the late Professor Roberts at the London School of Economics. He published the first edition of this wonderfully readable book on legal anthropology in 1979; a sec

ond edition appeared in 2013. In Order and Dispute Roberts makes the argument that there has been a tendency in the West to assume that only courts can be the true resolvers of disputes. He argues that, by looking at the ways in which other societies keep order and solve disputes, valuable light can be thrown on contemporary debates about order and dispute resolution in our own society. These issues remain at the centre of discussions about reform not only of the family, but also the civil and administrative justice systems in England and Wales.

Years ago, when I did some teaching at the University of Kent, Njal’s Saga was one of the books recommended to first year students. Written in the thirteenth century, it tells the story of a fifty-year blood feud that, despite its distance from us in time and place, is driven by passions familiar to us all. It explores perennial human problems – from failed marriages to divided loyalties, from the law’s inability to curb human passions to the terrible consequences when decent men and women are swept up in a tide of violence beyond their control.

In particular it explores the extent to which disputes can be settled by agreement, and examines the terrible things that happen when revenge becomes an overwhelming social force. Although a tale from another time, it is not hard to think of modern contexts in which revenge rather than the rule of law is dominant, and should encourage you to reflect on the dangerous consequences of a society in which a revenge culture becomes embedded. You may think this choice is a bit off the wall; but a great topic for an interview?

Arthur and George by Julian Barnes

This is a very enjoyable novel about a real life case that arose at the beginning of the 20th century. George Edalji was a Parsi English solicitor and son of a vicar in a South Staffordshire village. He served three years’ hard labour after being convicted on a charge of injuring a pony. His case came to the attention of Arthur Conan Doyle – author of Sherlock Holmes. He arranged for investigations to be made which demonstrated that George could not have committed the crimes for which he was convicted.

At the time, the legal system offered only extremely limited opportunities for appealing against unsafe criminal convictions. Indeed, the events surrounding the case were a key element in a campaign which eventually led to the creation of the Court of Criminal Appeal in 1907.

Since that time, of course, there have been further changes, in particular the creation of the Criminal Cases Review Commission in 1997.  The story reminds the reader how difficult it can be to get the balance right between ensuring that the public can be confident in the integrity of the criminal justice system confidence and at the same time being sufficiently flexible to ensure that miscarriages of justice do not occur, and that where they do, remedial action is taken.

This is perhaps the most frightening book I have ever read. The horrors of Room 101 disturbed me for weeks. I include it in this list because it shows the terrible consequences for societies that wholly reject the fundamental moral bases of truth and fairness. It is a work that has become more relevant as technologies have developed to enable organs of the state to monitor the activity of its citizens. Just consider current debates on privacy, and the powers of the police and other state agencies to ‘eavesdrop’ on the lives of citizens and to manipulate the truth.

There are big questions posed by the novel which all prospective lawyers should consider, so that they can ask themselves: what are the limits beyond which the state should not pass to maintain personal freedom? What should lawyers do when they fear that the state is proposing to go beyond what is acceptable and to do things which could undermine individual freedom? Can the rule of law set those boundaries? How can abuse of power be kept in check?

Less well known, and shorter, than War and Peace, Resurrection is nonetheless an excellent novel that raises profound questions about the justice of man-made laws. The story is about a nobleman, who seeks redemption for a sin committed years earlier. Following a brief affair with a maid, Maslova, she was fired and ended up in prostitution. Framed for murder, she is convicted of the crime and sent to Siberia. Nekhlyudov, the nobleman, goes to visit her in prison, meets other prisoners, hears their stories, and slowly comes to realize that all around his charmed and golden aristocratic world, yet invisible to it, is a much larger world of oppression, misery and barbarism. It illustrates the dire consequences of a criminal justice system that lacks fairness and humanity.

Justice: what’s the right thing to do? by Michael J Sandel

For my final choice, I leave the world of fiction again and propose this thoughtful and engaging book by Harvard Professor Michael Sandel. This work, published in 2009, was written to accompany a course Sandel has taught at Harvard for more than 30 years. He introduces the reader to the views of different philosophers about how they perceive the concept of justice, as well as introducing his own views on the meaning of Justice. You can see his lectures and also see him introducing the book in a TED talk: a great introduction to some of the key questions which underpin the study of law.

Martin Partington is Emeritus Professor of Law at Bristol University. For five years he was Law Commissioner, and was retained by the Law Commission as a special consultant until 2008. He was appointed CBE in 2002, elected a Bencher of Middle Temple in 2006, and made an honorary Queens Counsel in 2008. Martin is the author of Introduction to the English Legal System, and blogs at Spotlight on the Justice System.