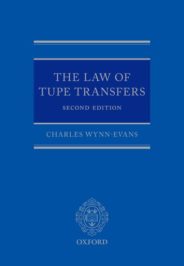 The Law of TUPE Transfers

The Leave vote in the EU referendum presents several potential challenges for employers which are of far more immediate and practical importance than speculation about the future direction of employment law in a post-EU environment. An issue over which a considerable amount of ink has been spilled, both before and after the referendum. These challenges include how employers should best seek to manage employee uncertainty and anxiety about the possible impact of the Leave vote on their business; how economic uncertainty will affect recruitment policy, perhaps pushing employers towards more temporary and agency and less permanent recruitment; the impact on employers’ ability to attract and retain skilled staff from overseas of potential changes to immigration laws as part of Brexit; how to reduce the risks of increased disputes in the workplace based on differing views of the merits of Brexit; and ensuring that any relocations or restructurings that the changed climate necessitates are handled so as to minimise exposure to claims. As the UK proceeds with the process of extracting itself from the EU, the impact on free movement and immigration laws will also be crucial for many employers.

Even though the UK already has one of the less heavily regulated labour markets in the EU, Brexit may nonetheless have important longer term implications for domestic employment law. Many commentators have raised their concerns that Brexit will lead to a further diminution of employment rights in the UK and identified various areas as being at risk of repeal or relaxation because they are required by EU law – and so might not need to be continued post-Brexit – and are seen in some quarters as imposing undue burdens on business. These include the incorporation into UK law of the Agency Workers’ Directive which has been unpopular with some employers by virtue, amongst other things, of the right to equal remuneration with comparable permanent employees after 12 weeks; the collective information and consultation regime applying to redundancies affecting 20 or more staff in a 90 day period; and certain provisions of the Working Time Directive such as the 48 hour limit on the working week, the obligation to include the equivalent of commissions in holiday pay, and the ability to treat holiday absence as sickness rather than holiday absence if an individual is ill while on vacation.

Another target for reform could be the Transfer of Undertakings (Protection of Employment) Regulations 2006 (“TUPE”). Outright repeal of TUPE might be attractive to those wishing to increase employers’ flexibility but it would potentially cause immense dislocation to existing outsourcing and similar arrangements – which have proceeded on the assumption that TUPE would apply on their termination – and given that TUPE assists business continuity by effecting the automatic transfer of employees. Alternatively, a perhaps more realistic scenario would be reform further to limit the application of TUPE in the insolvency context, and more generally to allow greater scope for post-transfer changes to and harmonisation of the terms of employment of the transferring employees than the restrictive European case law currently permits.

Prognostications about the future of the UK employment law regime can only deal in possibilities rather than specifics. The extent to which UK employment law might further be deregulated following Brexit will depend not just on the nature of the UK’s exit from the EU – and whether an ongoing relationship with the EU necessitates the retention of EU-derived legislation. For example, membership of the EEA would necessitate retention of transfer of undertakings legislation. The political appetite for further reform may also be difficult to forecast.

A bonfire of employment regulation post-Brexit is arguably far from inevitable, even though this view will be seen as naïve in some quarters. For example, in an article published after the referendum but before he became Secretary of State for Brexit, David Davis MP suggested that post-Brexit regulatory reform would not need to extend to employment law on the basis that “[a]ll the empirical studies show that it is not employment regulation that stultifies economic growth, but all the other market-related regulations, many of them wholly unnecessary” and that “Britain has a relatively flexible workforce, and so long as the employment law environment stays reasonably stable it should not be a problem for business.” He was not attracted to cutting the employment rights of “the great British industrial working classes [who] voted overwhelmingly for Brexit.” Theresa May’s more recent indications that legislation should be introduced to require worker representation on boards and binding shareholder votes on pay suggest to at least some extent a more interventionist than deregulatory mindset in relation to the labour market. A more cynical view might suggest that the Coalition Government’s various reforms to employment law – increasing the service required to claim unfair dismissal from one to two years, limiting unfair dismissal compensation to one year’s pay even if less than the statutory cap, and perhaps most significantly, the introduction of fees into the Employment Tribunal system – have already reduced employees’ rights – and their ability to enforce them – so significantly that further reform to reduce burdens on business is unnecessary.

However, in contrast, concern has been expressed in some quarters that views previously expressed about employment law by some of those now involved in high level policy formation could herald material diminutions to employment law and minimum wage protections. More dramatic changes that might be floated could be the introduction of a cap on the currently unlimited compensation which can be claimed for unlawful discrimination or indeed the revival of the proposal made in 2012 in the controversial Beecroft report that the domestic unfair dismissal regime should be abolished and replaced by a system of “no fault” termination entitling individuals to only to specific and relatively modest severance payments.

What is for sure is that the position is far from clear and that specific reform is not imminent, if only because, until the UK’s post-EU position is determined, the extent to which current regulations derived from EU law can be amended or repealed will remain unclear. Depending on their specific sector and the economic climate more generally, employers and employees may well have more immediate concerns in the short term than wondering about how the employment law landscape might change down the line.

Charles Wynn-Evans is a partner in the London office of Dechert LLP. He is the author of The Law of TUPE Transfers (OUP, second edition forthcoming in October 2016).