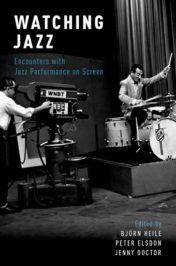 Recent months have seen the release of two movies about great jazz trumpeters from the 1950s and 60s: Miles Ahead (Don Cheadle, 2015) focusing on Miles Davis, and Born to Be Blue (Robert Budreau, 2015) focusing on Chet Baker (although Miles plays an important role in the latter too: his second cinematic revival in one year). The similarities don’t end there: both films are semi-fictional, homing in on a moment of crisis in their respective protagonists’ real lives and spinning a mostly fictional story around it. Likewise, both rely structurally on extensive flashbacks to tell their story. Both invented or enlarged a female character in a nod to a conventional monogamous redemptive love narrative. Both are slumming it in their graphic depiction of the destruction and misery wrought by drugs and the attendant crime. But perhaps the most significant parallel between the two films is the moment of crisis itself, showing their stars’ inability to produce anything more than squeals and grunts from their trumpets – in Davis’s case due largely to drug and alcohol abuse, in Baker’s to the loss of his front teeth in a drug-related mugging.

Miles Ahead and Born to Be Blue were preceded by Whiplash (Damien Chazelle, 2014), which likewise centres on jazz, although its narrative and setting are different. Casual cinema-goers may be forgiven for not being aware of the tradition these films respond to: the jazz film, a genre that is almost as old as film itself. Jazz and film were born at roughly the same time, both are the products of the modern age and quickly established themselves as the first quintessentially American art forms. No wonder, then, that they shared more than a passing fling, particularly during both their hey-day during the 1920 to 40s. Nevertheless, it could be argued that the jazz film comes into its own only once the music was overtaken by rock ‘n’ roll in terms of popular appeal and commercial success. The classics of the genre tend to feature tortured male geniuses, struggling with popular rejection or a creative crisis and alcohol or drug addiction while perfecting their craft. This type of narrative could not have much appeal as long as jazz had genuine mass appeal: by way of comparison, it is difficult to imagine teen idols from Elvis Presley to Justin Bieber in similar roles. Young Man with a Horn (Michael Curtiz, 1950), based loosely on trumpeter Bix Beiderbecke, created the mould, and many of the tropes present in Miles Ahead and Born to Be Blue more than sixty years later can be found here: the creative crisis, the battle with alcoholism, the woman whose love redeems the hero, the triumphant happy ending in which all the struggles are overcome (which the more recent films slightly undercut without eschewing it altogether). Like Young Man with a Horn, most jazz films are biopics in the widest sense, although many are based on fictional, not real-life musicians.

So why, when we’ve been waiting for so long – Woody Allen’s Sweet and Lowdown (1999) was the most recent notable example – do three jazz films come along at once, when the music itself leads but a niche existence? This may indeed come as a surprise, particularly since, although there is no shortage of fine examples, not a single representative of the genre has really set the world alight. The reason for that may lie in the fact that, for all its attractions, jazz is remarkably resistant to being captured visually: it is a child of the gramophone and, somewhat paradoxically, prioritises live performance over recording, as epitomised in its most distinctive feature: improvisation. Thus, while it promises to reveal its secrets, the essence of the music always eludes the cinematographer’s grasp. Or rather, jazz’s potential is only revealed in films that aren’t about jazz at all: for instance, in no other film does Miles Davis’s music come to life like in Louis Malle’s Ascenseur pour l’échafaud (1958), where it accompanies Jeanne Moreau’s nocturnal wanderings through Paris (supposedly improvised by Miles to the images). Compared to this seemingly effortless lyricism, seeing a fictional Miles play his actual music, as in Miles Ahead, must always appear prosaic, even if it’s done with the conviction that Cheadle brings to his role.

It would appear as if it is the very marginality of jazz in today’s culture that makes it interesting for filmmakers again. Throughout its more than a hundred years of history, jazz has constantly renewed itself, from communal music-making, through commercial success to artistic and avant-garde status. Not coincidentally, it entered conservatoires, universities and museums as a respected art form only when it no longer rivalled rock ‘n’ roll and its successors in terms of sales, and its celebration in documentaries in film and television followed suit. It is its afterlife, a nostalgic memory, that is presented in film. Herein lies the single most significant difference between Miles Ahead and Born to Be Blue on one side and their swing era precursors on the other: while the latter featured a then current music, the former are firmly set in the past. To be fair, the final scene in Miles Ahead is set in the present and features many contemporary, including young, musicians, yet this does not seriously affect the elegiac, nostalgic tone of the film. Indeed, it is revealing that both movies rely so much on flashbacks, particularly in performance scenes: it is as if the music is doubly removed from the present; even in the past, it existed already only as a memory. Jazz movies, like the music itself, will be with us for a while yet, but let’s not deceive ourselves that this proves jazz’s vitality.

Björn Heile is Reader in Music since 1900 and Head of Music at the University of Glasgow. He is co-editor of Watching Jazz: Encounters with Jazz Performance on Screen, author of The Music of Mauricio Kagel (2006) and editor of The Modernist Legacy: Essays on New Music (2009).