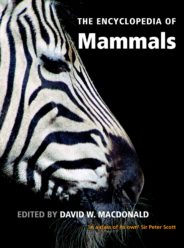 Written by an international team of experts and edited by renowned zoologist Professor David Macdonald, covers the behaviour, diet, distribution, and evolution of every known living mammal in the world in clear, accessible language, and is superbly illustrated throughout with photographs and original artwork. The most up-to-date edition is available on Oxford Reference, an online resource that brings together 2 million digitized entries across Oxford’s Dictionaries, Companions, and Encyclopedias, spanning 25 different subject areas. Discover more about Oxford Reference's experts and titles in Science and Technology.

Mammals are defined as warm-blooded vertebrates that are distinguished by the possession of hair or fur, of which the females secrete milk for the nourishment of their young, and typically birth live young (except five known species, including the duck-billed platypus). Small mammals evolved from reptiles about 200 million years ago and have diversified rapidly after the extinction of dinosaurs, but they’ve been roaming the planet for an incredibly short amount of time compared to the other classes of animals.

Different orders of mammals have survived for hundreds of thousands of years by adapting to the environment. This process of evolution has honed and sharpened certain characteristics within families, such as fur to keep warm, a circulatory system that allows for the regulation of body temperature, and the possession of a neocortex (the region of the brain that controls sight and hearing).

The neocortex in humans involves higher functions, such as sensory perception, adding to the idea that humans are the most intelligent mammal on the planet. Human evolution started several million years ago, when the apes began to walk upright. But it is only in the last 30,000 years our species (Homo sapiens) has inhabited the world. Did we outsmart our mammalian cohabitants, or did we pick up any of their characteristics in order to survive? Can these be traced back in our personalities today?

Can we match up your personality traits to those of our mammalian friends? Find out which mammal you most closely resemble!

Looking for more information about each of the mammals featured in this quiz? Read these articles from The Encyclopedia of Mammals: bull elephants, meerkat and other mongooses, dolphins, cougars and small cats, and sloths.

Animal of the month: an interactive experience with the eastern cottontail rabbit