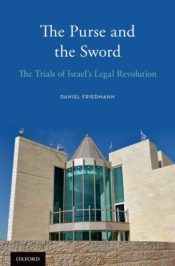 The Purse and the Sword

In this blog post Daniel Friedmann, author of The Purse and the Sword, examines whether Judaism can be classified as a nationality, as well as a religion and culture.

Is Judaism a religion and a culture or is it also a nationality? To this question the Zionist movement, which led to the establishment of the State of Israel, gave a clear positive answer. This approach has been adopted by Israel.

The Israeli Declaration of Independence of 1948 states that the “Land of Israel, was the birthplace of the Jewish people… Here they first attained to statehood… and gave to the world the eternal Book of Books.” The declaration further provides that it is “the natural right of the Jewish people” to have their own sovereign State, which “would open the gates of the homeland wide to every Jew.”

The promise was made good in the Law of Return enacted in 1950, which provides that: “Every Jew has the right to come to this country as an oleh [immigrant].” This legislation turned the question of who is a Jew into a legal one and led to extensive litigation.

“Every Jew has the right to come to this country as an oleh [immigrant].”

One of the most important cases was that of Benjamin Shalit, decided in 1970. Shalit, an IDF officer, married a non-Jewish woman. Under the halakhic orthodox rule their children could not be listed as of Jewish religion, given that their mother was not Jewish, but Shalit demanded that they be registered as being of Jewish nationality. The Interior Ministry maintained that the two went hand in hand; a person who was not of Jewish religion could not be of Jewish nationality.

The registration had no practical legal significance, but it was at the center of a profound ideological controversy. The Supreme Court, by a five-to-four decision, allowed Shalit’s petition and ordered the ministry to list the Shalit children as being of Jewish nationality.

The decision, which was strongly opposed by the National Religious Party, set off a public and political storm. Finally, a compromise was reached, and the law of Return and the Population Registry Law were amended in line with the orthodox halakhic standard that a Jew was “a person who was born of a Jewish mother or has converted to Judaism and who is not a member of an­other religion”.

Nonreligious Jews received compensation for the adoption of the halakhic rule in the form of another provision according to which the rights of a Jew to immigrate to Israel and to acquire Israeli citizenship “are also vested in a child and a grandchild of a Jew, the spouse of a child of a Jew and the spouse of a grandchild of a Jew, except for a person who has been a Jew and has voluntarily changed his religion.” It was this provision that made possible, two decades later, the mass immigration of close to a million immigrants from the Soviet Union, many of whom were not Jewish by Orthodox standards but who nevertheless view themselves as Jews and Israelis.

The legislative amendment also recognized the possibility, which was never disputed, that a non-Jew can join the Jewish people by conversion. But the question of what kind of conversion is required and whether it had to be an Orthodox conversion was left open.

Throughout Jewish his­tory rabbinic courts have been the gatekeepers in this regard. Since Judaism has no central authority, a conversion authorized by one set of rabbis will not necessarily be recognized by others. Israel’s official rabbinical courts, who enjoy monopoly over marriage and divorce of Jews in Israel, are controlled by the Orthodox and Haredi communities. These courts have always refused categorically to accept conversions performed by Jewish movements they consider heretical, most notably the Conservative and Reform movements to which most affiliated American Jews belong. As far as Israel’s rabbinic courts are concerned, a person who undergoes Conservative or Reform conversion has, when it comes to marrying or divorcing in Israel, the status of a non-Jew. But is such a convert a Jew within the meaning of the legislation, which permits every Jew around the world to immigrate to Israel?

To this question the Supreme Court has consistently given a positive answer. Initially, the ruling applied to people who had undergone Conservative or Reform conversions overseas and afterward sought to immigrate to Israel. In these cases the Supreme Court ruled that, for the purposes of registration and the Law of the Return, the state must recognize conversions carried out in recognized Jewish communities in accordance with their accepted procedures.

A new stage was reached in 2005, in a suit brought by people who had immigrated to Israel from several countries and who commenced conversion proce­dures in Israel. They later chose to go overseas to undergo Reform or Conservative conversion, after which they returned to Israel. The Interior Ministry refused to recognize them as Jews. But the Supreme Court ruled by majority that their conversions, popularly referred to as “hop-over conversions,” should be recognized for the purpose of registration and the Law of Return.

A further step was recently taken. The Supreme Court has been petitioned by foreign workers and residents who have undergone conversion by private religious courts operating in Israel outside the official rabbinate. The Supreme Court dealt first with conversion done by private orthodox courts and held by majority that a person who came to Israel legally and undertook such conversion in good faith should be recognized as a Jew under the terms of the Law of Return. The issue regarding private conversions performed in Israel by Conservative or Reform Rabbis is still pending.

This leaves us with two paradoxes of the Israeli system. The one is that a person can be officially recognized as Jewish for the purpose of registration and the law of Return and yet considered non-Jewish by another official body, the Rabbinical courts, and thus not be able to get married in Israel.

The second paradox stems from the fact that Secular Zionism had never instituted its own procedure for acceptance into the Jewish people. Neither had the Israeli state done so—it remained dependent on religious bodies on this fundamental question relating to the right to immigrate to Israel. The key to entering the Jewish people and consequently also the State of Israel and receiving its citizenship is in the purview of divergent religious bodies who disagree with one another—some of which do not even recognize the state and over which Israel has no control.

Daniel Friedmann is the former Israeli Minister of Justice (2007-2009) and author of The Purse and the Sword: The Trials of Israel’s Legal Revolution (Oxford, 2016).

Was it right to pass Israel’s Nation-State Basic Law?