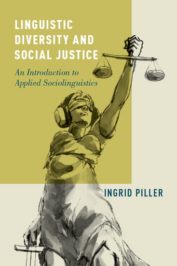 Linguistic Diversity and Social Justice: An Introduction to Applied Sociolinguistics

Adult migrants often struggle to learn the language of their new country. In receiving societies, this is widely seen as evidence that migrants are lazy, lack the required will power or, worse, actively resist learning the new language as an act of defiance towards their new community.

Unfortunately, most of those who point the finger at migrant language shirkers vastly underestimate the effort involved in language learning. The consensus in applied linguistics is that language learning takes a long time and that the precise duration and final outcome as measured in proficiency level are almost impossible to predict. How long it takes to learn a new language as an adult depends on many factors, most of which are outside of the control of an individual language learner, such as age, level of education, aptitude, teaching program, language proximity, or access to interactional opportunities.

Let’s consider the example of two Syrian refugees who were interviewed by the BBC in Berlin: we meet a hard-working father and daughter pair, who are keen to learn German. Not a trace of refusal or resistance to learning German can be heard in their voices. Even so, their language learning efforts and successes at the time of the interview were far from impressive. 16-year-old Noor was making better progress than her father, a man in his mid-40s. However, the difficult circumstances in the large refugee camp where they live and the “constant worrying” about her family left behind in Damascus make it hard for her to concentrate. Her father Mohammad is similarly committed to learning German and establishing a future for himself and his family in Germany. Even so, he frequently misses his German language classes. However, this is not for lack of trying but due to the fact that classes clash with appointments at the immigration authorities. It is only through these appointments that he can hope to regularize his status and to find a way for his wife and children back in Damascus to join him. So, he obviously has to prioritize bureaucratic appointments over attending language lessons.

Noor’s and Mohammad’s stories are just two examples of the many vagaries of adult language learning; most of these are outside of the control of the language learner. Some of the best-understood learner variables out of a sheer endless list are the following:

The list could go on and on. The general point is that your success at language learning is related to who you are and which hand you have been dealt in life.

The factors listed above – age, prior education, socioeconomic status, gender, race, religion, luck – are by and large outside the control of the individual. What second language learning research shows above all is that learning another language is not an easy feat. It requires a considerable investment of resources and it makes a huge difference whether you are learning in a supportive community or one that rejects you. The ultimate outcome of second language learning efforts is not purely an act of willpower or the result of the learner’s personal choices.

Blaming individuals for having made choices outside their control is patently unjust. Not only is the stigma of lack of willpower, laziness, and pig-headed refusal to play their part unjust in itself but it also has unjust consequences: instead of seeking solutions to actual problems we put resources into addressing imaginary problems. The imaginary problem is that migrants need to be told it is desirable to speak the language of the country in which they live and that life without the national language is hard; they will obviously know that from experience. What many of them cannot figure out is how to improve their proficiency in the new language while also starting a new life through the medium of that language. And what receiving societies cannot figure out is how to facilitate the language learning of real people rather than the stick-figures of political slogans.

A longer version of this post was first published on Language on the Move.