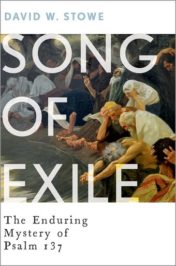 Song of Exile: The Enduring Mystery of Psalm 137

Psalm 137 begins with one of the more lyrical lines in the Hebrew Bible: “By the rivers of Babylon, there we sat down, yea, we wept, when we remembered Zion.” It ends eight lines later with one of the thorniest: “Happy shall he be, who taketh and dasheth thy little ones against the stones.” Partly because it deals with music—another famous verse asks, “How shall we sing the Lord’s song in a strange land?”—the psalm has been like poetic catnip, a siren song luring musicians, composers, and singers alike for more than two millennia. The first four verses have generated by far the most musical settings, from classical pieces (Bach, de Monte, Guerrero, Byrd, Dvořák, Verdi, Bloch, Alkan) to popular renditions sung by Don McLean and the cast of Godspell. But it was “Rivers of Babylon,” an earlier, Rasta-tinged rendition by the Jamaican group, the Melodians, that gave the psalm global exposure. For more versions of the musical psalm, listen to the clips provided below.

“An den Wassern zu Babel” by Heinrich Schütz  (1619)
Born in 1585, Heinrich Schütz was one of the great composers of the 17th century, generally considered the most important German composer before Bach.

“Al Naharot Babel” by Salomone Rossi (1622)
A supremely gifted violinist and composer, Salomone Rossi came to the attention of the powerful Gonzaga family of Mantua. He was so highly regarded that he was allowed to travel freely in and out of Mantua’s Jewish ghetto, a rare privilege. Rossi is best remembered for his pioneering work, Hashirim ásher lish’lomo (“The Songs of Solomon”), which included a setting of Psalm 137.


“An Wasserflüssen Babylon” by J.S. Bach (c. 1720)
One of the best-known of all settings of the psalm, Bach is reported to have improvised on this tune for nearly half an hour in a 1720 concert at St. Catherine’s in Hamburg, as a tribute to the church’s regular organist.

Nabucco by Giuseppe Verdi (1841)
Verdi’s first successful opera, Nabucco (1841), was based on the Babylonian Exile, and one of his most beloved choruses, “Va, pensiero”  features a chorus of Judean captives. Most Italians know this chorus by heart.

Ten Biblical Songs by Paul Robeson (c. 1940)
“But history moves on: Hitler is gone; Prague lives and builds in a new people’s democracy—and now I, an American Negro, sing for her this ancient Hebrew song in the language of the people of Huss and Dvorak, Fuchik and Gottwald: Pri rekach babylonckych, Tam jsme sedavali a plakavali. ” -Paul Robeson

“Rivers of Babylon” by The Melodians, “On the Willows” from Godspell by Stephen Schwartz, and “Babylon” by Don McLean
Three of the most popular recent musical renditions of the song appeared within two years of each other: one (“Rivers of Babylon”) from Jamaica, the other two from the United States.

“Rivers of Babylon” by Boney M. (1978)
By far the bestselling version of “Rivers of Babylon” was recorded by the German-based band, Boney M. Their 1978 cover, with voices soaring over an infectious disco back-beat, became the second biggest-selling single in U.K. chart history, and was the group’s only song to reach the top 40 in the United States.

“Wood Street” by Judy Hauff (1986)
Composed in 1986, Chicagoan Judy Hauff’s setting of Psalm 137 in the latest edition of The Sacred Harp (1991) is one of the most requested songs in that venerable collection. Most of the composers featured lived in the 19th century.

Shanghai Dreams (2001)
Boney M’s cover turns up at an illicit dance held in a factory in China in Shanghai Dreams. In the film, families are “exiled” from Shanghai to the countryside, supporting the country’s industrial backbone in the event of World War III.

“Jerusalem” by Matisyahu (2006)
An inward-looking oath by the psalmist, the middle two verses have been of particular interest to political movements that invoke collective memory to mobilize social action. This one, by the self-styled Hasidic dancehall-reggae artist Matisyahu, carries a strong Zionist message.

Daniel Variations by Steve Reich (2006)
Steve Reich’s Daniel Variations, animated by the savage aftermath of the U.S. invasion of Iraq, features four movements alternating short, gnomic texts taken from the Book of Daniel with fragments of comments by Daniel Pearl, a young reporter who was captured by the Taliban and beheaded.

“Babylon” from Mad Men (2007)
In the first season of Mad Men, Don Draper and his girlfriend make their way to the Gaslight, a subterranean cabaret in Greenwich Village, where a folk trio plays a haunting, minor-key round setting of Psalm 137. The camera cuts to domestic vignettes suggesting Draper’s stream of consciousness: Manhattan as Babylon.

Tulpan (2008)
Boney M.’s ubiquitous cover version recurs again in world cinema, in a Kazhak film that deals with a young man’s return from military service and his poignant efforts to find a wife and establish a traditional life as a sheep-herder.

“By the Rivers of Babylon” by Jack Richard Hodkinson
New settings of Psalm 137 continue to be composed; this is likely the most recent, by an undergraduate at Corpus Christi College in Cambridge, England.

David W. Stowe teaches English and Religious Studies at Michigan State University, where he is interim chair of the English Department. His most recent book is No Sympathy for the Devil: Christian Pop Music and the Transformation of American Evangelicalism. His previous book, How Sweet the Sound: Music in the Spiritual Lives of Americans, won the Deems Taylor Award from ASCAP.