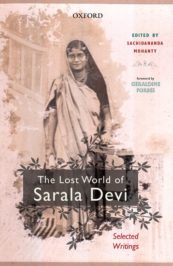 The Lost World of Sarala Devi

The relationship between the critical self and the creative design is a question that remains complex and unresolved. What exactly is the connection between ideology and literature? Does belief play any role in the actual realization of a literary artifact? British novelist D.H. Lawrence once famously declared: “never trust the artist, trust the tale.”

Nevertheless, readers and connoisseurs of literature have always been drawn to interviews, letters, and memoirs of writers in order to understand their novelistic or poetic oeuvres. While some writers are not amenable to easy categorization, there are others whose critical and creative selves seem to coalesce in a seamless manner.

Sarala Devi, 1904-1986, was a prolific Odia writer whose work encompasses many genres including prose, poetry, short stories, essays, literary criticism, novels, and plays. She was a versatile genius who occupies an important place in the domain of women’s history. She was a Gandhian feminist and a critical modernist who eschewed exclusive binaries between the home and the public place, the sacred and the secular. While she was not a theorist in the conventional sense of the term, her views on the subject of feminism were informed by wide readings, critical thinking, and an astute understanding of the women’s location in patriarchy. She recognized women’s oppression as a global phenomenon, and yet was careful to reject the view of women as universal dependents. Similarly, she made a nuanced response to the question of women and religious ideologies. She argued that our critique must be context specific and be informed by particular histories of women in given society and ideologies.

While Sarala excelled as an original feminist thinker, she has distinguished herself equally well in her tales for children. We often see a parallel between her feminist beliefs and the stories for children she handled. In Maru Kahani, she offers a set of fascinating tales for children. In the Preface to this collection, she explains her basic objectives: “I believe that children are more attracted to fantasy than facts. [The stories] contain moral lessons; they have the twin purpose of delight and instruction.”

The stories are dedicated to women colleagues such as Shakuntala Devi, Radhamani Devi, Sailabala Devi, Debahuti Devi, and Rama Devi. The final tale is dedicated to her son Amithabha Mohapatra. There are seven tales from different lands: ‘The Magic Horse’, ‘The Tale of the Persian Merchant’, ‘The Sorcerer Wife’, ‘The Fisherman’s Wit’, ‘The Ungrateful King’, and finally, ‘The Land of the Yakshas’.

In keeping with Sarala’s international vision and outreach, the gripping tales cross national and cultural frontiers. They focus on universal moral and ethical issues such as loyalty, gratitude, obedience and generosity that accord with the ethical approach she always upheld in her life. Most stories have alien settings and yet all have principal Indian characters. This seems to be a deliberate decision, to guarantee local interest and relevance for the Indian child. Her vision was global and yet her approach invariably local. The narrator employs an easy, conversational tone, a typically colloquial style characteristic of a grandmother. Even here, one will notice Sarala’s unfailing interest in the gender and ethical questions. Consider, for instance, the ending of the tale ‘The Magic Horse’:

“As the horse rose in the air, the Prince shouted at the Sultan: ‘O Sultan. You, who should have protected the princess who sought your protection, instead, tried to exploit her. You humiliated and insulted her. If you wish to marry someone, first learn how to seek her permission.’”

Here is an advisory for a new conjugal bonding, meant for the socialization of the young in perfect alignment with Sarala’s abiding faith in equality among the sexes.

Similarly, the story ‘The Tale of the Persian Merchant’ invokes insightfully geographical and cultural resonances from far away Arab and Middle Eastern regions, bringing in cities like Cairo, Aleppo, and Damascus, and food items such as Olive into the discussion. The tale underlines the native wisdom of children in solving issues that are beyond the ken of adults: What the Kazi and the Khalifa could not resolve, was easily done by a group of children engaged in play-acting. As the story concludes:

“The Khalifa learnt a lesson in law from the young boy – how to bring out the truth through intelligence. He was very pleased with the boy. So he gave the boy one hundred gold coins for his wit and bid him farewell.”

Here, Islam is not the alien ‘other’, but part of the lived experience that children of all faiths could empathize with and learn from.

The tales for children that Sarala Devi wrote and published were envisioned and crafted well; they are narrated with a trademark wit and humor. Combining delight and instruction, Sarala produced tales that have retained their freshness, despite the passage in time, and could be offered to the children of today. While Sarala Devi dealt with her many selves with effortless ease, her stories for children were firmly anchored to her feminist beliefs and life values.

Sachidananda Mohanty is Professor and former Head, Department of English at the University of Hyderabad, India. He is also the Vice Chancellor of the Central University of Orissa at Koraput, India. He is the author of The Lost World of Sarala Devi (OUP, 2016).