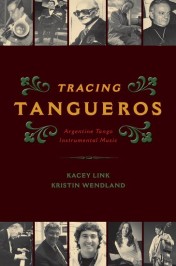 Tango is a multidimensional art form including music, dance, and poetry. It grew out of the confluence of cultures in the Río de la Plata region in South America and has since had over a century-long history. Here are ten things that you might not know about Argentine tango music.

1. A tango musician is a called a tanguero/a. Many tangueros/as are multifaceted musicians who compose, arrange, and/or perform tango music. In contrast, a tango dancer is called a milonguero/a, one who frequents the milongas (places where people dance tango).

2. The bandoneón is tango’s signature instrument. It is a free-reed concertina that originated in Germany in the mid-nineteenth century as a portable organ in parish churches. It probably landed in Argentina on an immigrant ship around the turn of the twentieth century. Fiendishly difficult to play, the bandoneón has four rather illogically organized keyboard layouts. Each button creates a different pitch with opening and closing of the bellows. Listen here to the sounds of the legendary bandoneonist Aníbal Troilo (1914–1975) playing “Pa’ que bailen los muchachos” (“So That the Boys Dance”) in a 1962 recording with guitarist Roberto Grela.

3. The standard tango ensemble is the sexteto típico (typical/standard sextet). Early tango ensembles of the turn of the twentieth century often included flute, guitar, violin and bandoneón. In the 1920s, Julio De Caro (1899–1980) and his school established the standard sextet of two violins, two bandoneones, piano, and double bass. Listen here to a 1928 recording of the Sextet of Julio De Caro playing “Boedo” (referencing the neighborhood on the south side of Buenos Aires). From the 1930s to the 1950s, the standard sextet expanded to include an entire string section and a fila (line) of four more bandoenones. After the 1950s, tango ensembles reduced in size and often returned to new configurations inspired by the sexteto típico.

4. Tango has two distinct accompanimental rhythms: marcato and síncopa. The most basic marcato in four literally marks the beat. Síncopa is an off-beat pattern that includes a number of variations. See the notated examples of marcato and síncopa below.

6. Tango yeites are perhaps the most elusive aspect of performing tango. Colloquially translated as “licks,” these extended techniques provide percussive effects to accentuate the rhythm. The Introduction to Damian Bolotin’s “Soniada” presents a veritable encyclopedia of string yeites.

7.Tangos frequently end with a flourish commonly called “chan-chan.” This cadential tag uses a V–I chord progression with scale steps 5–1 in the top line. The example below from the end of “Tres esquinas” illustrates this typical tango flourish.

8. Pianist and bandleader Osvaldo Pugliese (1905–1995) ran a cooperative orchestra in the Golden Age. In this famous tanguero’s orchestra, each member contributed to the composing, arranging and performing of the works, and each member was paid accordingly. Here is an example of Pugliese and his 1952 orchestra playing his famous “La yumba” (named for the composers characteristic yumba rhythmic technique).

9. Bandoneonist and bandleader Astor Piazzolla (1921–1992) was not the only great post-Golden Age tanguero. Most people outside of Argentina cite Piazzolla’s name if asked to name a tango composer or musician. Yet, equally dynamic and innovative tangueros built on tango’s legacy and sustained long careers. Three such prominent tangueros include bandoneonist Leopoldo Federico (1927–2014), pianist and bandoneonist Julián Plaza (1928–2003), and pianist Horacio Salgán (b. 1916). Examples of Piazzolla’s works as well as those of Federico, Plaza, and Salgán include:

10. Tango today is a living art form in Argentina. Some tangueros celebrate the past with renditions of tango standards like Villoldo’s “El choclo” and Gerardo Matos Rodríguez’s “La cumparsita.” Others push the art form into the future with new compositions, like Bolotin’s “Soniada,” Navarro’s “Contra todos los que rayen,” and Possetti’s “Dalo por hecho.” Here are links to these five tangos:

Kacey Link, D.M.A., is a pianist and scholar residing in Southern California. Kristin Wendland, Ph.D., is a Senior Lecturer at Emory University Department of Music. Together they have given lectures and presentations on Argentine tango throughout the United States as invited university guests and for professional societies. They are co-authors of Tracing Tangueros: Argentine Tango Instrumental Music.