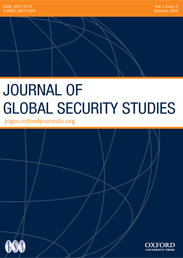 The Journal of Global Security Studies, a new publication from the International Studies Association, launched its first issue with OUP in 2016. The journal aims to publish first-rate work addressing the variety of methodological, epistemological, theoretical, normative, and empirical concerns reflected in the field of global security studies. More importantly, it encourages dialogue, engagement, and conversation between different parts of the field.

What happens when dead bodies crop up where they are not supposed to be? How can this allow us to reflect on how we understand security and insecurity? For example, mass graves can be indicators of crimes against humanity. Recent satellite evidence of mass graves analyzed by Amnesty International outside of Bujumbura has led to a focus on the political violence there, a result of turmoil after Burundian President Pierre Nkurunziza announced his intention to seek a third term. In these kinds of instances, the first step towards understanding the event is often the attempt to arrive at an accurate count of the dead.

Counting the dead is a key focus when the dead appear as a security issue, and is often equated with knowing the truth of what happened, and these numbers can be hotly contested. Debates over drone strikes in counterterrorism policy often take the form of disagreements over death counts. A high militant death toll is an indicator that the policy is successful, and the US government claims that drone strikes kill fewer civilians than conventional war, while critics argue that the civilian death toll of drone strikes is in fact higher than that from manned aircraft. For example, AirWars traces the number of civilian casualties in Iraq and Syria by coalition airstrikes. The US government confirmed 42 civilian deaths in 26 incidents from August 8, 2014, to April 27, 2016. In that same time, AirWars estimates that in these same 26 incidents, between 59 and 70 civilians died, and that there were 172 further incidents in which an additional 1113 to 1691 civilians died.

How dead bodies are counted and assigned value matters just as much as which dead bodies are counted. Critics of drone strikes argue that the US government is not accurately defining militants: a problem with the how of body counts. The current US policy, to count any military-aged-male who dies in a drone strike as a militant unless there is evidence otherwise, shows how a focus on the number of dead itself isn’t sufficient to think about dead body politics. Similarly, the focus on the number of dead has led to a bizarre equation governing the number of allowable civilian casualties. The NCV, non-combatant casualty cutoff value, started out at 0 at the beginning of air operations against ISIS, indicating President Obama’s unwillingness to allow any civilian casualties as part of operations without his express permission. That standard has now been increased to 10, some sources say, small compared to the standard in Iraq in 2003, which was 30, according to Wikileaks, but the real dilemma is how to count casualties in a war increasingly dependent on technology to distinguish friend from foe, and where achieving security is often equated with causing the deaths of others.

In conflict, the odds are already stacked against accurate counts. The Human Rights Data Analysis Group (HRDAG) has established a count of deaths in Syria, using a variety of on the ground reporting sources. By looking at multiple lists, they can examine the amount of overlap to get a sense of the probability that a death is unreported by any of the sources. This helps them to estimate the undercount of the death toll, and a more reliable death count overall, but it gives a sense of the difficulty of counting on the ground. How to count is up for debate, including whether incident reporting or retrospective mortality surveys give the most accurate counts of the dead, and which groups should be considered reliable incident-reporters. There are also potential bias issues that emerge in reporting and collating reports of casualties. One example of this is event size bias: an event involving larger numbers of people is more likely to be recorded than one involving fewer.

Relying on body counts to tell us something about our own security or insecurity is problematic, if only because of what counting leaves out. We tend to pay more attention to higher numbers of deaths; this constrains us from seeing the difficulties in accurate death counts, and from looking beyond counts altogether. Clearly, body counts are problematic, yet they remain potent symbols of security policy. Who is counted, and by whom, as well as the degree to which counting the dead is deemed of value, can shed light on the boundaries between political communities; deaths are more likely to be defined as security issues when the dead in question are deemed to hold value within cultural, social, and national identity groups.

Dead bodies are pieces in a larger assemblage of how political communities understand themselves via shared conceptions of how they live and die and how their deaths are remembered. They are often tools in a larger project of reconciliation after political violence, but there is some intangible sense that counting them matters for ending the insecurity associated with conflict, and that achieving global security will only come with an acknowledgement of death toll. However, not all bodies count the same way, and there is a power dynamic of what bodies are worth and who decides. Thus any agenda for future research that takes dead bodies seriously must do more than count them. The dead body is not simply the material aftereffect of violence, but also a complex political person that invokes ethical and moral questions.

Jessica Auchter is Assistant Professor of Political Science at University of Tennessee Chattanooga. Her book, The Politics of Haunting and Memory in International Relations, focuses on displays of the dead at memorial sites.

How will wars be fought in the future?

How violent images can hurt us