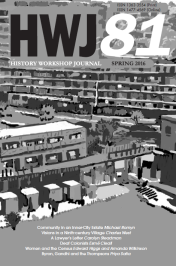 Since its launch in 1976, History Workshop Journal has become one of the world's leading historical journals. Through incisive scholarship and imaginative presentation it brings past and present into dialogue, engaging readers inside and outside universities.

The ‘disappearance’ of booksellers from Hong Kong in recent months reminds us that the free circulation of print can be very directly challenging to the powerful. Within social movements ranging across civil rights, disability, anti-apartheid, socialism, and anti-colonial nationalisms, books, print presses, and bookshops have been central to the movements’ intellectual development and comradeship. The women’s movement has had a similarly close relationship to print; bookshops, periodicals, and presses were a thriving presence within Edwardian women’s suffrage circles.

Bookshops took on a particularly significant role in the women’s liberation movement in the 1970s. The deliberately decentralised, anti-leader ethos of the movement could make it impersonal, or only open to those ‘in the know.’ The visible, accessible spaces provided by bookshops helped hold the movement together. Crucially, bookshops helped make feminism present to those outside the countercultural circles of communes and squats, or the privileged spaces of universities. Any woman could come and browse – and for those who feared the fierce radicalism of women’s centres and consciousness raising groups, this made feminism accessible.

Nonetheless, booksellers have not always been particularly well disposed towards women and feminism. I visited one particularly quirky bookshop recently that divided its stock bluntly into ‘women’ and ‘men’ – though it was unclear whether the category referred to author or reader. In Britain, even those bookshops that saw themselves as radical or ‘alternative’ had a tendency towards gender conservatism. Radical bookshop owners of the 1960s and 70s did not disguise their belief that women customers made frivolous requests, rather than displayed ‘serious’ political or intellectual concerns. Many bookshops were not welcoming to women with children. The countercultural bookshops such as Camden’s Compendium stocked pornography, despite protests from feminists. Where they did stock books on feminism, they tended to have a few token best sellers – Germaine Greer and Erica Jong – and even these were often displayed in the basement. Feminist theory, lesbian novels, and women-only periodicals were not found on their shelves.

Frustration with the book trade led to revolutionary strategies – women-only managing cooperatives staged takeovers of existing radical bookshops. Other women founded their own autonomous bookshops, including Sisterwrite in Islington (1978), Womanzone in Edinburgh (1983), and Silver Moon Women’s Bookshop on London’s Charing Cross Road (1984). At these bookshops, specialist and imported feminist and lesbian books shared the shelves with Virago novels, and books of feminist publishers such Onlywomen Press and The Women’s Press. Feminist bookshops brought new readerships and communities into being, and in doing so, shaped the women’s movement.

Social and political networking within bookshops was as important as the books. Noticeboards offered news about gigs, meetings, and flatshares. Both Sisterwrite and Silver Moon provided women-only cafes, though somewhat bizarrely, Silver Moon were refused an alcohol licence for their café because of their lack of men’s toilets. The principle of women-only spaces was always contentious and hard to sustain. But the bookshops proved active in many additional ways, including refusing to stock books with sexist titles and covers, or selling such books with angry stickers or inserts. Feminist bookshops did not just serve an existing market – they challenged all aspects of their environment. Booksellers pioneered experiments with women-only spaces and developed activist techniques. Difficult decisions over which books to stock meant that booksellers were plunged into controversies over pornography, sado-masochistic practices, black feminism, and relations with men.

The flourishing of feminist bookshops was made possible by some factors unique to the 1970s and 80s. Public funding was available to buy stock and make rents affordable. Local government and Arts Council funds were key to the foundation of many of the radical and independent bookshops. Education and library budgets kept them financially afloat. The radical booksellers were also in contact with each other through the Federation of Radical Booksellers, which offered advice and support. When bookshops faced attacks, the Federation supported their legal battles. The attacks were varied – from arson and broken windows by far right and racist groups, to police raids and confiscation of stock. Gay and lesbian bookshops were particularly hard hit in the 1980s, when Customs and Excise mounted a campaign against books they regarded as indecent. From 1988, Section 28 of the Local Government Act prevented libraries and schools from buying books that ‘promoted homosexuality’, and budgets were withdrawn. Black bookshops were regularly firebombed. Feminist booksellers suffered abusive comments and violence from angry men. Radical bookselling was a stressful and low paid job, undertaken out of political commitment and in the teeth of substantial opposition.

It was not, however, the political opposition that destroyed most of the radical bookshops by the end of the 1990s. The growth of women’s sections in mainstream bookshops suggests a growing readership for feminist books. Instead, the transformation of bookselling away from independent booksellers was caused by the aggressive market strategies of the chain-owned bookshops, and the rising costs of retail rents and rates. Retail moved away from high streets, to out of town shopping malls. Most radical booksellers had always felt ambivalence towards the need to be profitable, and couldn’t or wouldn’t move. The nail in the coffin was the collapse of the Net Book Agreement in 1997. Books could now be sold at discounted prices. Supermarkets and American-owned chains such as Borders entered the market, and independent booksellers rapidly closed.

Today, some radical British bookshops such as Housmans, Bookmarks, Gays the Word and News from Nowhere survive. The last time I browsed in News from Nowhere, the fabulous women-run radical bookshop in central Liverpool, I chatted with the woman behind the till, tried on a t-shirt and bought a pamphlet on a whim. Radical bookselling can still enchant us. Yet despite the resurgence of interest in feminism and other radical politics in recent years, the distinctive world of feminist bookselling is largely over. The last dedicated feminist bookshop, Silver Moon, closed in 2001. Blogs and twitter accounts such as the F-Word and Everyday Sexism capture the vibrancy of feminist ideas and exchanges. But they offer no space for physical encounters, chance friendships, book recommendations, and for putting faces and a community to abstractions of feminist theory. Feminism came alive in bookshop spaces – and we are impoverished by the loss of feminist bookselling from British towns and cities.

Lucy Delap is a Lecturer in Modern British History at the University of Cambridge, and fellow of Murray Edwards College. She was the Director of History & Policy between 2012 and 2015. She works on the histories of feminism, child sexual abuse, gender, labour and religion, and is currently working on men’s encounters with women’s liberation in the 1970s and 1980s. She is the author of Feminist Bookshops, Reading Cultures and the Women’s Liberation Movement in Great Britain, c. 1974–2000 in History Workshop Journal.