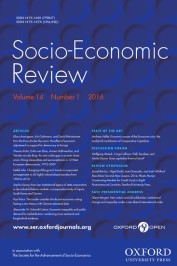 Socio-Economic Review aims to encourage work on the relationship between society, economy, institutions and markets, moral commitments and the rational pursuit of self-interest. The journal seeks articles that focus on economic action in its social and historical context.

The European Union is undergoing multiple crises. The UK may vote in favour of leaving the Union in June. European Union member states are in deep disagreement on various crucial issues, not only on how to handle the stream of refugees from the Near East, but also on how to combat terrorism, and how to deal with Russia. And, in each election, Eurosceptic parties garner an increasing share of the vote.

Given the urgency of these issues, the Eurozone crisis has been relegated to the background of public debates. However, the crisis is still ongoing today. The gross domestic product of the Eurozone is still lower than it was in 2008, in marked contrast to the United States and the United Kingdom. Unemployment in its Southern member states, including France, is very high, with youth unemployment of more than 50% in Greece and Spain, leading to a lost generation in terms of economic and social participation.

Discussions about the origins of the Eurozone crisis have mainly been conducted within economics. Most economists agree on a number of proximate causes for the crisis. On the one hand, it is a debt crisis, with a focus on public debt in Greece and Spain, and the more severe problem of private debt in Spain. On the other hand, it is a crisis of competitiveness. The competitiveness problem has both a product and a price dimension. As for the product dimension, a number of Eurozone economies have a medium-quality production structure that has increasingly encountered massive competition from emerging economies, most notably China. In terms of price competition, unit labour costs have increased much more strongly in these Southern European economies than in Germany.

However, these proximate causes only scratch the surface of the Eurozone problem. They do not explain where the high degree of indebtedness comes from. Neither do they explain why some Eurozone economies encounter persistent competitiveness problems and are not able to mimic the successful German model. In order to identify the deeper causes of the Eurozone crisis, we need to look elsewhere. The institutionalist Comparative Capitalism tradition in political economy can assist our search.

Comparative Capitalism scholarship assumes that different national institutional contexts make for different economic capacities. More specifically, it looks at institutions such as wage bargaining, innovation, and financial systems, as well as the cross-cutting general mechanisms linking these institutions. The European Union consists of economies that can be classified into four basic types with specific combinations of these institutional features, namely the coordinated economies of, for example, Germany and Austria, the dependent economies of Central Eastern Europe, the liberal economy of the UK, and the mixed economies of Southern Europe.

There is simply too much institutional heterogeneity for a common currency in Europe.

At the core of the Eurozone crisis is the problematic co-existence of coordinated and mixed economies within one currency union. The weakness of a system of coordinated wage bargaining in the Southern European economies is a major reason for their loss of cost competitiveness, in particular with regard to the highly coordinated German economy and its focus on wage restraint. The common currency does not allow for devaluations anymore, a formerly well-established Southern European strategy in order to recover competitiveness against Northern competitors.

Moreover, the German economy, with an elaborate innovation system conducible to a specialization in high-quality manufacturing, such as advanced machinery, has strongly benefitted from the rise of emerging economies. This is in marked contrast to the Southern European economies, as it has an innovation system focusing on highly price-sensible medium-quality goods, such as garments and furniture. A common currency with the highly successful German export economy has also led to a much higher exchange rate for the Euro, compared to an imaginary Southern European currency alone, thereby aggravating the competitiveness problem with regard to the emerging economies.

The establishment of the Euro as a common currency has led to a massive decrease of interest rates in Southern Europe. This has not only enabled the Greek government to temporarily compensate for the loss of economic competitiveness by strongly increasing public debt, but also caused a construction boom in Spain, thereby leading to an explosion of private debt – and a further loss of competitiveness.

The implications of these observations on a solution for the Eurozone crisis are very bleak. The economic-institutional requirements for a fundamental improvement of the situation are hardly feasible on political grounds. A solution would require a decade of over-proportional wage increases in Germany, which is deeply unpopular with German companies and work councils. A solution would also require massive fiscal transfers within Europe, in order to upgrade production structures in the South, as well as to provide debt relief for countries such as Greece and Portugal. However, pan-European solidarity is too limited for these kinds of measures.

From the perspective of Comparative Capitalism, the Eurozone features the choice between long-term stagnation and turbulent break-up. There is simply too much institutional heterogeneity for a common currency in Europe.

Andreas Nölke is professor of political science at Goethe University Frankfurt, a member of the Amsterdam Research Centre for International Political Economy (ARCIPE), and an external associate of the Centre for the Study of Globalisation and Regionalisation (CSGR) of the University of Warwick. He is author of the article “Economic causes of the Eurozone crisis: the analytical contribution of Comparative Capitalism”, published in Socio-Economic Review.

Government transparency and the freedom of information [podcast]