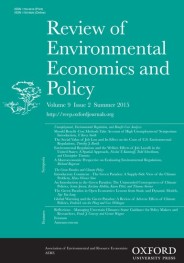 Fine wine is an agricultural product with characteristics that make it especially sensitive to a changing climate. The quality and quantity of wine, and thus prices and revenues, are extremely sensitive to the weather where the grapes were grown. Depending on weather conditions, the prices for wines produced by the same winemaker from fruit grown on the same plot of land can vary by a factor of 20 or more from year to year. Similarly, prices for wines from the same grape type vary enormously, with wines from more conducive climates fetching a much higher price.

There is growing economic literature on viticulture and climate change. Numerous studies examine the relationship between weather and economic outcomes — such as wine prices and quality, prices for vineyard land, and winery revenue and profits for various wine growing regions and cultivars. Surprising to some, the evidence indicates that rising season temperatures can be either beneficial or detrimental to viticulture. This means there will be winners and losers from climate change. In general, the evidence suggests that wine growing regions located near the northern frontier of professional viticulture (e.g., Germany) — or the southern frontier in the southern hemisphere (e.g., Tasmania) — will benefit from further warming. Regions that are located closer to the equator (e.g., Spain or Greece) will be adversely affected.

Despite the progress that has been made in assessing the economic effects of climate change on wine and viticulture, there is still much to learn. First, many studies examine the effect of temperature changes, but do not account for the affect that future rainfall levels may have on grape growing. There is uncertainty about how rainfall levels affect grape growing. And there is also uncertainty about what changes in rainfall are likely to be associated with climate change.

However, the biggest problem with many analyses is that they do not consider the possibility of farmer adaptations to adverse climates. Instead many analysts assume a “dumb farmer” scenario. However, grape growers and winemakers have shown their adaptability to changing climatic and economic environments for thousands of years. As this photo of the Pundericher Marienberg Vineyard shows, German grape growers have adapted over the decades to cool climates by planting grapes to take advantage of the solar energy a properly designed panel can provide.

In addition, earlier harvest dates, the rapidly increasing vineyard area in Canada and England, and the increasing plantings of red warm-climate varietals such as Merlot or Cabernet Sauvignon may be just three examples of current adaptations to a warming climate. Ignoring farmer adjustments, even if they are only partial, will overestimate the long-term costs of climate change.

Finally, climate change is likely to disproportionally affect grape growers and winemakers in European countries, such as France, that emphasize their location in their marketing rather than the grape varieties they grow, which inhibits various adaptations. Neither varietal nor regional substitutions can be easily achieved in these countries and in some cases are prohibited. This suggests that the notion of terroir wines, where a grape variety is expressed in terms of certain land and weather characteristics, may be too inflexible to allow for adaptations to a changing climate. Thus, unless the appellation rules in Europe are loosened and planting rights are abolished, this region will is likely to be one of the losers from climate change.

Orley Ashenfelter is the Joseph Douglas Green 1895 Professor of Economics at Princeton University. He is a recipient of the IZA Prize in Labor Economics, the Mincer Award for Lifetime Achievement of the Society of Labor Economists. He is a founding member and the president of the American Association of Wine Economists. Karl Storchmann is an applied micro-economist whose research focuses on environmental and industrial organization-relevant issues related to energy, transportation, and the wine market. He has been a Clinical Professor of Economics at New York University since 2009. He is a co-founder and vice president of the American Association of Wine Economists (AAWE) and is also a co-founder and Managing Editor of AAWE’s academic publication, the Journal of Wine Economics. They are the authors of the article "The Economics of Wine, Weather, and Climate Change" published in the Review of Environmental Economics and Policy.