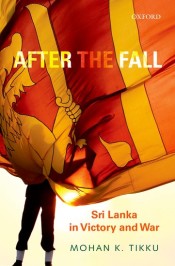 After the Fall: Sri Lanka in Victory and War

‘Yahapalana’ is a term that has been much in use in Sri Lanka’s political discourse ever since the present government came to power early last year. ‘Yahapalana’ is a Sinhala word, and means “good governance.” The Sirisena government was voted into office in the January 2015 election on a promise of “good governance.” But one year down the road, the term has acquired other shades of meaning that are not always complimentary, and sometimes sarcastic.

Recently, when Sri Lanka had an island-wide power breakdown lasting over six hours, it was described as “Yahapalana shining.” A few days later, as Parliament approved bigger pay packets for its members, sections of the media put it down as “Yahapalanya Bonanzas.” Former President Mahinda Rajapakse then wrote a piece on the foreign debt crisis facing the country (some of which was the product of the profligacy under his own presidency) he called it the work of the “Yahapalana government” “Yahapalana” is fast turning into a stock term used to make a point against the very government that introduced it in the political vocabulary in the first place.

The reason that a straight Sinhala word has acquired new inflexions of meaning is to be seen as the common people’s way of responding to a situation where the Opposition space has been practically lying unoccupied. With about fifty groups and parties sharing power in a rainbow coalition that now rules Sri Lanka, there hardly is an opposition left to voice the contrarian viewpoint.

Traditionally, Sri Lanka has had two main parties: the right wing United National Party (UNP) and the left-of-center Sri Lanka Freedom Party (SLFP)—representing the two poles of the political spectrum. For the rest, an assortment of smaller Left parties along with parties representing Muslims and the Tamils, are there. But they have always been marginal players.

In the years since Independence, UNP and the SLFP had taken their role as rivals so seriously that they even took turns at destroying the chances of peace whenever one of them tried to work out any kind of a solution of the ethnic problem with the Tamils. Such obduracy of the two main parties was one reason why the Tamil question had defied resolution for so long.

However, the relative positions of the two parties underwent a radical change with the January 2015 presidential election. For there was no way for them to dislodge an entrenched President Rajapakse except by joining hands. And they did that, and more. Post-victory, the two parties then came together in a power-sharing arrangement and formed the new government with a medley of smaller groups and parties following in tow.

Ever since, the UNP, headed by Prime Minister Ranil Wickramsinghe, and bulk of the SLFP, led by President Maithripala Sirisena, have sought to keep their ideological differences and traditional animosities down to run the government together as a coalition. What keeps them together in this rare instance of ‘cohabitation’—Sri Lankan style— is a single word, Yahapalanaya!

But in recent weeks, the adhesive power of that term has been coming under strain. And the reasons are not far to seek.

To begin with, the present government is expected to deliver on such formidable tasks as no other Sri Lankan government since Independence has had been called upon to do. It is committed to deliver on constitutional reforms; find a solution to the Tamil grievances in terms of effective devolution of powers; meet international demands for transitional justice to the victims of the war; and, provide ‘good governance’ to the people along with a healthy corruption-free economy.

In the immediate term, it is the economy that could prove to be the government’s Achilles’ heel. Last year, Colombo turned to India and the IMF to manage its cash flow problems. This year, it may have to do it again. On top of that, there are livelihood issues like unemployment and rising prices. The partial withdrawal of subsidy on chemical fertilizers has upset the farming community. In an instance of poor timing, the government raised tax rates and the price of wheat within days of revising the perks of members of parliament. That again did not go down well with the people. Now, it has promised to raise minimum wages as well as government salaries—and eventually, shall have to find the resources to meet these commitments.

It is here that Mahinda Rajapakse along with his motley bunch of supporters (rather grandly called the ‘Joint Opposition’) senses his opportunity. If he can play on public discontent over the economy, he could make some headway, and possibly manage the consequences of the corruption cases stacked against him and family. Though it is just a small rump of SLFP members that is supporting the former President, it has still left the parent party with something of a split personality.

Like politicians everywhere Rajapakse told a rally in Colombo on March 17 (his first in many months) that the corruption cases against him—and still waiting for answers—were ‘politically motivated’. Further, he challenged the government to let him manage the economy if they were lacking the competence to do it. And finally, went on to promise restoration of full fertilizer subsidy to farmers as and when he was returned to power.

He is likely to continue playing that tack in the coming months. If he can trump the government on its economic performance, he could manage to get out of the many problems that have come to haunt him from his past as the President.

By the same token, the Sirisena government’s success in its much vaunted plans to deliver a new constitutional framework for the country and a fair deal to the Tamils in the long term would depend on its success in managing the economic issues—ranging from the foreign debt crisis to rising prices— in the short term. Getting that order wrong would mean Sri Lanka missing a much delayed opportunity to redesign its political and social architecture. It is always the economy, stupid!

Mohan K. Tikku is Director, Centre for Future Studies, Gurgaon, India and has been a leader writer and foreign correspondent of the Hindustan Times, New Delhi. He is the author of After the Fall: Sri Lanka in Victory and War.