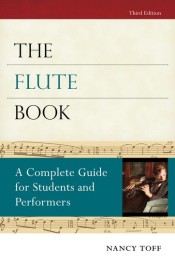 The Flute Book: A Complete Guide for Students and Performers

This March, we’ve been focusing on the flute and its history and importance in the music scene. Resident OUP history editor Nancy Toff is also active in the flute world as a performer, researcher and instructor. In order to delve into Nancy’s wealth of knowledge about the flute, we asked Meera Gudipati, currently attending the Yale School of Music as a Master of Music, to interview her about flute performance, music history, and other favorite flutists.

Performance practice has increasingly become more important in the music world today. How has the flute sound and style changed over the last decades?

Since the advent of LP recordings in the mid-20th century, classical flute sound has become more internationalized. National styles are far less distinct than they once were. But at the same time, there has been a return both to historically informed performance of early music (on both historical and modern instruments), and fascinating experimentation with new sounds and new instruments—for example, Robert Dick’s glissando headjoint and his many bags of sonic tricks, and Clare Chase’s electronically enhanced performances with the International Contemporary Ensemble (ICE).

What are some of the flute repertoire pieces you discovered that deserve more attention?

I’ve always thought that the Ibert Pièce for solo flute was an undiscovered gem, and there’s a lot of French woodwind ensemble repertoire from the first quarter of the twentieth century that’s in unjustified semi-retirement. I’m researching the career of Louis Fleury right now, and finding lots of repertoire to revive.

What are some of your favorite recordings of flutists?

It’s hard to play favorites, but… William Kincaid’s version of the Griffes Poem is stuck in my ear as the way to play it; he learned the piece from Barrère, for whom Griffes wrote it. It has the most color of any recording available. Julius Baker’s disc of the Debussy Sonata for flute, viola and harp is another classic, and the LP of baroque cantatas with Dietrich Fischer-Dieskau and Jean-Pierre Rampal is an examplar of stylish playing. Of today’s generation, I won’t play favorites!

What is your favorite part about being an archivist for the New York Flute Club and National Flute Association?

Two very different things. For the NY Flute Club, the detective work of finding historical programs that our archives are lacking. I’ve turned up odd programs in Woodstock, NY; Atlanta; Chapel Hill, NC; and other seemingly unlikely archives. For NFA, getting to talk with the leaders of our profession, and recording oral histories with some of the leading players and composers of the twentieth century.

Do you have any new projects that you are working on?

I’ve been researching the life and work of Louis Fleury for several years now. Unfortunately, I haven’t had the time to do the European research that I need and want to do. And I’m also looking forward to the centennial of the New York Flute Club in 2020, which will be the focus of some wonderful celebrations.

You have created your career around your passion for the flute and history. What do you love most about your daily life?

I get to satisfy my intellectual and musical curiosity every day. My authors educate and challenge me in all sorts of interesting ways, and I learn both from them and from my musical research. I love working on projects with my performing colleagues and seeing the fruits of my research show up on concert programs and in music curricula. I get a huge kick out of being able to help answer research questions for a wide variety of scholars.

During your studies with Arthur Lora and James Pappoutsakis, what are some of the most important lessons you learned?

They were very different teachers. Arthur Lora taught me in a very well-rounded way, technique, sound, the basics of ornamentation, a wide range of literature. He recognized my interest in history early on and built parts of lessons around that. By contrast, Mr. Pappoutsakis was all about sound, and he taught totally by demonstration—he did so much to improve the quality of my tone. And of course he worked a great deal on orchestral excerpts, which was extremely valuable.

What are some of the best libraries or centers for doing research about the flute?

The single most important archive in the United States is the Dayton C. Miller Flute collection in the Library of Congress, which has 1,500 instruments, thousands of pieces of music, thousands of books, trade catalogs, works of art, correspondence. It’s a flute historian’s paradise. And of course the main collections of LC have many treasures as well, both published music and literature and archival collections of musicians (Copland, Bernstein, etc.). The Marcel Moyse papers and the Joachim Andersen papers are at the New York Public Library for the Performing Arts, as are the papers of many other musicians important to flute history. For the Paris Conservatoire, the incubator of modern flute playing, the archives are at the Archives Nationales in France, but there is also a rich lode of materials at the Bibliothèque Nationale in Paris. All the great libraries of Europe have wonderful collections of music, and happily, it’s possible to do a great deal of advance, preparatory work with their online catalogs to make research visits more efficient.

Meera Gudipati currently attends the Yale School of Music as a Master of Music.

Nancy Toff is the author of The Flute Book, The Development of the Modern Flute, Georges Barrère and the Flute in America, and Monarch of the Flute: The Life of Georges Barrère. Highly respected as a writer, researcher, and lecturer, she has been a consultant to the Dayton C. Miller Flute Collection in the Library of Congress and the Department of Musical Instruments of the Metropolitan Museum of Art and was curator of an exhibition on Georges Barrère at the New York Public Library for the Performing Arts at Lincoln Center. She is a past president of the New York Flute Club. Toff is also the 2012 winner of the National Flute Association's National Service Award.

Music in history: overcoming historians’ reluctance to tackle music as a source