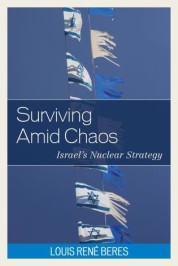 Notwithstanding the July 2015 P5+1 Vienna diplomatic agreement with Iran, Israel will soon need to forge a more comprehensive and conspicuous strategic nuclear doctrine, one wherein rapt attention is directed toward all still-plausible nuclear enemies. Irrespective of precisely which national and/or sub-national nuclear adversaries Jerusalem may sometime have to face, this indispensable doctrine will need to satisfy at least two intersecting criteria. In principle, therefore, it will need (a) to identify and consider all available strategic options (deterrence, preemption, active defense, strategic targeting, nuclear war fighting); and (b) to correctly correlate all of these overlapping alternatives with imperative survival goals.

“Everything is very simple in war,” says Carl von Clausewitz, in his 19th-century classic, On War, “but the simplest thing is still difficult.” By “difficulty,” Clausewitz means (among other things) complexity. In this connection, Israel’s now systematically-configured doctrine will need to take close account of: (c) certain possible interactions between assorted strategic options; and (d) certain determinable synergies that could possibly obtain between enemy attacks. By focusing on synergies, or on what military planners more typically call “force multipliers,” Israeli strategists could acknowledge that in certain crucial matters of war and peace, the adversarial “whole” could become much more dangerous than the simple sum of its “parts.”

Significantly, calculating these particular interactions and synergies will present Israel with a computational task on the highest order of intellectual difficulty. It follows, going forward, that the progressive refinement of Israel’s nuclear deterrent must always be viewed as a primarily intellectual requirement, and not as a merely operational task or narrowly political expectation.

To begin its pertinent calculations, Jerusalem must first identify the basic goals of any Israeli nuclear deterrence posture, here with special reference to required enemy perceptions of  both ability and willingness. Before a rational adversary of Israel could be suitably deterred by any Israeli nuclear deterrent, that enemy would first need to believe that Israel had both the capacity to launch appropriate nuclear reprisals for certain forms of aggression, and the will to undertake such a launch. In matters involving a prospectively irrational nuclear enemy of Israel, successful deterrence would then need to be based upon certain threats to enemy values other than national survival, and/or would need to be complemented or supplanted altogether by strategies of preemption.

In law, when they are permissible, such strategies are usually known as expressions of “anticipatory self-defense.” In some circumstances, it could conceivably help Israel to feign irrationality itself (earlier, then Minister of Defense Moshe Dayan had stated: “Israel must be seen as a mad dog, too dangerous to bother.”), but any actual Israeli resort to pretended irrationality could turn out to be a double-edged sword. Here, the principal danger posed would be a nuclear enemy that responds to Israel’s apparent irrationality with its own “defensive” first strike. In such cases, the logic behind the “rationality of pretended irrationality” strategy would backfire upon Israel, perhaps even incentivizing an enemy to “preempt” an otherwise expected Israeli preemption. Once again, everything here might seem “simple,” but could, in fact, be exceedingly “difficult.”

In meeting the perceived ability criterion of successful nuclear deterrence, Israel will first need to demonstrate, inter alia, the substantial invulnerability of its own nuclear retaliatory forces to enemy first strikes. Like the United States, Jerusalem is increasingly likely to depend upon some form or other of strategic triad deployments. Already, it is very likely that Israel has begun to embark upon serious sea-basing of a portion of the country’s still-undeclared nuclear forces.

Looking ahead, it is plain that it will be in Israel’s long-term survival interests to more fully commit to certain submarine-basing nuclear options.  Israel is a tiny country, and its land-based strategic forces could sometime present to enemies as too-vulnerable. In part, whether or not Israel should proceed to more explicit submarine-basing of its presumed nuclear retaliatory forces, it could still acquire meaningful deterrence benefits from a nuanced and incremental end to “deliberate nuclear ambiguity,” or the “bomb in the basement.” Although somewhat counter-intuitive, Israel will soon have to clarify that at least certain specific sectors of its presumptive nuclear retaliatory forces are not only survivable, but also “usable.” Ironically, this could mean forces that would not appear, prima facie, as “too destructive” for operational military use.

From the early days of first Prime Minister David  Ben-Gurion, Israel has understood the overriding need to rely upon a “great equalizer,” that is, on nuclear weapons and corresponding strategy. There are, of course, a great many circumstances in which any nuclear option would be unsuited – most obviously, in any plausible forms of regional counter-terrorism – but, in the end, there can be no viable substitute for such a residual option. Doctrinally, Israel has already rejected any notions of theatre nuclear deterrence, and/or nuclear war-fighting; nonetheless, there are still some identifiable circumstances wherein a nuclear exchange might simply not be preventable.

On this point, Pakistan, in another prominent theatre of assorted military nuclear risks, last year accepted a strategy of theatre or tactical nuclear deterrence. Among other things, this explicit acceptance signaled a dramatic shift away from classic Cold War patterns of “mutual assured destruction” (MAD) toward what Kennedy-era Americans used to call “flexible response” or (more recently) “nuclear utilization theory.” Speaking of Cold War, it is clear that we are now entering into a “Cold War II,” and that Israel’s military nuclear doctrine should already begin to factor this re-emerging polarity into its wider security-policy decisions.

What this means, for Israeli security, is that Jerusalem must take appropriate steps to ensure the plausibility of (1) and (2), above, and, simultaneously, the implausibility of (3) and (4).

Submarine deployments could prove helpful or even indispensable to Israel’s nuclear deterrence posture. Submarines, after all, still represent the ultimate stealth weapon, and a submarine force could essentially guarantee the ability to unleash a catastrophic retaliatory strike.

Because of Israel’s irremediable lack of strategic depth, the small country’s developing submarine force represents an “ace in the hole” element of strategic deterrence. Already, Israel is upgrading its Dolphin I submarines purchases from Germany with additional Dolphin II submarines. These boats are diesel powered, and unlike the US nuclear submarine capability, are more or less limited by the length of time they can remain submerged. The INS Rahav, Israel’s newest submarine from Germany, arrived in Haifa on December 17, 2015, and joined the INS Tanin, Tekuma, Leviathan, and Dolphin. A sixth submarine has been ordered from Germany.

Israel’s submarines have been designed and built to meet very specific Israeli requirements, and are larger than the original German boats. The Rahav is over 220 feet (67 meters) long, and weighs more than 2,000 tons. One must assume that this larger size is intended primarily to accommodate nuclear tipped missiles. In essence, a complex sea-basing capability will be critical to maintaining Israel’s nuclear deterrent.

In the seventeenth century, English philosopher Thomas Hobbes, in  his literary (not nautical) Leviathan, soberly intoned that “Covenants without the sword are but words.” Today, there is nothing about the 2015 Vienna Agreement that will in any way meaningfully curtail Iran’s steady policy of military nuclearization. On the contrary, it may already be prompting the reciprocal nuclearization of certain Sunni Arab rivals in the region, most evidently Egypt and/or Saudi Arabia.

Looking ahead, Israel will need to rely increasingly on a multi-faceted doctrine of nuclear deterrence; moreover, certain elements of this “simple but difficult” doctrine will soon need to be rendered less “ambiguous.” This will imply, in turn, an even more determinedly “synergistic” Israeli focus on prospectively rational and irrational enemies, including both national and sub-national foes.

Let it finally be known. Thomas Hobbes’ Leviathan bears a direct intellectual connection to Israel’s submarine of the same name. Diplomatic agreements can never save Israel.

Israel’s nuclear forces and associated doctrine can offer Israel relevant existential assurances, but only through a corollary policy of intelligent and calculated “non-use.” In this apparently paradoxical relationship, Jerusalem can find counsel in the ancient strategic wisdom of Sun-Tzu. Says the oft-quoted Chinese strategist in The Art of War:  “Subjugating the enemy’s army without fighting is the true pinnacle of excellence.”