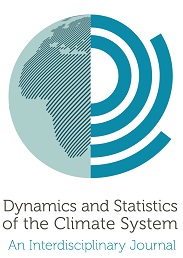 Dynamics and Statistics of the Climate System: An Interdisciplinary Journal

Dynamics and Statistics of the Climate System is a new open access journal published by Oxford University Press. The journal will enable significant advances in this important area through encouraging papers that draw on the different disciplines involved in this work, including mathematics, statistics, computer science, physics, biology, chemistry and climate science itself.

We are living with a climate system undergoing significant changes. Scientists have established a critical mass of facts and have quantified them to a degree sufficient to support international action to mitigate against drastic change, and adapt to committed climate shifts. The primary example being the relation between increased atmospheric carbon dioxide concentrations and the extent of warming in the future. But the climate system in its entirety is a highly complex system, and mysteries abound as to how its internal mechanisms work and interact with each other.

The climate has evolved through massive changes to where we are today. It continues to evolve on long time scales but is also impacted by two factors acting on human time scales. First, there is the ongoing internal variability resulting from a plethora of natural cycles. El Niño is an exemplar, but variability occurs at all levels of the system—in the atmosphere, ocean, cryosphere, biosphere, and through their connectedness—and spans a wide range of time scales from weeks to centuries. Moreover, modes of variability can conspire together to produce unanticipated and seemingly unrelated effects. Secondly, there are changes in radiative forcing, recently dominated by anthropogenic emissions, but also affected by other factors including land use, ocean carbon uptake, solar variability, and feedbacks such as impacts on albedo from melting ice and changing cloud patterns. It is this complex mixture in a dynamically evolving system that the scientific community is striving to unravel.

Climate science is in an unusual situation in that it is an experimental science but one in which the experiments are not restricted to a traditional laboratory. Because experiments cannot be carried out on the full climate system, mathematical replicas of the Earth have been developed in order to test scientific hypotheses about how the planet will react in different circumstances. These are the climate models hosted at around 30 or so climate centres around the world that provide the main source of predictive information in the Intergovernmental Panel on Climate Change assessment reports. They are each highly complex entities in themselves involving massive computational codes. The upkeep and development of these codes raises significant mathematical issues, but the involvement of the mathematical sciences in the study of climate goes far beyond these operational tasks.

The complementary view to the climate as a deterministic dynamical system involves compiling information from observational data. These observations, both from the modern instrumental systems and from the distant past using palaeoclimate proxies, are uncertain, which means that we need to use sophisticated statistical methodology to estimate and map properties of the Earth’s climate system. The two viewpoints come together as significant uncertainty accompanies any model projection and so their output is also properly regarded as statistical.

The mathematical sciences are playing a growing role in climate studies at all levels. Models of more modest dimension than the models residing at climate centres are gaining prominence. These conceptual models can help us see the relations between different internal mechanisms that can be hidden in the full model. Key processes can often be studied in isolation and their modelling brings considerable insight into the overall climate. Such processes include biogeochemical cycles, melting of sea and land ice and land use changes. The internal structure of such processes and their impact on other aspects of the climate are revealed by mathematical and statistical analyses. Such analysis is also critical in the proper inclusion of these processes through parameterization.

Ultimately, both understanding and prediction of the climate depend equally on models, that encode physical laws, and observations, that bring direct insight into the real world. Melding these together to tease out the optimal information is an extraordinary mathematical challenge that demands a blend of statistical and dynamical thinking, in both cases at the frontiers of these areas.

A version of this article originally appeared as an editorial in Dynamics and Statistics of the Climate System: An Interdisciplinary Journal, 6th January 2016.

Christopher K R T Jones is the Bill Guthridge Distinguished Professor in the Department of Mathematics and Domain Scientist in Mathematics in the Renaissance Computing Institute at the University of North Carolina at Chapel Hill. He is director (and one of the founding members) of the Mathematics and Climate Research Network. He is also Editor-in-Chief of Dynamics and Statistics of the Climate System: An Interdisciplinary Journal. His research focuses on using dynamical systems as a tool for solving problems that originate in applications. He is particularly interested in ocean dynamics and related issues in the climate system.