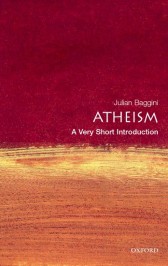 Atheism is the absence of belief that God, and other deities, exist. It is difficult to ascertain how many of the world’s population are atheist as surveys don’t tend to differentiate between the irreligious and atheist. However, it is clear from polls that Europe and East Asia are the regions with the highest proportion of non-believers. In 2015, over 60% of people in China said they were atheist in a survey. It is also clear that numbers of atheists are growing across the world. How much do you know about this belief system? Julian Baggini, author of Atheism: A Very Short Introduction, tells us the ten things we never knew about atheism:

Julian Baggini is editor of The Philosophers' Magazine, and the author of Making Sense: Philosophy behind the Headlines and Atheism: A Very Short Introduction.