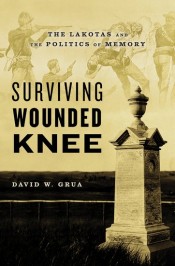 Surviving Wounded Knee: The Lakotas and the Politics of Memory

Today, 29 December 2015 marks the 125th anniversary of the Wounded Knee Massacre of 1890, when the US Seventh Cavalry killed the Lakota Chief Big Foot and more than two hundred of his followers in South Dakota, ostensibly for their adherence to the Ghost Dance religion. In the years since 1890, Wounded Knee has become one of the most contested events in American history, with the US Army claiming it was the final heroic victory in the 400 year “race war” between civilization and savagery, while the Lakota survivors argued that it was a horrific massacre. For three decades after Wounded Knee, the most prominent advocate for the survivors’ compensation claims was army general Nelson A. Miles, who, ironically, also created the tense environment that preceded the massacre. What explains this contradiction?

As the Ghost Dance spread through Native American communities in the American West during the late 1880s, Miles was assigned to investigate the new phenomenon for the War Department. Miles wrote alarming reports describing a vast Indian conspiracy, which, if not checked, would lead to the greatest Indian war in the nation’s history. Acting on the commander’s reports, the war department sent 7,000 troops to maintain control of the Lakota reservations in North and South Dakota, avert the feared uprising, and protect neighboring settlements. It was also Miles who issued the fateful order commanding the US Seventh Cavalry to apprehend Big Foot—who Miles believed was a “hostile” Ghost Dancer—and disarm his followers. If the Lakota chief resisted, Miles authorized the cavalrymen to “destroy him.”

When the Seventh Cavalry captured Big Foot at Wounded Knee Creek, South Dakota, the troops found a pneumonia-stricken chief with his cold and frightened followers. Big Foot explained that he was not a hostile, but instead was trying to meet with other chiefs to arrange a peaceful solution to the crisis with the soldiers. When the troops moved to disarm Big Foot’s warriors, a deaf and confused Lakota fired his gun into the air, a shot that led the troops to unleash overwhelming force onto the bed-ridden chief and his fleeing people. More than 200 Lakota men, women, and children died that day. Later, one of the cavalry’s defenders argued that the soldiers had simply followed Miles’s orders.

Rather than praise the Seventh Cavalry for following his orders, however, Miles condemned Wounded Knee as “the most abominable military blunder and a horrible massacre of women and children.” He relieved the Seventh Cavalry’s colonel, James W. Forsyth, from command and instituted a military court of inquiry. Despite strong discouragement from top War Department officials, who ordered Miles to discontinue the investigation, the general doggedly insisted that the inquiry would continue. Why did Miles pursue this course? One possible answer is that the general knew that his rhetoric and orders had contributed to the tense atmosphere that led to the massacre, and he may have believed that the Forsyth inquiry would deflect attention from Miles himself. While there is likely some truth to this, it is also true that for decades prior to 1890 Miles had been on record as opposing the excessive use of violence when dealing with Native peoples. He had long advocated negotiation and diplomacy rather than massacre to resolve difficulties with Indians. When viewed from this perspective, Miles’s actions after Wounded Knee come into focus.

Ultimately, Miles was unable to control the outcome of the court of inquiry. Based primarily on testimony from Forsyth’s own officers, the court exonerated the colonel. The War Department restored Forsyth to his command, awarded 20 Medals of Honor to his troops, and erected a monument to honor the soldiers killed at Wounded Knee.

Although Miles had lost the struggle over the meaning of Wounded Knee in 1891, he would subsequently emerge as the Lakota survivors’ most prominent champion as they pursued justice for the wrongs committed against them. In the years following 1890, brothers Joseph Horn Cloud and Dewey Beard had led the survivors’ engagement in the politics of memory. Horn Cloud and Beard had lost their parents, two brothers, and a niece at Wounded Knee. Beard also lost his wife and newborn child, aside from sustaining multiple gunshot wounds. Relying on Horn Cloud’s literacy, the brothers had erected a monument in honor of Big Foot’s people at the Wounded Knee mass grave, had dictated several accounts to sympathetic whites describing the killings, and had filed multiple claims seeking compensation from the government.

In the late 1910s, Horn Cloud and Beard sought Miles’s assistance in hopes that his prominence would help their cause. Miles obliged, asking the federal government “to atone in part for the cruel and unjustifiable massacre of Indian men and innocent women and children at Wounded Knee.” Miles’s advocacy led to government investigations in 1917 and 1920, in which bureaucrats recorded dozens of statements from the remaining survivors. Although the 1920 inquiry concluded with a modest proposal that the government compensate the Lakotas $20,000 for property stolen from the killing field by artifact seekers, the government took no action.

Miles passed away in 1925 without seeing justice awarded to the Lakotas. His advocacy for the survivors’ claims was doubtless a result of his longstanding opposition to the use of excessive force against Native peoples. Yet his support for the Lakotas may have also been motivated by a desire for redemption for his role in the events leading to the massacre. Whatever his motivation, Miles’s comments on Wounded Knee would subsequently be quoted in the halls of Congress in support of bills designed to “liquidate the liability of the United States” for the massacre. These bills did not ultimately become laws, but Miles’s words in favor of the Lakota survivors continue to call upon the nation to atone for the wrong committed at Wounded Knee.

David W. Grua, a historian and documentary editor for the Joseph Smith Papers, holds a PhD in American History from Texas Christian University. He is the author of Surviving Wounded Knee: The Lakotas and the Politics of Memory.

Sitting down with author and historian Colin G. Calloway