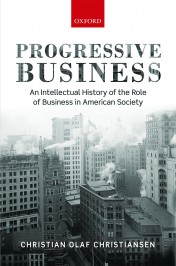 Progressive Business: An Intellectual History of the Role of Business in American Society

Recently, debates about inequality have risen to the forefront in academic and public debates. The publication of the French economist Thomas Piketty’s Capital in the Twenty-First Century in 2013 did not, to say the least, go by unnoticed. And many other prominent economists have partaken in the debate about global inequality: Paul Krugman, Joseph Stiglitz, and Angus Madison, just to name a few.

This spectacular inequality debate goes far beyond the writings of economists, however. Legal scholars have suggested looking much more closely at the kinds of laws which have been passed which have furthered inequality. They have pointed out that capitalism is not just an economic system, but also a legal and institutional construction. Efficient property rights, for example, are fundamental for the workings of a capitalist market economy. And therefore, from this perspective, the perpetuating and rising of inequality under present-day global capitalism has not just got to do with the ‘natural’-like economic laws of capitalism, but also its – actual – juridical laws.

Human rights scholars have also turned their attention to inequality. Their question is this: why have human rights been so inefficient in countering the rise of inequality? And why is it that social and economic human rights (such as the right to an adequate standard of living as stated in the United Nations Human Rights Declaration of 1948) have been much less legitimate than political and civic human rights?

The inequality debate has also been taken up by sociologists, who indeed have had a long-lasting interest in the topic. They have inquired into the social consequences and the causes of inequality and poverty. One prominent example was French sociologist Pierre Bourdieu, who tried to explain many riddles of why unequal social orders tend to reproduce themselves. Bourdieu looked at – and inspired many subsequent studies of – dimensions of gender, ethnicity, and class.

Inequality, then, surely has economic, legal, and social aspects. One dimension which seems to cut through all of these aspects is a historical one. After all, no aspect of anything human seems to escape the dimension of time. And so historians, as well as economists, legal scholars, and sociologists, have been struggling with understanding the historical dynamics and patterns of inequality.

The other dimension which cuts through all these aspects is a conceptual one: how can one define inequality? How to adequately distinguish between, for example, inequality of resources, of opportunities, of capabilities, of wealth, and of health and life expectancy? Such questions are not just relevant to philosophers, who – like economists and sociologists – quarrel about which levels of inequality are desirable or undesirable. It is also highly relevant for the ongoing political debates about what to do with inequality. Should we raise taxes? Opt for more redistribution? Aim at economic growth, accept initial inequality, and then wait for the level of inequality to decline?

Questions concerning inequality is keeping a lot of people busy, and is likely to do so in any foreseeable future. Hopefully all this ‘inequality business’ will make us understand the multiple dimensions of inequality better. Hopefully this inequality business will, in the end, inspire some new initiatives which will help dramatically lower the current levels of extreme and absurd global inequality.

But one particular aspect, however, which remains understudied, at least from a historical point of view, is the remarkable development in recent decades where business organizations, wealthy businessmen and women, and businesses themselves became crusaders against inequality. In brief: inequality is not just the business of academics, politicians, and activists, but it has also become a business matter – something that the world of corporate leaders and the business elite cannot ignore. Some examples will demonstrate what I am alluding to.

First, at the level of high politics and international organizations, the United Nations have, under the leadership of former secretary-general Kofi Annan, embarked upon a new approach to corporations. From the initiation of the so-called United Nations ‘Global Compact’, first pitched to business leaders at the World Economic Forum in Davos, Switzerland in January 1999, corporations were to be seen as ‘creative partners’, embracing universal values of human rights, labor, and environmental standards. Annan appealed to the corporate worlds’ self-interest in avoiding any backlashes against globalization, opting for a ‘globalization with a human face.’ Since then, the line of the United Nations is to involve corporations as partners in achieving its high-profiled Millennium Development Goals (as of 2015 Sustainable Development Goals), arguably one of the most important current inequality or poverty reduction programs in the world.

Second, influential business, management writers, and development economists have argued that, in a world where the neoliberal Washington consensus as well as the state-based approach to poverty has failed, businesses should be directly involved in the battle against poverty. They have thus suggested that businesses should target ‘the bottom of the pyramid’, that they should ‘create shared value’, have a wider sense of their ‘corporate social responsibility’, or that they should exhibit sound ‘corporate citizenship.’

Fourth, individual companies have actively joined the crusade against inequality. Take Starbucks as an example: in March 2015 it launched a campaign called #racetogether, where baristas were to write this hashtag on their coffee servings, to start a discussion on race. The campaign turned out to be a disaster and was quickly pulled back. But it surely showed that inequality had become a business matter.

This development brings testimony to a major, tectonic shift in the institutional landscape of the world. It took its departure in the 1960s, when people increasingly turned their attention to multinational corporations as major players in the world economy. With their rising power also came rising demands about their responsibilities for world affairs, leading up until today where inequality has become a business matter. This raises several questions, of course, but one which we should constantly be asking ourselves and our politicians is this: what are the best and most just ways of combating inequality?

Christian Olaf Christiansen is an intellectual historian from Denmark. He is currently working on a comparative intellectual history of socioeconomic rights and market-based approaches to global inequality, c. 1970-2000. He is the author of Progressive Business: An Intellectual History of the Role of Business in American Society (Oxford University Press, November 2015).