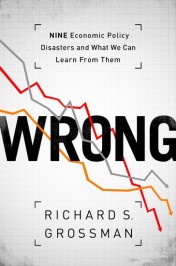 Seven years ago this month the federal funds rate—a key short-term interest rate set by the Federal Reserve—was lowered below 0.25%. It has remained there ever since.

Lowering the fed funds rate to rock-bottom levels did not come as a surprise. The sub-prime mortgage crisis led to a severe economic contraction, the Great Recession, and Federal Reserve policy makers used low interest rates—among other tools—in an effort to revive the economy. By the end of 2015, the US economy has rebounded. The unemployment rate, which topped out at 10% in October 2009, is now 5%. And GDP is growing at respectable, if not spectacular rates.

And so the big question facing the Federal Reserve is when to start raising interest rates. Those worried that the Fed’s low interest rates will soon generate inflation and a speculative boom argue for the gradual rise to begin sooner—perhaps as early as the Federal Reserve’s mid-December policy-making meeting. These are the inflation hawks. Those more concerned about the less-than-robust recovery of the economy argue for interest rate rises to be postponed into 2016. These are monetary policy doves.

Rather than discuss the merits of each of these arguments, I’d like to focus on the question of who will be making the decision.

The answer is not as simple as you might think.

The top policy making group at the Federal Reserve is the Board of Governors, a group of seven governors, appointed to 14-year terms by the president. Two of those governors are chosen to four year terms as chair (Janet Yellen) and vice chair (Stanley Fischer). Only five of the seven governors’ seats are filled at the moment; President Obama’s nominees for the two open seats have been in Senate confirmation limbo for eleven and five months respectively.

Fully staffed or not, the Board of Governors does not set the federal funds rate—that job belongs the Federal Open Market Committee (FOMC). The FOMC consists of all the governors plus the presidents of five of the twelve regional Federal Reserve regional banks (Atlanta, Boston, Chicago, Cleveland, Dallas, Kansas City, Minneapolis, New York, Philadelphia, Richmond, San Francisco, and St. Louis). The president of the New York bank is always on the committee; the presidents of Chicago and Cleveland serve every other year; the other nine presidents serve every third year.

OK, so now you have learned more than you ever wanted to know about the structure of the Federal Reserve System.

The big question facing the Federal Reserve is when to start raising interest rates.

But is it relevant to the future path of interest rates?

As of 1 January 2016, the voting membership of the FOMC will change. The governors and president of the New York Fed will remain on the FOMC, but the presidents of the Atlanta, Chicago, Richmond, and San Francisco banks will rotate off and be replaced by the presidents of the Boston, Cleveland, Kansas City, and St. Louis banks.

Will these personnel changes affect the likelihood that interest rates will start to rise sooner? They may.

Reuters, Bloomberg, and other news sources classify Fed governors and branch presidents as hawks or doves, depending on their attitudes toward inflation.

These personnel changes suggests a slightly more hawkish FOMC in 2016, although the Reuters scorecard suggests that doves will remain in the majority. Further, these calculations omit the potential hawk-dove consequences of the confirmation of President Obama’s two nominees.

A more hawkish FOMC means greater Fed attention to the dangers of increased inflation and that, other things being equal, interest rate increases will become more likely after 1 January.

Whatever kind of bird you are, the Federal Reserve and, especially, the FOMC will be at the very center of economic news in 2016. Get out your binoculars!