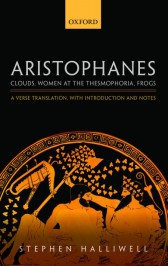 Aristophanes: Clouds, Women at the Thesmophoria, Frogs: A Verse Translation, with Introduction and Notes

This year, 2015, has seen a special landmark in cultural history: the 2500th anniversary of the official ‘birth’ of comedy. It was in the spring of 486 BC that Athens first included plays called comedies (literally, ‘revel-songs’) in the programme of its Great Dionysia festival. Although semi-improvised comic performances had a long prehistory in the folk culture of Athens, it was only from 486 that comedy became, alongside tragedy (which had an older place in Athenian festivals), one of the two defining archetypes of theatre – and, with the passage of time, a concept applicable not just to an artform but to a way of thinking or feeling about aspects of life in general.

Yet if comedy has been an indispensable category in both art and life ever since, it has always been a controversial and problematic one too – a source of mirth and celebration, but with a darker, potentially troubling side that stems from the capacity of collective laughter to humiliate and wound. The history of comedy, both inside and outside the theatre, is littered with attempts to curb or prohibit the power of mockery and satire. Even in classical Athens, the culture that had given comedy a prestigious place in its public festivals, there were intermittent concerns about how far the city could tolerate ridicule of its democratic institutions and policies.

It would be naive, though, to think that when comic freedom is at stake, it is always pitted against those in power. Comedy can just as easily be populist — on the side of the majority, and against individuals or groups who don’t fit in or conform. A fascinating early test-case of such issues is Aristophanes’ play The Clouds, staged in 423 BC, in which the philosopher Socrates is presented as a remote, haughty figure who repudiates normal Greek religion, worships private deities of his own, and runs a special school (the Thinking Institute) in which ideas subversive of traditional morality are taught. Is Clouds, then, a maliciously anti-intellectual comedy? Might it even have contributed to popular hostility against Socrates and the shattering fact of his execution in 399 BC on charges of rejecting the city’s gods and corrupting the young. Can comedy really be that powerful?

Two things in particular have conspired to give these questions a disturbing historical edge. The first is that the surviving version of Clouds ends with the burning down of Socrates’ school (including, so some have supposed, the ‘death’ of Socrates and his pupils) by a disgruntled Athenian who thinks he has been cheated by Socrates: an incitement to violence against dangerous intellectuals, some critics of the play have believed. The second is a notorious passage in Plato’s Apology, a fictionalised version of Socrates’ defence speech at his trial, where the philosopher claims that his slanderers are too numerous to name – ‘unless one of them happens to be a comic poet’. Later in the Apology, Socrates refers explicitly to Clouds as a work which represents him ‘spouting a lot of nonsense on matters about which I know nothing whatsoever’. So we have a document written soon after Socrates’ lifetime’that tells us that Clouds had contributed to the hostile, anti-intellectual prejudices that led to the death of Socrates. Or do we?

Well, the first problem is that Plato’s Apology was written about 25 years after the first and only performance of Clouds. Plato himself was only about four years old in 423 BC and can’t have witnessed the play’s original reception (which was in fact, we know, something of a theatrical failure.) Over that intervening quarter-century, many of those who had seen Clouds on stage must have died (not least in the devastating losses of the Peloponnesian War.) Very few of the jurors who condemned Socrates in 399 can have known much if anything about Aristophanes’ comedy.

Still, it might be countered, Plato could have known, as he grew to adulthood, the sorts of things people said about Socrates, so he could have observed the insidious influence of Clouds in helping to corrode the philosopher’s reputation among his fellow Athenians. Why else would he have inserted those passages in the Apology? But matters are not so simple; even scholars are vulnerable to the uncritical repetition of received ideas. If one rereads those passages of the Apology with sensitivity to context and nuance, it ceases to be clear that they attribute to Clouds any serious influence on popular beliefs about Socrates. The first passage actually goes on to contrast Aristophanes, the unnamed comic poet, with those who have ‘maliciously’ slandered Socrates. And the second passage uses Clouds to drive home the point that it is precisely in a world of comic ‘nonsense’ that certain ideas about Socrates belong.

It’s doubtful, in fact, whether the historical Socrates ever mentioned Clouds at his trial: there is no suggestion of this in Xenophon’s Apology, an alternative version of the defence speech. But whatever Plato’s motives for making him do so, they cannot be shown to involve the claim that comedy helped to ‘kill’ Socrates, only that Aristophanes’ play offered a ludicrously distorted image of the man. But what about the ending of Clouds itself – the burning down of the Thinking Institute? Isn’t that proof of the work’s populist appeal to anti-intellectual sentiment?

No, it isn’t. It is a piece of pantomime theatre (the text proves, for one thing, that Socrates and his pupils do escape), and its dramatic significance only emerges when we read the whole play and take the measure of the Athenian bumpkin, Strepsiades, who perpetrates the arson. Strepsiades is himself mocked remorselessly for ignorance and stupidity at least as much as Socrates is caricatured for hyper-intellectualism. Much of Clouds requires the audience to ‘get’ intellectual ideas that Strepsiades fails to get, and all of it invites them to relish the absurd gap between intellectual and ignoramus, not side with one against the other. Aristophanic comedy, with its heady mixture of fantasy and satire, is too slippery to be reduced to a consistent agenda. It aims to expose almost everything to the bracing challenge of laughter. But it did not encourage the Athenians to kill Socrates; Aristophanes could never have envisaged the very different circumstances in which that tragic event came about.

Stephen Halliwell is Professor of Greek at the University of St Andrews. His verse translations of Aristophanes: Clouds, Women at the Thesmophoria, Frogs has recently been published by OUP. He is also the author of Between Ecstasy and Truth: Interpretations of Greek Poetics from Homer to Longinus and Greek Laughter: A Study in Cultural Psychology from Homer to Early Christianity, which won the Criticos Prize for 2008.