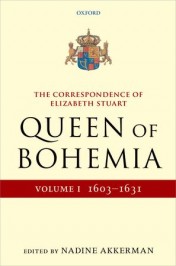 The Correspondence of Elizabeth Stuart, Queen of Bohemia, Volume I

Elizabeth Stuart (1596–1662) was the charismatic daughter of King James VI of Scotland (later James I of England) and Anna of Denmark. She married the Calvinist Frederick V, Elector Palatine, at age 16, and lived happily in Heidelberg, Germany, for six years before being crowned Queen of Bohemia at 23 and moving to Prague. Although she was deposed by Catholic forces after barely a year in power and experiencing only one winter in Prague – hence the soubriquet ‘Winter Queen’ – she never relinquished the title, establishing a court in exile in The Hague, Holland. From here, the outlawed couple fought frantic military and diplomatic campaigns to regain the Palatinate, their lands in Germany which had been overtaken by the Spanish. Although she lived out most of her life in exile, only returning to England in May 1661, her grandson would later ascend the British throne as George I.

The entry in the Oxford Dictionary of National Biography for Elizabeth Stuart gives two dates for her birthday: 16 and 19 August 1596. Her husband’s birthday wishes in a postscript of 1621 establishes it beyond question that the date is 29 August (19 August Old Style). In light of this recent scholarship, the Oxford Dictionary of National Biography will update their entry in 2016. Here are ten other things you never knew about her.

Monkeys, parrots, and dogs. According to the household accounts of her childhood, Elizabeth spent 8 shillings and 3 pence on ‘strewing herbs, and cotton to make beds for her grace’s monkeys’, ‘mending parrot’s cages’, and ‘for shearing her grace’s rough dog.’

Gunpowder, treason, and plot. Guy Fawkes and his cronies weren’t just trying to assassinate King James and Henry, Prince of Wales. Their plan involved abducting Elizabeth, marrying her off, and turning her into a Catholic puppet queen.

Brotherly love. In 1612, when Henry, Prince of Wales, was dying of typhoid, Elizabeth disguised herself as a servant in a vain attempt to gain access to his sick chamber. Fifty years later, she was interred next to Henry in Westminster Abbey, as she had stipulated in her Will.

Daddy’s credit card. Her post-nuptial journey from Margate to Heidelberg took 58 days. By the time she arrived in the capital of the Lower Palatinate, she had given away all her jewels as gifts. King James had to send an ambassador to retrieve the Crown Jewels from her ladies-in-waiting who had left her service.

Cannon fire. The Battle at White Mountain on 8 November 1620 did not take Frederick and Elizabeth by surprise. In letters written from the battlefields of Bohemia, Frederick had been trying to persuade his fearless wife to leave the capital ever since the beginning of September. She steadfastly refused to leave Prague and abandon her subjects. Her secretary Sir Francis Nethersole wrote, ‘we can in this towne heare the Canon play day and night, which were enough to fright another Queene. Her Majesty is nothing troubled therewith’. In the end Elizabeth, eight months pregnant, had to be dragged out by two English ambassadors.

Father complex. She referred to Maurice, Prince of Orange, who had once asked for her hand as a second father. She had a troubled relationship with her own father, King James. He negotiated with her Catholic enemies, but she wanted him to unreservedly engage in battle: ‘I remember neuer to haue read in the Chronicles of my ancestours, that anie king of England gott anie good by treaties but most commonlie lost by them, and on the contrarie by warrs made always good peaces.’ When James sent her a portrait of himself in a casket full of diamonds, she threw the diamonds on the floor shouting how she wished he had sent her soldiers instead.

Resemblance to her godmother. Elizabeth traded on her relationship with Queen Elizabeth I, plucking out her hair to have the same coiffure as her late godmother, wearing her iconic string of pearls and other jewellery that she had inherited, and mimicking her signature when signing letters. One deranged man, John Lambert, actually believed Elizabeth I had taken possession of the body of the Queen of Bohemia. He stabbed her minister Thomas Scott to death to get closer to his beloved Virgin Queen.

Cult of widowhood. After her husband’s death in 1632, the English exchequer paid £1,000 to redecorate the widowed queen’s stately home – ‘all the rooms in the Queen’s house, walls, beds and all, covered with black’. For forty years thereafter all her letters were sealed with black wax and black floss, like mourning cards.

All or nothing. Elizabeth’s stubbornness and political machinations obstructed many peace negotiations, for instance in 1636. Emperor Ferdinand offered her family a compromise: half the Palatinate. It was a kind offer, coming from a man whose Crown they had usurped back in 1619. She insisted on ‘tout ou rien’, however, and persuaded her brother’s ambassador, the Earl of Arundel, to walk away. In 1648 her son would accept the same offer.

Secret codes. She wrote hundreds of letters in cipher code, employing at least seven keys during her lifetime, encrypting her letters herself with hieroglyphics and polyalphabetic substitution systems. Cipher codes were meant to protect her letters from prying eyes – she did everything in her power to stop her father, the Duke of Buckingham, and later her brother from reading the bellicose plans she was devising to undermine the Stuart Crown’s conciliatory tactics.

Whatever happened, her monkey Jack, who had accompanied her to Heidelberg and Prague, still sat beside her in The Hague when she wrote her letters as ‘knauish as euer he was.’

Nadine Akkerman is a Lecturer in Early Modern English Literature at Leiden University. She is the editor of The Correspondence of Elizabeth Stuart, Queen of Bohemia (3 volumes, 2 published to date), for which her prize-winning Ph.D. (2008) serves as the groundwork. In 2015/6 she will be a fellow at the Netherlands Institute of Advanced Studies (NIAS), writing up her monograph on seventeenth-century female spies or so-called ‘she-intelligencers’. She has also been contracted to write a biography of Elizabeth Stuart. Follow her on Twitter @misswalsingham.