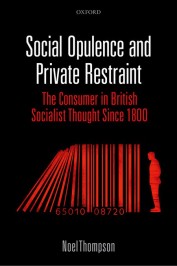 Social Opulence and Private Restraint: The Consumer in British Socialist Thought Since 1800

Corbynomics has yet to be unpacked. And when it is, there’s danger it will be branded as a return to the bad old days of tax and spend, when the 1983 Labour manifesto was dismissed by pundits as the longest suicide note in history. To avoid this, what Labour needs are some big and positive ideas; ideas that that resonate with the public and which capture that popular mood of radicalism that has put Jeremy Corbyn where he is.

In that regard ‘Anti-Austerity’ will not hit the mark. Not least because the negative connotations of the ‘anti’ inevitably begs the question of what a Corbyn-led party is for. And if the answer is simply policies such as investment in public services and a living wage, we return to the danger of the tax-and-spend stigma.

So the challenge is how to avoid this and how to present radical policies that may indeed involve increased public expenditure, and a concomitant private restraint, in a manner that will ignite a popular enthusiasm that transcends the community of activists, young and old, who have put Corbyn as leader of the Labour party. Here, the language used is critical. And while it may go against the grain of some on the Left, Labour must learn and exploit the positive potentialities of the language of ‘consumption’ and ‘the consumer.’

Of course most socialist theorists have always been more at ease with the language of work than that of indulgence; more at ease with workers as sons and daughters of toil than as consumers of goods and services, and trundlers of trollies around shopping malls. As workers their position and role has seemed relatively clear: they would be the beneficiaries of a socialist transformation of society and also the agents effecting that historical change. But as consumers they were problematic. For while theorists understood their material desires; while they appreciated the wanting of those who often led a materially impoverished existence, “the curse of the working class,” in the words of John Burns, was, “the fewness of their wants, the poverty of their desires, the overloading of their sensuous tastes, [and] the absence of a varied set of elevated and healthy aspirations.” In effect they could not be trusted to want the right things.

But alongside what smacked of paternalistic killjoyism went something more positive in socialist thinking: the notion that consumption, if it assumed a social form, could create an enriching ‘social opulence’. This would of course entail investment in social infrastructure — health, education, and welfare services — but also in society’s built, recreational and cultural environment, in its social spaces, in fostering an informed civic engagement, in displaying and celebrating the richness of its cultural diversity (an opportunity here to take a positive attitude to the acceptance of immigrants) and, critically, in cherishing the natural world, whether nationally in terms of our nature reserves and areas of outstanding natural beauty, or locally in treasuring our public parks and gardens.

And it is this concept of social opulence which could use to explicate and sell Corbynomics for it allows public expenditure to be rendered as consumption, a social consumption, that adds to the pleasures and quality of life; that promotes social interaction, social cohesion, and civic engagement; that values the natural world and, critically, with our rapidly growing ageing population, it can be used to send out the message that old age, with all its terrors, is not something that will be faced unsupported. For while the creation of a social opulence entails investing in a society’s future, it will also embrace the obligation to care for those who have contributed to its past.

Moreover there is a considerable body of research that has shown that beyond a relatively modest income level, additional individual consumption adds little or nothing to happiness. But the jaded palate that constitutes a constraint upon the growth of private pleasure does not exist in the case of social consumption.

The concept of social opulence would allow Labour to project itself positively as a Party that is about increasing pleasure, enjoyment, recreation, happiness and the possibilities of a long, active and socially-engaged life. This is what anti-austerity could be made to mean; an enriching social consumption which allows people to live life to the full, so recognising the truth of John Ruskin’s words that “there is no wealth but life.”

Featured image: BRIGHTON, ENGLAND – SEPTEMBER 28: Exhibitors and their stalls are reflected in a Labour party sign on a door at the Labour Party Conference on September 28, 2009 in Brighton, England. Party officials and delegates are gathering in the seaside coastal resort for their last conference before the general election in 2010. (Photo by Oli Scarff). (c) EdStock via iStock.

Noel Thompson is Professor of History at Swansea University. He is the author of Social Opulence and Private Restraint: The Consumer in British Socialist Thought Since 1800.