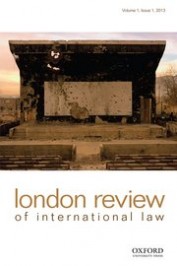 It is said in the domestic practice of law that the facts are sometimes more important than the law. Advocates often win and lose cases on their facts, despite the perception that the law’s formalism and abstraction are to blame for its failures with regards to delivering justice.

In the realm of international law again facts are surprisingly significant, and yet often hard to come by. Courts and tribunals rely on states for evidence, and increasingly too on the media and civil society for the facts upon which to make decisions. Despite the modern proliferation of law-making, institution-building, and dispute resolution, international norms and legal frameworks still require facts.

Notoriously, international law itself is dynamic, often unenforceable, increasingly ‘soft’ in character, subject to intense contestation and disagreement, and characterised by its critics as utopian and otherworldly. International lawyers are sensitive to such criticism and yet it seems that their time has come.

Law students now study international, transnational, or global law in their standard curriculum to prepare for practice in a globalising world. Human rights have become a dominant normative language with which to frame politics and questions regarding responsibility and intervention. International law has entered the mainstream. When countries go to war citizens, the media, and politicians ask, “is this lawful?” Public debate and opinion engages directly with legal norms and frameworks – so too it seems do decision-makers. In the field of international humanitarian law, legalism has become so dominant that we talk of the phenomenon of ‘lawfare’.

Why then do we know so little about the death of Osama bin Laden? And why, until recently, have relevant questions regarding international legal issues flowing from his killing received so little attention in scholarly and public debate? This is an international legal ‘event’ par excellence, but without a corresponding legal analysis and without the material facts.

Such facts as exist are to be gleaned from media reports, official US accounts, first-hand accounts given by a former SEAL who claims to have been the shooter, and the images provided both in official publicity, but also crucially in film. The film Zero Dark Thirty has dominated popular perceptions of the hunt for bin Laden and acts as a framing mechanism for understanding both the event itself as history and as a mission for the Navy Seals involved, but also as highly ambiguous, unresolved, and contentious.

While few have directly contested the official narrative provided, many have criticised the film and its perceived association with government and the US intelligence services. But despite its mainstream allure, the film does not offer the material facts we need. Whilst it alludes to the unlawful nature of torture at CIA black sites in the hunt for bin Laden, it is silent as to the international legal issues arising from the killing itself. Was it lawful, can the incursion into Pakistani territory be justified, was bin Laden a present threat in terms of terrorism, did elements of the Pakistani military and/or intelligence services know of bin Laden’s whereabouts, and what responsibility should ensue?

At the time of writing this post, that ambivalence and silence is shifting. A recent feature in the New York Times Magazine asks “What Do We Really Know About Osama bin Laden’s Death?,” with Jonathan Mahler observing that the “official narrative of the hunt for and killing of bin Laden at first seemed like a clear portrait, but in effect it was more like a composite sketch… And when you studied that sketch a little more closely, not everything looked quite right.” A Washington Post article has responded with the retort – “What do we know about Osama bin Laden’s death? Quite a lot, actually” with Greg Miller writing that “the reality is that there is remarkable agreement across antagonistic governments, credit-hungry security agencies and fiercely competitive news organisations on the most salient facts: that bin Laden was killed in a raid by US Special Operations forces conducted without the cooperation or awareness of the Pakistani government after a decade-long CIA manhunt.”

But doubts about ‘the greatest manhunt ever’ remain. Sceptic-in-chief, Seymour Hersh first stirred the pot with a long piece in the London Review of Books. But suggestions were made that Hersh, whose long and distinguished investigative career includes scoops such as the My Lai Massacre and Abu Ghraib, had failed to get his controversial piece published in The New Yorker and that his sources were thin on the ground. Attempting to prod our collective amnesia, Hersh points to the US Senate Intelligence Committee’s findings that called into question claims that the CIA’s torture program had contributed to intelligence that led to bin Laden.

This false premise formed a central plank in the narrative of Zero Dark Thirty. Hersh’s target is the lying that he alleges “remains the modus operandi of US policy, along with secret prisons, drone attacks, Special Forces night raids, bypassing the chain of command, and cutting out those who might say no.” He calls into question the factual matrix provided and its faithful dramatization by Hollywood, but intriguingly his own critics rely on this very absence of facts to undermine the credibility of Hersh’s reporting. Without more his accusations are said to fly close to conspiracy theory – though a theory that is now finally appearing to gain the mainstream media’s interest and the public’s attention.

For too long the killing of bin Laden has been allowed to be framed as entertainment or as revenge and even catharsis. By keeping the detail of the material facts at one remove, in the realm of intelligence and the secrecy-driven War on Terror, the Obama administration has also kept the law question at bay. For if the facts often trump the law, equally it can be said that the law without facts can flounder. International legal analysis and institutions deserve better facts in this case, and in many others.