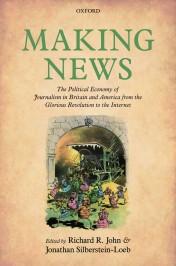 Making News: The Political Economy of Journalism in Britain and America from the Glorious Revolution to the Internet

Journalism is in trouble and democracy is at risk. Countless editorialists have sounded this ominous warning in the past few years in Britain and the United States.

For over two centuries, newspapers were the dominant news medium. Yet today ‘dead tree’ media-like stamp collecting is, well, so twentieth century. Now that millions of Americans get their news from social media on-line, newspapers have been in free-fall, prompting many pundits to wonder aloud if journalism has a future.

Contrary to what seems to be a common assumption, newspaper journalism has long been funded mostly not by subscribers but by advertisers. Not even the street-wise ‘newsies’ of Broadway musical-fame could guarantee the revenue that Joseph Pulitzer or William Randolph Hearst needed to balance their books. Advertisers footed the bill.

The rise of the Internet had dried up much of this revenue, confronting the journalistic profession with an existential crisis. Yet this is not the crux of the problem. At the heart of the current crisis of journalism is a simple fact that we ignore at our peril: news reporting has almost never paid for itself. To provide the citizenry the information we need to remain well-informed, journalists for centuries designed market-limiting institutional arrangements that ranged from government subventions to legally enforced cartels. Market failure has gone hand in hand with journalistic success.

Can the unregulated Internet dreamed of by technophiles solve our problems? If history is any guide, the answer is a resounding no. The history of journalism provides little warrant for those who assume that market forces will somehow provide the citizenry with the news it needs. ‘Net neutrality’ is the Social Darwinism of the digerati. The marketplace of ideas has been, paradoxically, the most robust when market forces have been held in check.

For journalism to thrive, as it must, and if democracy is to endure, new institutional arrangements must be devised to enable journalists to build and sustain the enduring organizations that have always been necessary for the creation of high-quality news. Faddish stopgaps like citizen journalism can do little to solve the fundamental problem: high-quality journalism is expensive, and some way must be found to foot the bill. By understanding how journalism worked in the past, we can help ensure that it has a future.

Richard R. John is a Professor of History and Communications at Columbia Journalism School, Columbia University. He is a historian who specializes in the history of business, technology, communications, and American political development. He is also the author of Making News: The Political Economy of Journalism in Britain and America from the Glorious Revolution to the Internet (Oxford University Press 2015).