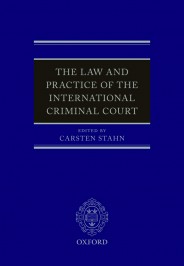 The Law and Practice of the International Criminal Court

It has become topical to say that the International Criminal Court (ICC) is in crisis. For some, the ICC has stepped from crisis to crisis. Even before its existence, the Court has been for criticized for its selectivity, statutory limitations, and potential overreach. In practice, critiques have arisen in relation to almost each situation: impartiality and peace and justice dilemmas in Uganda, evidentiary and performance problems in relation to the DRC (e.g., provider confidentiality, intermediaries), enforcement dilemmas in Darfur, politicization and sustainability issues in Libya, inaction critiques in relation to Colombia, and evidence and cooperation problems in Kenya. As Iain Macleod and Shehzad Charania rightly point out in their post, the ICC faces serious challenges in relation to credibility, legitimacy, and expectations. I would like revisit some of these critiques. Looking back at the past decade, it seems that both the work of the ICC, and some of its criticisms, deserve further scrutiny.

The Court is fallible, like any institution. ICC practice is characterized by overreach and under-reach. Preliminary examinations of the Court have turned into one of the most significant instruments of Court practice. The use of ICC intervention as political or hypothetical argument plays an important role in institutional politics and peace negotiations. In environments such as Ukraine, Palestine or Syria, there is a risk that the ICC turns into an instrument of lawfare. The Court’s strong virtual presence contrasts with the more limited trial record of the Court and some of the unintended or contested effects that ICC intervention produces. The Court struggles to meet some of the expectations that it faces. Concerns have been raised in relation to the expeditiousness and fairness of proceedings and the treatment of victims (participation, reparation). It has become doubtful whether the Court should too easily proclaim that its goal is to strengthen domestic jurisdiction or that the absence of cases is a success.

But it is also key to critically examine critiques of the ICC. Critique is often a reflection of deeper frictions that the Court itself is unable to solve: historical inequalities, geo-political frictions, or tensions between global, regional, and local interests. Political violence in many ICC cases has complex causes and origins. Treating the Court like a tool that can be turned on and off like an electronic device to fix accountability dilemmas is likely to result in artificial quick-wins, or long-term failure.

A balanced assessment of the Court requires a fresh look at fair and unfair critique. There is first a need for a certain sense of modesty. The ICC isn’t the solution to all accountability problems, nor is international criminal justice in itself suited to ‘solve’ or fix deeper societal divides. It might be counterproductive to present it as a source of salvation.

Second, it is becoming clear that whatever international justice institutions do, the ICC is likely to disappoint one constituency or another. Where they act, they may criticized for interfering with political priorities, such as negotiations or political settlements. Where they are absent, such as in Syria or North Korea, their absence is deplored.

Third, what is presented as a tension might not always be a ‘negative’ tension. The Statute is full of ambiguities and dilemmas that cannot be solved in the abstract. Ultimately some of these tensions may be ‘positive’ rather than ‘negative’ tensions. Take the debates on ‘peace and justice’ for instance. Intervention in ongoing conflict remains a problem for the ICC and is likely to remain a challenge in the future. It is necessary to refine risk assessment, sequencing, timing, and modalities of Court action. But without the ICC, would there not be a piece of the puzzle missing (e.g., Colombia)?

Similar considerations apply in relation to the role of victims. While there are many valid criticisms of ICC action (e.g., epistemic, capacity, and sociological critiques), the tension seems ultimately to be a ‘positive’ one. It forces international criminal justice to re-think its identity, and articulate its space in the context of mass violations, also vis-à-vis human rights law and transitional justice strategies.

Historically, much focus has been placed on ‘grand’ decisions in international criminal law. This trend may be shifting. There have been relatively few ‘signature’ decisions in the ICC context: decisions on the ‘policy’ element of crimes against humanity; the interpretation of modes of liability or reparations; and contested ones, such as on head of state immunity or the power to compel witnesses to testify. But they mark only a tiny fraction of Court activity. It seems that the many of the core issues are developed through practices, policies, and procedural decisions that aren’t in the limelight. In that sense, ICC practice may be emblematic of the transformation of international law, which develops increasingly bottom-up, rather than top-down.

Structurally, international criminal justice in The Hague is somewhat introverted. In some fields, such as sexual- and gender-based violence, the Rome Statute and its procedure are still way ahead of domestic law, and might set important examples. But international criminal justice should be weary of the ‘export of global justice’. In the ICC context, there is sometimes a drive for emancipation, rather than structural openness. Some ICC intervention have been perceived as stifling domestic or local responses, or creating local inequalities (e.g., funding). One of the challenges is to mitigate the risk that Hague justice promotes predominantly global justice, rather than regional or local justice.

Second, the docket of the ICC has been full and rich in terms of crisis situations. There may be sometimes an attempt to try to do too much at the same time. In some respects, less may be more. A few better prepared cases might leave a larger imprint.

Third, there is a certain degree of duplication in terms of procedures. This applies in particular in relation to pre-trial and trial. Sometimes, different Chambers seem to re-invent the wheel. The destiny of the defendant might largely depend on what Chamber he or she faces. This is unsatisfactory on the long term, and will need to be looked in the future.

More fundamentally, there is the existential question: How can the ICC leave a lasting impact although it has to be selective by definition? Should it carry out ‘thematic’ investigations and prosecutions, that signal that certain contemporary forms of atrocity violence, such as electoral violence (Kenya), gender-based and sexual crimes, destruction of cultural property (Mali), or certain types of human tracking are outlawed? Or should it adopt an approach in which it goes deeper into specific conflict situations?

The first approach is appealing. It keeps the ICC at the heart of contemporary challenges, such as ISIS or migration dilemmas, and may enhance its expressivist function on a global scale. But it also has certain risks and drawbacks. Practice in Kenya and the DRC suggest that a few thematic investigations and prosecutions alone may not suffice alone for the ICC to build a strong case and evidence base, or leave a sustainable impact. In some cases, withstanding public pressure to become involved without a might be a legitimate choice, or at least a feasible technique of damage-control, given that other situations under ICC scrutiny won’t simply disappear from the docket.