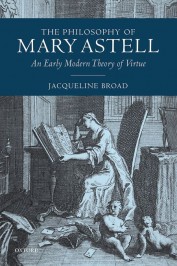 The Philosophy of Mary Astell

Philosophers have been happily borrowing and stealing ideas from others for centuries. We like to call it “research.”

For the most part, the practice of philosophy tends to be collective and conversational and collaborative. We enjoy reading what others have written on a given topic, and we like to hear what others have to say, because different people see things differently. Their comments and criticisms can open our minds to uncontemplated truths, or else they can encourage us to close ranks, and strengthen our arguments, in light of opposition.

Face-to-face, this practice is not always for the faint-of-heart and thin-of-skin. The argumentative nature of the discipline can be challenging for introverts and for those with a disposition toward politeness and common human civility.

But the funny thing is, despite its brutal reputation, philosophy is actually quite inclusive by nature.

For many philosophers, it doesn’t matter if their interlocutors are under-educated, under-privileged, under-aged, or even under-the-ground. (In fact, it’s often better if combatants are dead, lest they protest about misrepresentations of their views.) All that matters is that free exchange of ideas and the open spirit of inquiry.

Seventeenth-century thinker John Locke is a case in point: he went out of his way to converse with strangers, we are told, because he thought “he could learn something which was usefull, of every body.”

But here’s my problem: I think that the discipline of philosophy has been rather slow to recognise this collaborative history.

If an outsider were to take a quick glance at the history of philosophy—at one of the many textbooks, say, on The History of Western Philosophical Thought—the chances are that he or she would be left completely in the dark about the conversational and cooperative aspects of the discipline.

Worse still, I think, she would be left ignorant about its history of gender-inclusivity.

Until very recently, the history of philosophy has focused on those singular male geniuses who published their great treatises, and presented their startlingly original ideas like so many fully-formed Athenas bursting forth from the head of Zeus.

Descartes himself once declared that he “did not wish to consider what others have known or not known.” And Hobbes likewise asserted “that if he had read as much as other men, he should have known no more than other men.”

But I think these philosophers were probably touting a bit of a myth. Surely those original thoughts couldn’t have burst forth fully developed in their minds, any more than a woman could have emerged from the flip-top forehead of a Greek god?

Moreover, the surviving historical-contextual evidence shows these same men did work out their ideas in collaboration—face-to-face, in letters, in objections and replies, in tedious mind-numbingly long-winded exchanges spanning over many, many years—and sometimes, even, with women.

That’s right. The evidence suggests that women have always been doing philosophy—have always been there, writing, discussing, objecting, frowning, and flinching—alongside their male colleagues.

So why have we been so slow to recognise their participation? And what would the history of philosophy look like if women’s contributions were duly acknowledged?

I’m not sure that there are any simple answers to the first question—that might take a whole book. But the latter is a subject that myself and a number of my colleagues have been addressing over the past few decades as part of a collective Recovery Project, a project to write women philosophers back into the history books.

We have found that, often, these women do not sound too different to their male peers: they use the same terminology, they discuss the same philosophical conundrums, and they sometimes come up with similar solutions. But there’s also something else—a slight difference in emphasis, I think.

This is not surprising given the circumstances in which these women wrote.

Consider the early modern women philosophers, such as Margaret Cavendish, Anne Conway, Damaris Masham, and Mary Astell. These English gentlewomen found themselves in situations of financial dependence on others, they had only a limited education, and they had few paths open to them with respect to achievement and opportunity. They also had to tolerate certain oppressive gender practices of their time, and pernicious stereotypes and biases against women.

Meanwhile, the gentlemen of their era were really at the Top of the Tower, so to speak. They were well-educated; they were lawyers, physicians, diplomats, university lecturers, and political advisers. As a result, their view from the top was expansive and universal—they could see the socio-political world as a whole and this was reflected in their work.

Comparatively, their fellow women were pretty much stuck at the bottom of the tower—putting out the washing (figuratively speaking) and giving the next generation a good telling-off about the rules of common human civility.

Not surprisingly, their outlook on life is a little bit different. Their moral philosophy focuses on the other-related virtues of humility, generosity, and disinterested benevolence. Their political philosophy is opposed to the slavery of women in marriage, and they valorise an internal notion of freedom as rational self-governance. Their metaphysical views address problems arising from a strict dualism between mind and body.

It’s too early to say if these women practised philosophy “in a different voice,” i.e. with a distinctively female or feminine outlook (many of their moral views actually sound like those of the male Stoics).

But what we do get is their ‘View from the Ground’—and I think that’s a good thing. As Locke would say, it might teach us something useful.

Ten things you may not know about women and liberty