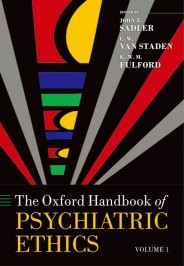 The Oxford Handbook of Psychiatric Ethics

Each year in July, I greet a new group of post-doctoral psychiatric trainees (‘residents,’ ‘registrars’) for a year’s work in our psychiatric outpatient clinic. One of the rewards of being a psychiatric educator is witnessing the professional growth of young clinicians as they mature into seasoned, competent, and humanistic psychiatrists. Over the course of my year, and in our residents’ stage of training, the most dramatic change is not in developing their skills as clinical interviewers, nor in expanding their knowledge of psychopharmacology, or refining their insights as psychotherapists, but in transforming their very perceptions of patients.

When they begin in July, their major concern is to learn about their patients, from the medical record as well as from the patient themselves. They inherit a panel of patients from their predecessors, and over the course of the year, evaluate and work with new intake patients. In the late summer months and into the fall, they consider the evidence base of the patients’ treatments, they are concerned if this or that patient is ‘really’ bipolar, and they try to grasp and understand the patient’s psychopathology. They wrangle with patients’ polypharmacy, wean them off of their chronic benzodiazepines, check for drug interactions, and get them social service assistance for everything from dentures to fallen roof repairs.

Instead of a case they see a multidimensional human being, imbued with dignity, noble in the glory of their diversity.

By the Texas wintertime they have become familiar with their patients, and start to engage more with discussions of their patients’ lives rather than their symptoms and problem list. This is where the magic starts.

But something else happens during these late spring to summer months. Their perception of the patients themselves transform. Instead of a case they see a multidimensional human being, imbued with dignity, noble in the glory of their diversity. A few of the residents become aware of the transformation of their own perceptions, and often express a sense of the privilege they have in engaging with people’s lives in such an intimate way.

This change in perception of patients is even more profound as they finish up their year. The American internist George L. Engel, the originator of the ‘biopsychosocial model’ of medical practice, was fond of telling a story about his own transformation through medical education. Before his medical training, he would encounter a homeless man on the street and hear a dry, hacking cough. By the end of his training the tubercular nature of the cough would announce itself to him. Thus his perception changed from a simple cough to the immediate perception of disease. Like Engel, our residents’ perception of patients transform through learning and experience. However, in our year the residents’ perception transforms from patients-as-cases to patients with human dignity restored. This restoration of dignity is independent of the patients’ restoration of physical or mental health; the change is in the doctor, not the patient.

Unfortunately, as we recognize World Mental Health Day on 10 October 2015, we should appreciate that too often the ideal of full dignity for all is not met everywhere, including in our own mental health neighborhoods and communities. Thanks to a robust and invigorated group of mental health service users around the world, social and political structures are being created in many countries that not only recognize the dignity of all, but imbricate this dignity by embracing our patients and service users as full partners – ‘co-producers’ – in not only how services are designed and treatments are provided, but also how service users are described and understood. Mental health services around the world, using practice models such as “values-based practice” are rethinking not just treatment of the mentally ill, but the terms of engagement, the design of services, and the negotiation of clinical relationships. The restoration of dignity may begin with the development of mental health services, but is not realized until all voices in the community are engaged fully, and dignity is a matter of perception, not construction.

John Z. Sadler is a Professor of Psychiatry and Clinical Sciences and the Daniel W. Foster, M.D. Professor of Medical Ethics at The University of Texas Southwestern Medical Center in Dallas, Texas. Dr. Sadler directs the Division of Ethics in the Department of Psychiatry and the Program in Ethics in Science and Medicine institution-wide. During his career at UT Southwestern, Dr. Sadler has provided clinical ethics consultation for 25 years and research ethics consultation for eight years. He is a co-editor of The Oxford Handbook of Philosophy and Psychiatry, co-editor, with K.W.M Fulford, of the journal Philosophy, Psychiatry, & Psychology (Johns Hopkins University Press), co-author with Jennifer Radden of The Virtuous Psychiatrist, and author of Values and Psychiatric Diagnosis.