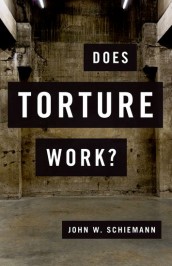 In early July, the American Psychological Association (APA) released an independent report detailing collusion between the APA and the Bush Administration on abusive interrogation techniques. The 500 plus page Hoffman report found that a small group of APA officials colluded with counterparts in the Department of Defense (DOD) to create and staff a committee whose charge was, among others, to draft guidelines and principles for participation by psychologists in interrogations. The result of this collusion was a report and ethics guidelines that enabled abusive interrogations rather than prevented them. In response to the report, four top APA officials were fired, resigned, or retired early and the association voted overwhelmingly to ban psychologists from “participating in national security interrogations” at its annual meeting in early August.

Another revelation in the report received much less attention. From both news reporting and the Senate Intelligence Committee investigation (SSCI Report) of the CIA program, it is by now well known that psychologists James Mitchell and Bruce Jessen designed and participated directly in the CIA interrogational torture program. It is also generally known that Mitchell and Jessen’s sales pitch to the CIA—bought hook, line, and sinker—was that they could reverse engineer the SERE military training program to get valuable information from terrorist captives. What was not well known until the Hoffman report is just how uncertain Mitchell himself was about the effectiveness of their torture methods after they had sold it to the CIA and while they were actively torturing detainees at CIA black sites overseas.

First, a bit of background. SERE (Survival, Evasion, Resistance, and Escape) is a military program for select troops designed to familiarize them with the effects of the torture and abuse they might experience if captured. As part of the training, the troops are given “secrets” they are to try and keep while subjected to mock capture, imprisonment, and abusive interrogations. Mitchell and Jessen worked in the SERE program, and were tasked with evaluating and monitoring both the interrogators and guards on the one hand and the trainees on the other. Their job was to ensure the mental health and safety of the participants.

Having already retired from the Air Force and gone into private consulting by 9/11, Mitchell was well-positioned to leverage his SERE experience into a CIA contract. And he and Jessen certainly did leverage it, to the tune of $180 million ($81 million of which had actually been paid when the CIA terminated the contract in 2009). By August 2002 they were in Thailand torturing their first victim, Abu Zubaydah, with the full panoply of the “enhanced” techniques.

But Mitchell had a problem. The philosophical principle behind the SERE techniques is “learned helplessness,” the idea that abusive conditions will “regress” a person to an “infantile” state such that he is completely dependent upon—and so compliant with—his interrogator. North Korean and Chinese forces were believed to have induced such states in captured pilots and used their compliance to generate false (and ludicrous) confessions. Mitchell was confident he could also induce helplessness and compliance but was concerned about how to generate good information and not false confessions. He could take apart the tank; the trick was to build a fighter jet out of it.

Much of the criticism of Mitchell and Jessen’s approach rests on the assumption that they either failed to recognize the problems of false confessions and bad information or simply did not care. This, the Hoffman report makes clear, does not give them quite enough credit. They knew the effectiveness of their torture program hinged on the ability to detect deception. The trouble was that they also knew that was a very difficult thing to do.

This is where the APA comes in. In March 2003, around the time Mitchell and Jessen were personally waterboarding Khalid Sheikh Mohammed (KSM) so severely that one observer described them as “near drownings,” the CIA spearheaded an initiative with the APA to host a conference on detecting deception, eventually held in mid-July (SSCI Report, 111). The timing was no doubt helpful for Mitchell and Jessen, for they would have learned the month before that much of the information they had extracted from KSM under their torture in March had been retracted. It turns out that there was no attempt to recruit African-American converts in Montana to Al Qaeda’s cause.

Both Mitchell and Jessen attended the conference and Mitchell got straight to the point right away, in the opening session, indicating his interest in the “practical application and operation of deception. [He was] not looking for what is already in the literature or in meta-analyses, [but rather] wants to know, if we are interviewing a terrorist, how can we tell if he is lying” (Hoffman Report, 176).

The CIA liaison with the APA arranged with the APA organizer to assign Mitchell and Jessen to the working group on interrogations and debriefings. With Mitchell repeatedly saying that more studies and data were needed to address the “empirical question” of detecting deception, the CIA liaison called for research proposals at the end of the conference. A month later, an APA official was told by the CIA liaison that “[y]ou won’t get any feedback from Mitchell or Jessen. They are doing special things to special people in special places, and generally are not available” (Hoffman Report, 179). From the Senate Intelligence Committee’s December 2014 report on the CIA torture program (SSCI Report), we actually know a little about some of these “specials,” at least for Jessen.

Within a month or two of the conference, Jessen was at the notorious Salt Pit in Afghanistan. While there, he personally tortured Hambali, an Indonesian terrorist operative, by stripping him naked and shackling him in a standing stress position to deprive him of sleep (SSCI Report, 77, 108). According to CIA cables, Jessen and other interrogators questioned Hambali about Khalid Sheikh Mohammed’s efforts to recruit pilots for another airplane attack on the United States. “With the gradual ramp-up of intensity of the session and the use of the enhanced measures, [Hambali] finally stepped over the line and provided the information,” according to a cable at the time (SSCI Report, 256).

And the information obtained from Hambali? It turned out to be false. Another month or two later, Hambali told other CIA debriefers how, through statements read to him and constant repetition of questions, he was made aware of what type of answers his questioners wanted. [Hambali]…merely gave answers that were similar to what was being asked and what he inferred the interrogator or debriefer wanted, and when the pressure subsided or he was told that the information he gave was okay, [he] knew that he had provided the answer that was being sought” (quote from CIA officer in SSCI Report, 108).

The CIA debriefers considered his claims to having lied about recruiting a pilot and other information to be “credible.”

Although Mitchell and Jessen would continue torturing for the CIA through to the last detainee in 2007, it would appear that the CIA never got the data it wanted on either detecting deception or the effectiveness of its torturous interrogations. Despite the fact that Mitchell and Jessen’s original agreement with the CIA called for them to determine whether and how well their methods worked, Mitchell told the Hoffman investigators that “they never fulfilled the part of the contract calling for an evaluation of the effectiveness of the program, because the contract was terminated” in 2009.

The tank never did fly.

John W. Schiemann is the author of Does Torture Work? and Associate Professor of Political Science at Fairleigh Dickinson University.