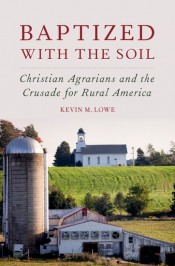 Baptized with the Soil: Christian Agrarians and the Crusade for Rural America

In the United States today there is a great push to get children outside. Children stay indoors more and have less contact with nature and less knowledge of animals and plants than ever before. When children do go outside, our litigious society gives them less freedom to explore. Educators and critics such as Richard Louv and David Sobel express a concern that without a real connection to the natural world, something vital will be lost in the next generation — and that the challenges of climate change may be unsolvable.

Americans have been agonizing about this disconnect for a long time. At the turn of the twentieth century, educators around the country were already arguing that children were losing their sympathy for nature and the earth. They attributed that change largely to rapid industrialization and urbanization. The younger generation, along with waves of immigrants from overseas, was leaving the countryside and moving to cities in alarming rates, in search of better opportunities. But many of those cities were full of soot, smoke, and garbage, and many of the industrial jobs available were hazardous and exploitative.

What to do? Like today’s advocates of forest kindergartens and free-range parenting, the early twentieth-century leaders of the nature study movement believed that contact with nature was vitally important for children. By exposing schoolchildren to the natural world in a direct, hands-on way, nature study would help increase children’s sympathy for the earth and help them to become better stewards not only of nature but also of their communities.

The architect of the nature study movement was an academic horticulturalist named Liberty Hyde Bailey (1858-1954). A largely forgotten figure today, Bailey’s star has dropped except in horticultural circles, where he is remembered as an inveterate plant collector and inaugural dean of Cornell University’s College of Agriculture and Life Sciences. Yet in his day Bailey was the very definition of a public intellectual, widely renowned and beloved, whose expertise and public commentary ranged over a huge variety of topics, from plant science and agriculture to weather, poetry, and the promise of global democracy.

“If education has any value it is to make a man’s life deeper and richer,” wrote Bailey in 1903, “and this can be more readily secured by giving him a better hold on the common things with which he lives.” Nature study, as Bailey saw it, began with the local and the commonplace and worked outward toward larger principles. During school lessons, children were expected to observe the nature that was closest at hand — insects, apples, tree twigs, toads — and learn everything they could from their observations. “Object lessons” put plants and animals directly into children’s hands, asking them to learn not only facts but an appreciation of organisms as living beings. What are the veins on a leaf for? Why do grasshoppers have longer back legs? How does a crayfish walk? Where do snakes go in the winter?

Nature study advocates believed that whether children lived in the country or the city, they would benefit from developing sympathy for the natural world around them. More than anything, “sympathy” meant to Bailey something deeply spiritual. He reiterated in a 1903 book that contact with nature would broaden children’s horizons and help them to appreciate their surroundings: “Nature-love tends toward simplicity of living. It tends country-ward. ‘God made the country.’….One sleeps in the woods or fields not because these are the most comfortable places in which to spend the night, but that he may have communion and freedom.”

Bailey expanded upon these ideas in his 1915 book The Holy Earth, which sets forth a deeply ecological vision of life on earth. The earth was holy ground, Bailey believed, “because man did not make it. We are here, part in the creation.” To call the earth holy was not a metaphor for Bailey; it was literal truth. The earth was sacred and could not be abused. “If the earth is holy,” he wrote, “then the things that grow out of the earth are also holy. They do not belong to man to do with them as he will. Dominion does not carry personal ownership.”

For Bailey, the ultimate goal of nature study was to teach children about the holy earth. By training the nation’s youth to feel at one with the natural landscape and its creatures, nature study would help bring forth what Bailey called the “new hold”—the “philosophy of the oneness in nature and the unity in living things.” The spirituality of nature study would root children more deeply in the landscape and teach them about their surroundings, in order that they might more fully make the holy earth their home.

Today, many religious traditions are talking quite a lot about the responsibility of stewardship that humans bear toward the rest of the earth. Pope Francis’s recent encyclical Laudato si is only the most recent example. But nature study went a step beyond stewardship. As we encourage our children to put down the smartphones and go outside, are we willing, like Bailey, to take that step and see the earth as holy?

Kevin M. Lowe is an independent scholar of American religious history. He holds a doctorate from the Pennsylvania State University, and is the author of Baptized with the Soil: Christian Agrarians and the Crusade for Rural America.