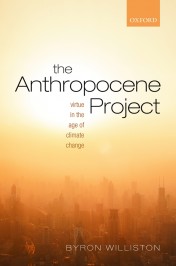 The Anthropocene Project: Virtue in the Age of Climate Change

What should we make of Chancellor George Osborne’s recent claim that we need a “comprehensive plan” to address the burgeoning Syrian refugee crisis, a plan that addresses the “root causes” of this tragic upheaval? The UK government’s way of framing the issue is not unique. Many other governments as well as political pundits of various ideological stripes have been urging us to see the issue in precisely these terms. Invariably, such responses point to the twin evils of Bashar al-Assad and the Islamic State of Iraq and the Levant (ISIL) as the fundamental problems. In Osborne’s case this identification is then used as justification for advocating the expansion of RAF strikes into Syria (among other things, like creating ‘safe havens’ for refugees). Assad is surely evil—ISIL no less so—but are they alone the “root causes” of the refugee crisis in Syria and beyond? The answer is no.

Whether we are talking about immigrants seeking to enhance their economic prospects or refugees fleeing political repression, human migration is an extraordinarily complex phenomenon. Large-scale migration is rarely traceable to a single root cause. For example, evidence is now mounting that the flow of refugees out of Syria was preceded by a huge internal displacement of people and that the key cause of this internal flow was anthropogenic climate change. In a landmark study published in 2015 researchers have established causal links between climate change and the following events: (a) historically unprecedented drought conditions in Syria beginning in 2007; (b) huge agricultural failure in the region; (c) the migration of some 1.5 million people from rural to urban areas in Syria; and (d) the civil unrest that festered on the peripheries of these urban areas as Assad ignored the emerging problems of crime, overcrowding, unemployment, and an increasingly violent struggle for dwindling resources. When people protested, Assad turned violently on them, deepening and spreading the chaos.

The problem is, moreover, likely to get worse, and not just in Syria. The age of climate change is going to be the age of human displacement, though we can’t be certain just how many people will be on the move. This demographic alteration should put enormous pressure on governments to behave in ways that do not exacerbate social conflict, and obviously not all of them will be able, or inclined to do so. Assad may be just the first in a long line of dictators whose repressive actions are enabled by the environmental effects of climate change.

So how should we respond to this new reality, now and in the future? At the risk of substituting one over-simplified root-cause explanation with another, here’s a deliberately provocative counterfactual. Absent the climate change that we in the rich part of the world have mostly caused, there would have been no large-scale internal displacement of Syrian people from rural to urban areas over the last 10 years or so, hence little ensuing urban unrest, in which case Assad would likely not have been provoked to attack his own citizens. As a result, there would have been far less scope for ISIL to operate and no significant refugee crisis. In other words, our failure to curb our carbon emissions is an undeniable part of the larger story here. If we are going to talk of root causes let’s at least do so in a genuinely comprehensive way rather than cherry-picking the facts to fit a particular policy agenda.

Government officials can claim to accept the science of climate change and yet fail resolutely to notice some of its thornier ramifications, like increased migration and civil conflict in certain parts of the world. Other things equal, you are morally responsible for ameliorating harms you are causally responsible for producing. This homely truth has immense ethical implications for how we in the industrialized world respond to crises like these. For one thing it places an obligation on many of us to increase the number of refugees we are prepared to accept. Germany’s plan to take in 800,000 this year is a model target, whereas the UK’s 20,000 over the next five years is clearly inadequate on moral grounds. But being honest about the role played by climate change in creating refugees also serves to focus the mind on real solutions. Because it does nothing to address the climate crisis, bombing malefactors like Assad into submission is not the far-sighted and comprehensive plan its advocates take it to be. Taking the genuinely long view here requires (a) decarbonizing the global economy as quickly as possible; and (b) working on humane and intelligent schemes for adaptation—including a commitment to resettle refugees on an unprecedented scale—to the changes that are now unavoidable.