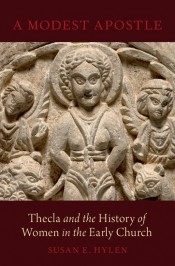 A Modest Apostle: Thecla and the History of Women in the Early Church

There is a good deal of historical evidence for women’s leadership in the early church. But the references are often brief, and they’re scattered across centuries and locations. Two interpretations of the evidence have been common in the last forty years. One claims that women were always excluded from church leadership, beginning with the biblical demand, “women should be silent in the churches” (1 Cor 14:34). The second argues instead that the church was open to women’s leadership in its early years, but excluded women from ordination as church institutions developed.

Although these explanations often represent opposing positions on women’s ordination today, they often share a lot in common in the ways they interpret the ancient evidence. Both interpretations have to explain away evidence that suggests that orthodox women were leaders, and they end up relying on similar arguments to do so. The four myths below can show up in either explanation, depending on who is doing the arguing.

Myth 1. Women were not ordained in the early church.

Many ancient sources identify women office holders. Some are burial inscriptions, like this one: “Tomb of Athanasia, deacon, and of Maria her foster child” (MAMA 3.212b). Some are writings of notable church fathers, who praise women leaders for their outstanding virtue. Other evidence comes from inscriptions donating items to a church, like the inscription on a marble column in a basilica, “Of Celerina, deaconess” (SEG 45-945).

Why did we forget these women? Gary Macy argues that the church revised its theology of ordination in ways that excluded women – but not until the 11th century. Before that, church liturgies included prayers for the ordination of women. As part of the revision process, theologians reinterpreted ancient sources in ways that denied that women had ever been ordained. Apparently their efforts had a lasting effect.

Ancient women were never viewed as the equals of men. In general, social norms and laws allowed men greater freedom and power than women. But this didn’t eliminate the leadership of women, who served as patrons, city officials, and religious leaders. Christian communities seem to have adopted similar patterns. Men were more likely than women to serve in official roles. Even so, women were commonly ordained to tasks their communities deemed important.

Early Christianity is very diverse, so it’s a good idea not to generalize too much. The evidence suggests that women were leaders in many Christian groups, including those we now think of as orthodox. It’s true that some church fathers make explicit statements against women serving in various roles. But these should not be taken as rules that applied to all communities of faith. Tertullian, for example, argues against women’s right to baptize. But other mainstream communities ordained women to play roles in baptism. There is a lot of conflicting evidence about women’s leadership, but it can’t be divided neatly into orthodox and heretical groups.

Myth 3. Women could only lead private groups of women.

Women often did lead groups of women, but in some cases they led men as well. When a leader was chosen for a religious or civic group in antiquity, preference was given to the person of highest status. Women sometimes had higher status than men — due to their wealth or family, or to their extraordinary virtue. If so, they were likely to be chosen as leaders. In a church that put a high value on sexual self-control; single-gender groups were a natural. But men might also seek a woman of acknowledged virtue and status as their leader.

Were these groups ‘private’ rather than ‘public’? Ancient women were ideally described as limited to the private realm. This is somewhat misleading for modern readers, who tend to think of ‘private’ as restricted to the home and domestic labor. For Romans, however, ‘private’ life included commerce, education, religion, and social relations. Women participated in all of these ‘private’ activities, and did so with approval. Religious leadership was also civic in nature because it secured divine favor for the community.

Myth 4. Celibate women could lead, but married women were subject to their husbands.

Some women leaders were married. Women in the Roman world maintained control over much of their property during marriage and thus had access to wealth, an important factor in social status. Like their unmarried counterparts, married women served as patrons, gave gifts, made loans, dedicated buildings and served as civic and religious leaders. Marriage contributed to a woman’s social status, and might therefore increase her opportunities for leadership.

Chastity was a virtue prized by the church in its earliest centuries. Chastity was related to self-control, an important quality of leaders because it meant they could consider the needs of the whole community. So it is not surprising that many leaders were celibate. But chastity was encouraged for all Christians — whether married or unmarried. Christian writers agreed that married persons could — and should — practice sexual self-control. Some women leaders practiced celibacy while remaining married.

Susan E. Hylen is Associate Research Professor of New Testament at Candler School of Theology at Emory University. She is the author of  A Modest Apostle: Thecla and the History of Women in the Early Church.